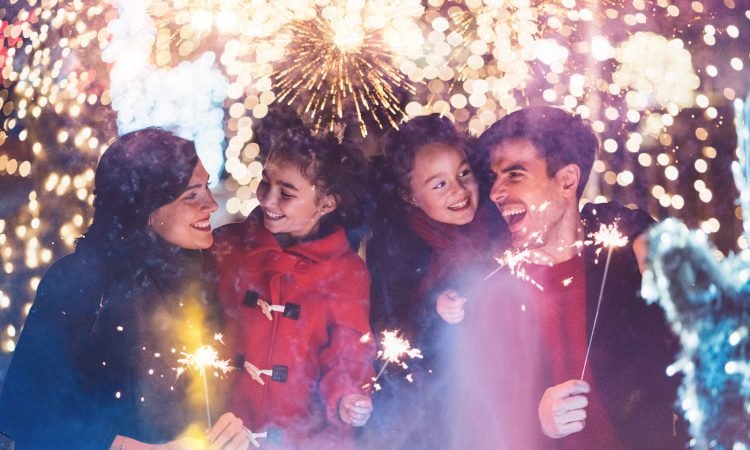 Share
Tweet
Pin
Email
It’s almost time to ring in 2020! Wondering where to spend New Year’s Eve this year? If you’re looking for the top fireworks displays, live entertainment, and cheerful spirit, look no further. From San Francisco and Los Angeles to New York City and Washington DC, so many options abound when it comes to celebrating in the States. Read below to discover the best US cities for New Year’s Eve.

The Best US Cities for New Year’s Eve

The Big Apple brings even more extravagance to the glitziest time of the year. From the Times Square Ball Drop to fireworks over Brooklyn, NYC showcases top-notch entertainment for visitors. Because of its popularity, we advise you to arrive as early as possible to Times Square unless you’re staying in one of the city’s hotels with a good view of the displays. For instance, most guests arrive late afternoon, and the ball is raised to the top at 6:00 pm Eastern Standard Time. Note that the Ball Drop event is free!

Further, visitors can watch fireworks displays in Brooklyn’s Prospect Park, from the Brooklyn Bridge, or on the Hudson River while taking a Harbor Lights Cruise. Even better, many of the city’s top attractions are open on New Year’s Eve before the big events begin such as Central Park, The Met, and the American Museum of Natural History. Also, if you’re looking for parties to attend, NYC delivers.

Who doesn’t want to watch fireworks in Paradise? San Diego, CA presents a great option for NYE revelers, with so many events to attend and attractions to see. One of the best US cities for New Year’s Eve, you don’t want to miss out. From theme parks and dancing in the Gaslamp Quarter to attending elegant events at local hotels, San Diego has it all.

For family-friendly fun, visitors can head to LEGOLAND California and SeaWorld to see fantastic fireworks displays as well as experience thrills on the parks’ beloved rides. Prefer more adult-friendly parties? San Diego’s hotels will host over-the-top shindigs so you can ring in 2020 with flare.
Some of the top parties this year include:

San Francisco takes the holidays seriously, making the City by the Bay one of the best US cities for New Year’s Eve. With so many party cruises, downtown events, and live entertainment taking place, visitors possess loads of opportunities to get down on NYE with friends and family.

For the best fireworks display in the city, you’ll want to claim a spot overlooking the Bay. The 15-20 minute fireworks display dazzles each year and attracts crowds, so plan to arrive early with food and games to pass the time. Note that the display is best seen from along the south end of the Ferry Building, including Rincon Park. 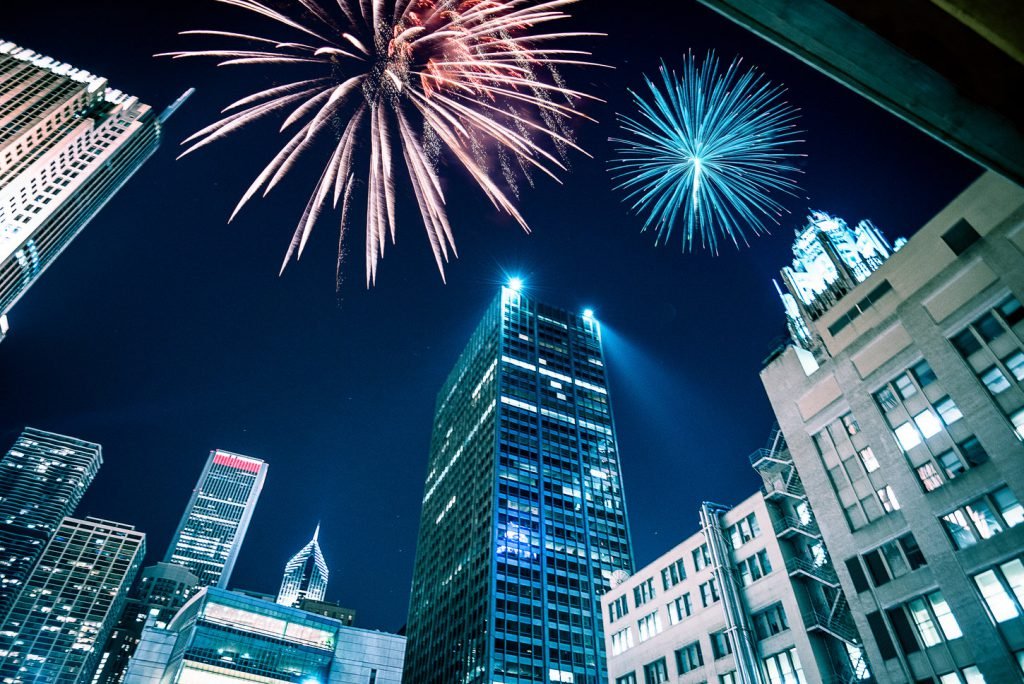 From partying at the Navy Pier and downtown to the city’s local zoos, Chicago turns out for New Year’s Eve! It may be chilly, but that won’t stop the celebrations throughout Chicago’s neighborhoods. One of the best US cities for New Year’s Eve, you won’t be disappointed.

Heading to the iconic Navy Pier in the Streeterville neighborhood? Take in amazing views of the city skyline and Lake Michigan as you watch fireworks going off around the city. Further, visitors can take a NYE cruise, enjoying drinks and music to ring in 2020. Better yet, the annual Chicago Resolution Gala at the Aon Ballroom treats guests to luxury with live entertainment, delicious buffets, a champagne toast, and much more. The largest NYE party in Chicago, you’re bound to start the year off well. Also at the Navy Pier is the Crystal Gardens New Year’s Eve Party, which features upscale entertainment, premium drinks, and much more!

Searching for more unique options? We recommend heading to the Lincoln Park Zoo or the Brookfield Zoo. The Lincoln Park Zoo’s Zoo Year Eve will feature live entertainment, games, giveaways, cash bars, animal experiences, and much more. Note that the event is only for attendees ages 21 and older. On the other hand, if you have little ones, head to the Brookfield Zoo to see the longest-running lights show in the city. Also, kids can make crafts, play games, listen to music, and much more, all before 8 pm. 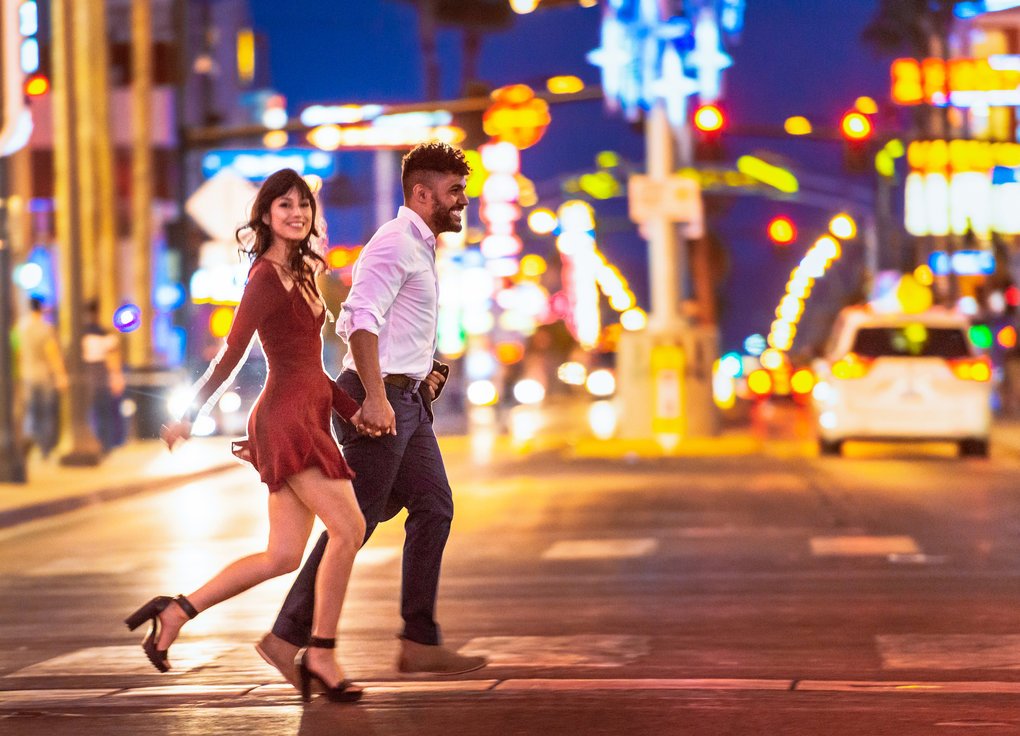 Choreographed fireworks, inclusive gambling hotels, world-class food, critically acclaimed shows, and much more await guests traveling to Las Vegas during the holidays. Notorious for its party culture, the city shines even brighter and transforms into a more chaotic scene for revelers on New Year’s Eve. Thousands descend on this infamous desert city as casinos launch choreographed fireworks as the clock strikes midnight. Further, nightclubs and theaters become packed with residents and celebrities dressed to the nines. One of the best US cities for New Year’s Eve, Las Vegas promises a good time.

For a truly unique experience, head to the top of the Stratosphere Tower. Take in awe-inspiring 360-degree views of the city skyline while watching the Grucci fireworks display. In addition, the STRAT offers two NYE parties from above the Strip so you can celebrate the New Year with flare.

On the hunt for the best parties and events? Some of the top things to do include:

Los Angeles boasts multiple options for those celebrating New Year’s Eve in this SoCal city. Whether you wish to dance downtown at a chic nightclub, party on a yacht, or visit one of the several theme parks hosting fireworks displays, you’re sure to have a great time.

Classic rides, delicious snacks, and fireworks! Any kid and kid-at-heart would feel thrilled.

Of course, there is so much more to do in Los Angeles on New Year’s Eve, as many attractions throughout the city are open during the holidays. For instance, families can head to popular sites during the day such as Aquarium of the Pacific, the Hollywood Wax Museum, and Six Flags Magic Mountain.

The Mid-Atlantic region celebrates New Year’s Eve on a grand scale from Alexandria, VA to Baltimore, MD. However, you don’t have to travel outside of Washington D.C. to see grand fireworks! In fact, you can see a marvelous fireworks display over the Potomac River from the Gaylord National Resort during the Big Night D.C. party. With five dance floors, fifteen themed party areas, live bands, DJs, drinks, and food, guests are set for the evening at fireworks launch over the river.

Another fantastic option to see fireworks and the impeccable city skyline is to take a cruise around the Potomac. The Spirit of Washington and the Odyssey offer New Year’s Eve dinner cruises so that you and yours can sail down the river and feel awe-struck by the joyous holiday sights and sounds. Don’t want to take a cruise but still prefer to see fireworks over the river? The Georgetown Waterfront area presents an array of fantastic eateries and bars that line the river, offering live music and entertainment as you celebrate the arrival of 2020.

Believe it or not, New Orleans showcases fun things to do for visitors of all ages during the holidays. One of the best US cities for New Year’s Eve, The Big Easy even has its own version of the Times Square Ball Drop! Shaped like a fleur-de-lis, the drop occurs in iconic Jackson Square each year during the Dick Clark Rockin’ New Year’s Eve production. Admission to the square is free, but you’ll want to show up early to receive good spots. Further, the event features live broadcasting, entertainment, and fireworks over the Mississippi River.

During the day, revelers in New Orleans watch the Allstate Sugar Bowl and following New Year’s Eve Parade. Featuring massive floats, marching bands, trinkets, and overall pageantry, the parade begins at the intersection of Elysian Fields Avenue and Decatur Street in the French Quarter. The parade then proceeds into the Quarter and traverses past the neighborhoods famed historic landmarks. At around 3 pm, the parade passes the WDSU stage at the Allstate Fan Fest and then ends at Canal Street.

It goes without saying that Orlando’s theme parks are fun year-round. However, on New Year’s Eve, the fireworks displays shine even brighter throughout the parks and are worth seeing when visiting the Sunshine State. Disney World’s parks, Universal Studios, LEGOLAND Florida Resort, and SeaWorld Orlando all shoot off magnificent fireworks displays, which you can enjoy after a day of thrills, shows, and delicious seasonal fare.

Searching for more adult-friendly activities? Orlando is one of the best US cities for New Year’s Eve because the city caters to visitors of all ages. We suggest heading Downtown or to International Drive to see the city’s best hot spots while ringing in 2020. Upscale and casual restaurants and clubs line both areas and feature premium entertainment for adults.

Options downtown include establishments such as Independent Bar, Monkey Bar, Sideshow, and Wall Street Cantina. Down International Drive near Universal Studios, guests can head to bars like Howl at the Moon, Cuba Libre, and The Pub. These are only a few of the many options, and you’ll most likely find yourselves bar-hopping. 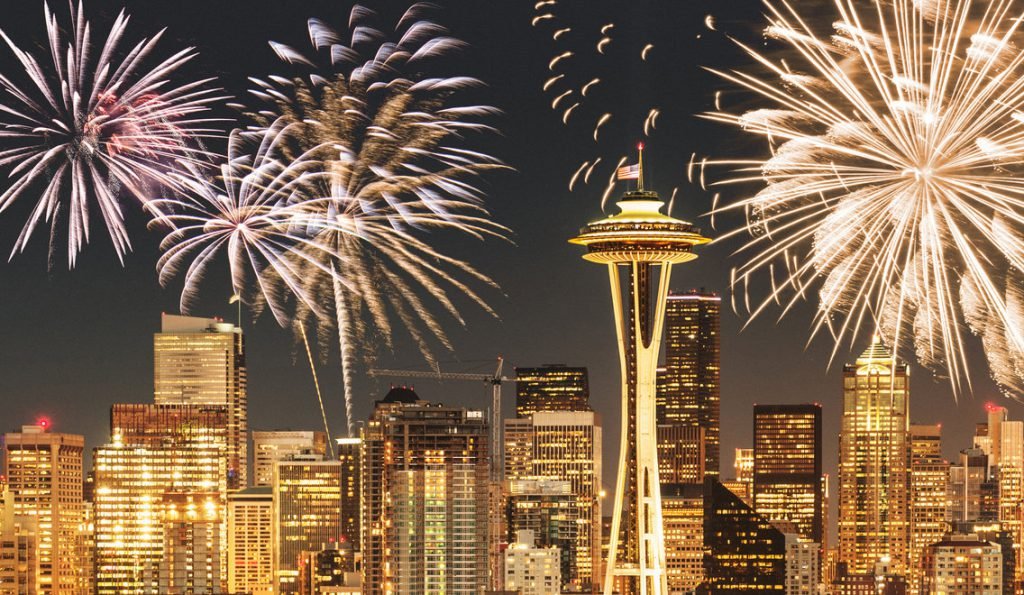 Seattle presents incredible fireworks displays on New Year’s, fun for the entire family. For the best show, we recommend going to the Seattle Center where you can watch a dazzling display of fireworks each year. Furthermore, the Seattle Center hosts numerous parties for guests of all ages

For instance, Armory Stage in the Center will host SWAY, a rock cover band, from 8 pm to midnight. Additionally, the International Fountain showcases live electronic music and a video production show beginning at 10 pm. Note that the fireworks are free to enjoy, but the two parties hosted at the Center require admission fees

Additionally, the Pacific Science Center exhibits fire sculptures, a midnight toast, and live music, and more special entertainment. Interested in pop culture? Visit the Museum of Popular Culture (MoPOP) at the Seattle Center to experience the 15th Annual INDULGENCE New Year’s Eve Bash. Most exhibits will be open during the event, which begins at 8:30 pm.  Guests can expect live entertainment, VIP areas, over 20 bars, three performing stages, and more.

Now that you know the best US cities for New Year’s Eve, where will you head to this year? Let us know!