New Year's Eve Branson MO: Things to Do and Where to Celebrate

Looking for a great way to ring in the new year in the Ozarks? Time to toss some confetti and let the countdown begin!

Whether you spend your Branson New Year's Eve 2022 near the lake, on the lake, or on the town, you can’t go wrong!

The city’s events and shows on New Year's Eve celebrate with special performances, while hotels host dance parties and exceptional dinners. Fan-favorite attractions offer special hours on the holiday, too.

Take a look at all the things to do in Branson, MO, for New Year’s Eve. Tip your party hat to a good time and an even better new year!

Keep reading for a list of the best ways to spend a Branson New Year's Eve.

Where to Stay on New Year’s Eve in Branson

Make a night of your New Year’s Eve celebration at the Chateau on the Lake. The sparkling evening at this luxurious hotel will be filled with entertainment, delicious food, and more!

To go all out, we recommend the Chef’s Table experience -- a seven-course gourmet meal you’ll be talking about for years to come.

End the night with a fireworks show to usher in the new year on the right foot. Hotel packages are available and include a late check-out so you can party into all hours of the night without a care in the world.

Pro Tip: If you’re going to be in the area but not spending the night, you can catch a glimpse of the fireworks show from the Table Rock Lake Dam! 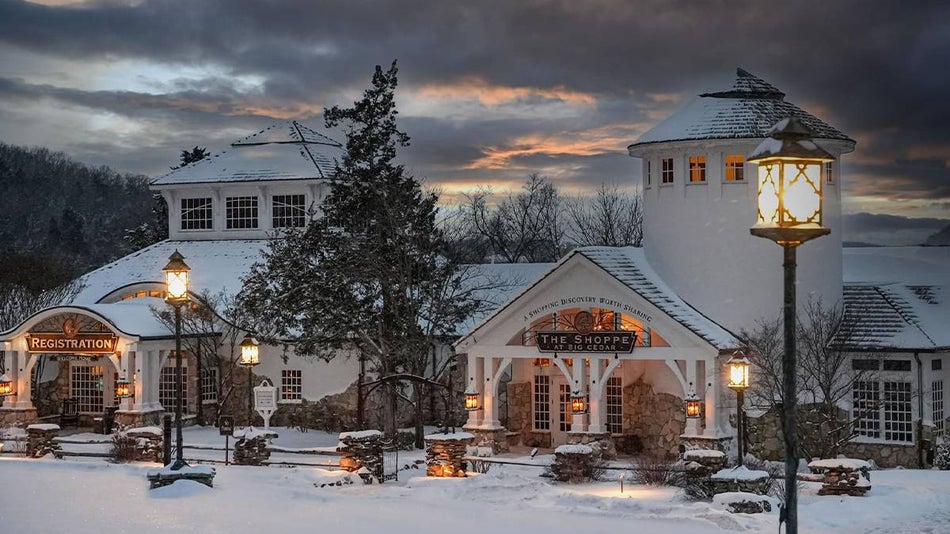 Celebrate New Year’s Eve in the lap of Ozarks luxury at Big Cedar Lodge. Resort guests can mosey over to the Grandview Conference Center for a New Year’s Eve party like no other.

Related Post: The Most Festive Things to Do in Branson During Christmas

Munch on hors d’oeuvres and desserts while you move and groove to live music. A midnight champagne toast tops it all off. During your stay, take advantage of the beauty of the Ozarks wilderness with activities like fishing, golfing, or hiking. 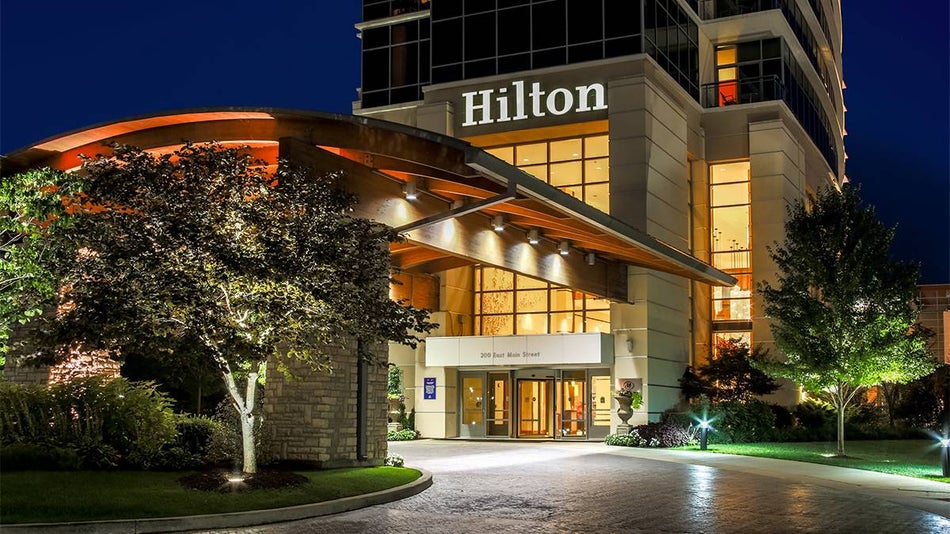 Satisfy your midnight munchies at the buffet, then toast to the new year. The event also features a live DJ! The party starts at 9 p.m. and wraps up around 1 a.m.

Tickets are limited, so get yours today! 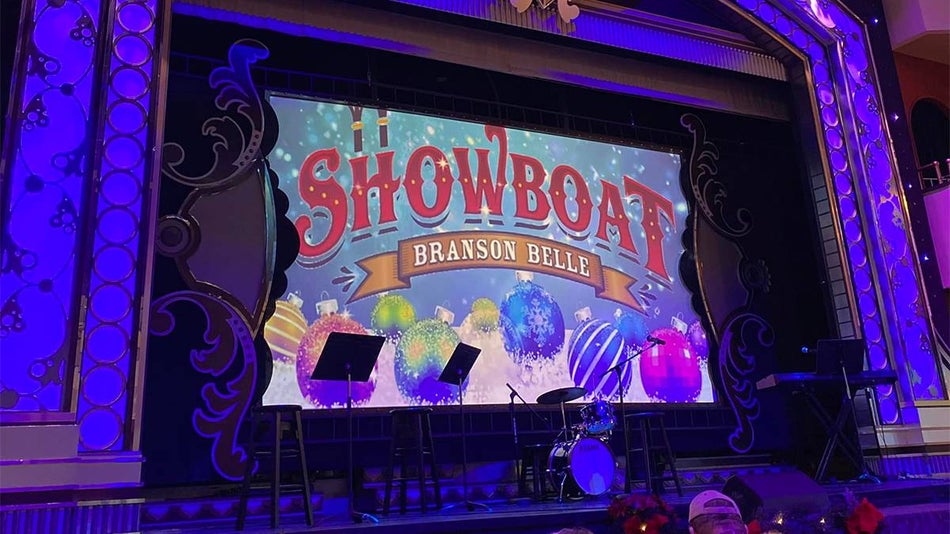 The Best Branson Shows to Catch on New Year’s Eve

Wave hello to the new year on the waves of Table Rock Lake! Enjoy a delicious three-course meal aboard the Showboat Branson Belle. The night's entertainment is a family-friendly musical variety show that will have you humming all the way home.

Afterward, celebrate with dancing and sparkling grape juice. Catch sight of the surrounding fireworks in Branson with the lake as a stunning backdrop to ring in the new year. The cruise is perfect for the whole family!

Pro Tip: Bundle your tickets with a hotel or surrounding attractions to save money and make it a full trip. 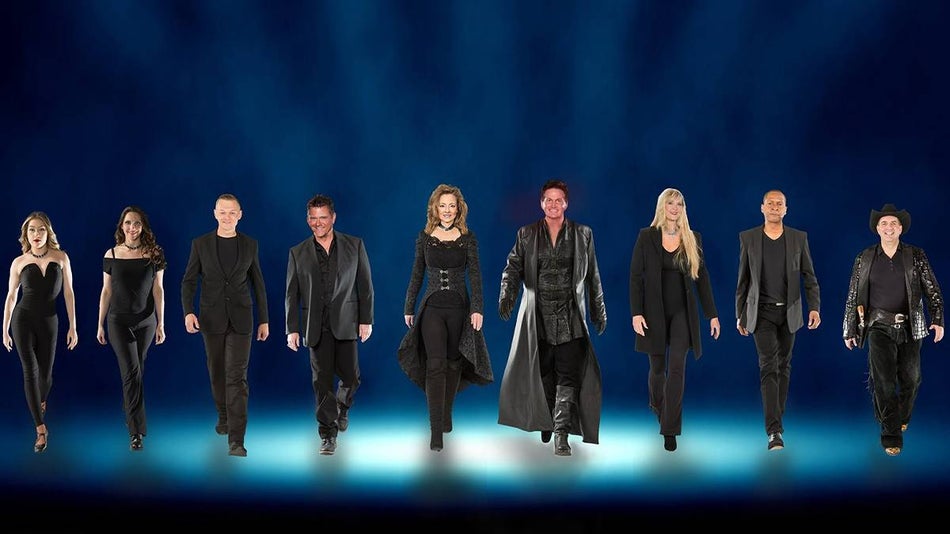 Ooh and ah at illusions that mix mystery and wonder when you spend New Year’s Eve at Hamners’ New Year’s Eve Fiesta Party. The show will feature more than just magic, too!

Magicians Dave and Denise Hamner join other first-class acts for comedy, singing, and dancing so you can experience the best of all worlds.

A delicious Mexican-style dinner adds to the festive theme. This family-friendly event features fun contests, party favors, and a magical laser show countdown to the new year. The show begins at 7:30 p.m. Did we hear you say, “Olé!”? 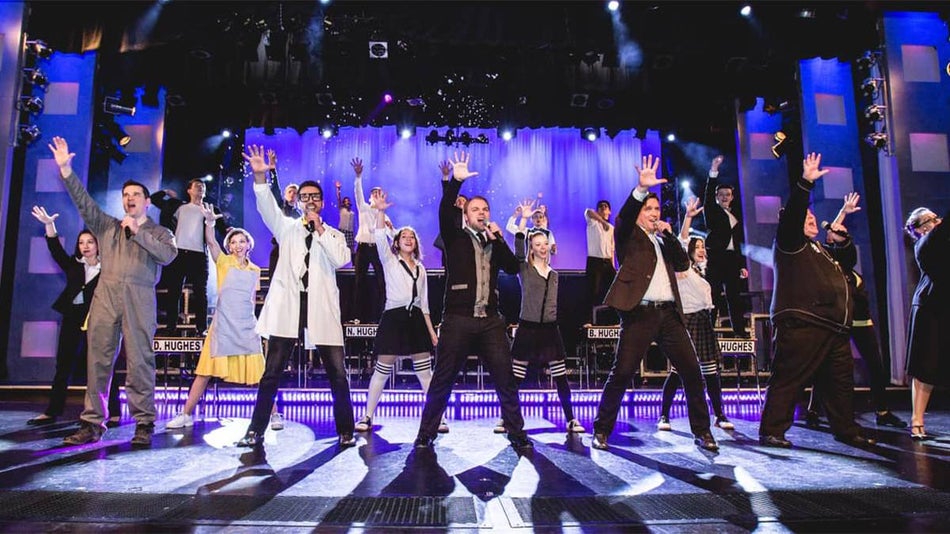 Related Post: The Best Things to Do in Branson with Toddlers

The night is a mash-up of all five shows performed at the theatre, such as ReVibe, Oh Happy Day, and the Hughes Brothers Christmas Show.

Tasty snacks, party favors, games, and prizes are all part of the festivities at this special New Year’s Eve production. You may not be at Times Square for the ball drop, but the show boasts a huge balloon drop that’s just as good, if not better! 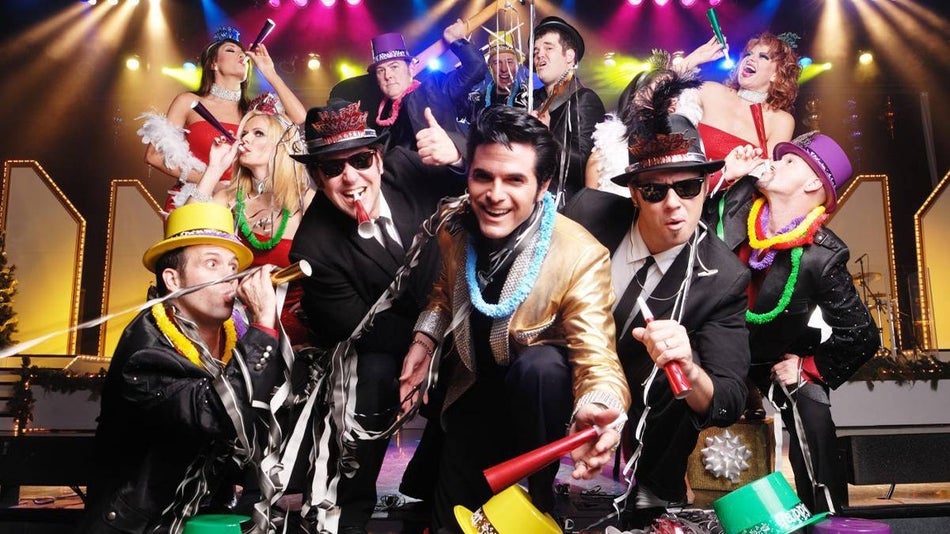 This year’s line-up for the Branson New Year's Eve event includes performances from Elvis, The Blues Brothers™, and more. As a special treat, vocal group SIX will join the party. Jam out to all your favorites as you celebrate a fresh start in 2022! Snag your tickets for the 9:30 p.m. show today.

Laugh and sing the night away at this special New Year's Eve show. The production features a multitude of legendary performers, special guests, and comedy bits.

Related Post: 6 Unexpected Things to Do in Branson at Night

In addition, the three-hour show includes giveaways, auctions, party favors, and a live countdown with a giant balloon drop. Feast on a catered, mouth-watering BBQ meal which will be served starting at 7:30 p.m. Afterwards, hang onto the edge of your seat for the start of the show at 9 p.m. 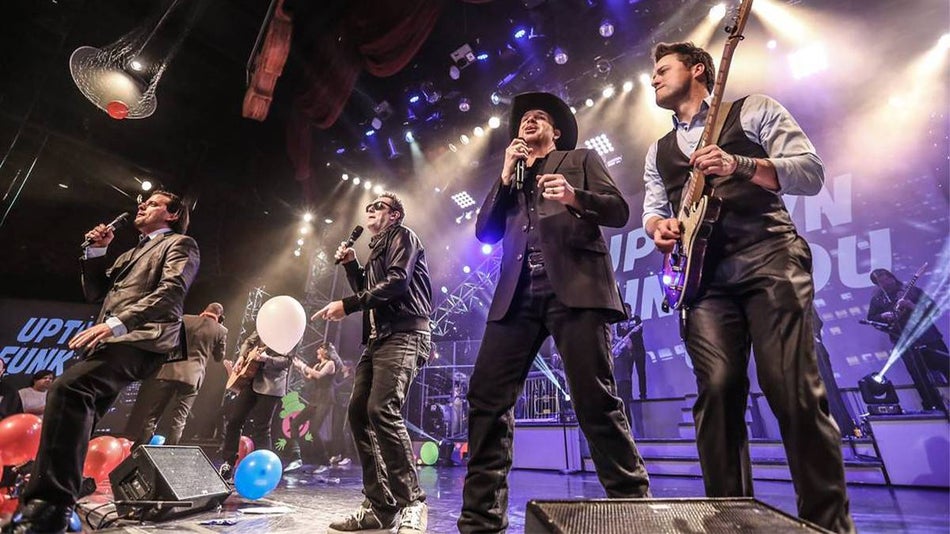 Snack on hors d’oeuvres and grab a party favor, included with your ticket. The musical celebration leads up to an enormous balloon drop at the stroke of midnight! This year, the fun starts at 7 p.m.

A grand time awaits at the Grand Jubilee Show on New Year's Eve! A swirl of talented singers and comedians light up the night before the turn of the year.

Additionally, party favors and snacks add to the fun at this special holiday event! 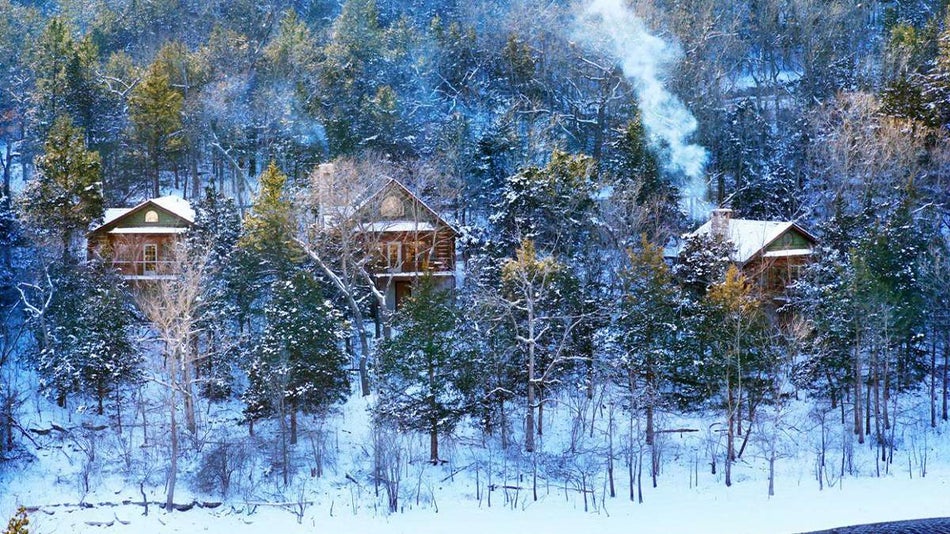 Don’t forget about the kiddos this New Year’s Eve! There’s a special event just for them taking place this year.

Head to the Wonderland New Year’s Eve party at Big Cedar Lodge for activities like laser tag, bowling, and face painting. Yummy food and balloon animals are just a few of the tricks up the hosts’ sleeves! It’ll be the ultimate kids’ palooza. 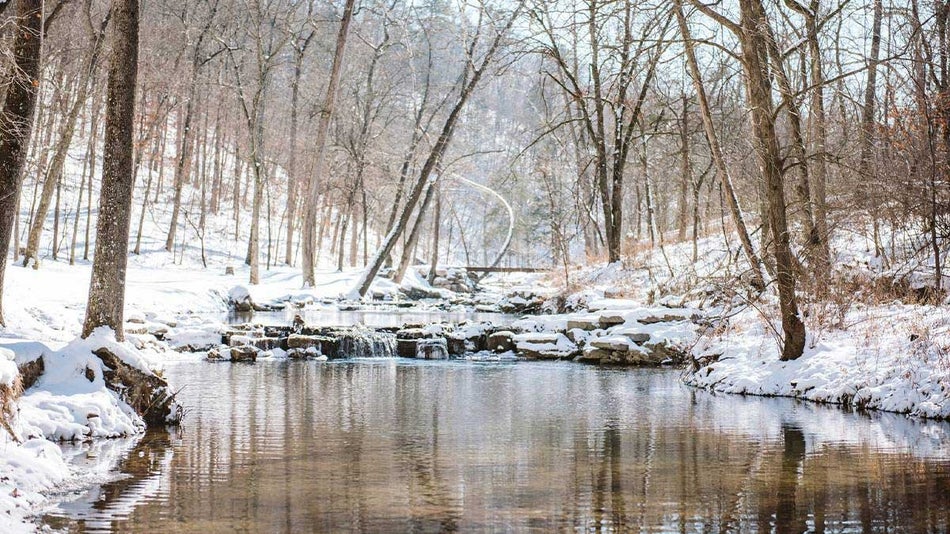 Before you head to your New Year’s Eve party of choice, squeeze one last hike into the year. Meander along the 6.5 miles of paved trails at Dogwood Canyon, filled with striking nature views at every turn. It’ll be open from 9 a.m. to 5 p.m. on New Year’s Eve, so get your tickets today!

Branson, Missouri, winter is usually frigid. So, be sure to pack a warm coat for this one! If you're lucky, you may get to experience a sparkling Branson snow while you're in town.

Pro Tip: Check out our Dogwood Canyon ticket bundles to pair your tickets with one of the New Year’s Eve shows listed above and save some dough!

Hop aboard the Titanic for an adventure at sea before you head to a New Year’s Eve show or party. There’s plenty to see, from interactive exhibits to fascinating displays.

17 Absolutely Free Things to Do

You heard right -- free! Make a New Year’s resolution to go easy on the budget this year. We’ve rounded up 17 free things to do in Branson on our handy Travel Guide! 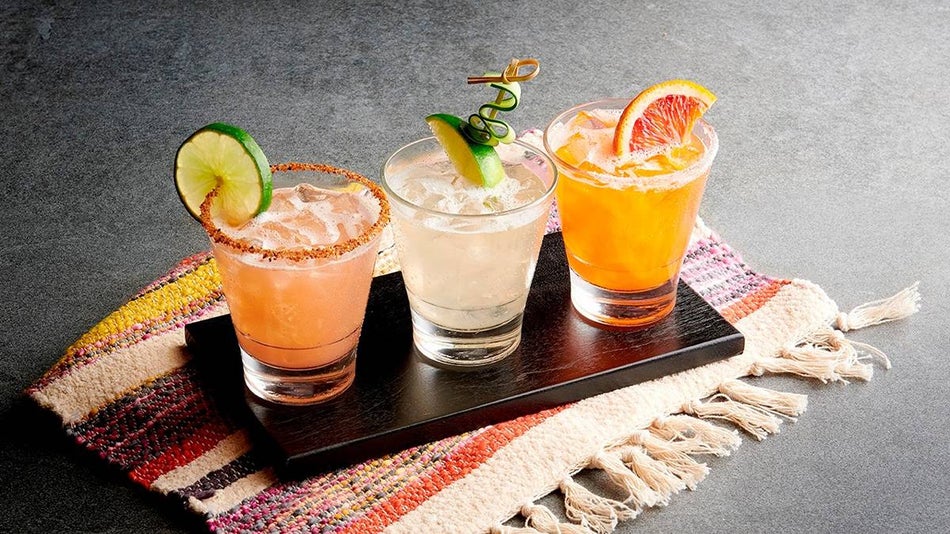 On New Year’s Eve in Branson, plenty of restaurants are open to suit every taste and satisfy every appetite. We suggest calling the day of to double-check the hours in case of changes.

Are You Ready to Ring in the New Year in Branson New Year's Eve?

While you’re planning your trip, don’t forget to bundle up! No, we’re not talking about coats, although you might need one for chilly winter weather in the Ozarks. Pair tickets to shows and attractions with your hotel room to save big!

Related Post: 17 Absolutely Free Things To Do in Branson, Missouri

Kick off the new year in the charming city of Branson! It’s a tourist haven filled with exciting events and activities galore. The trouble will be narrowing down exactly where you want to ring it in. Cheers to 2022!

How Do You Plan to Celebrate New Year's Eve in Branson This Year?

Tell us in the comments!