The Brooklyn Bridge, one of the city's most recognizable and legendary symbols, connects two great NYC boroughs, Manhattan and Brooklyn. You can walk it, drive it or bike it - but whatever you do, don't miss it!

Visiting this celebrated National Historic Landmark is one of the city's top tourist attractions, and not just during the day. Walking the bridge at night is one of the most exciting things to do in NYC. It's fairly busy until 11:00 p.m. with commuters, tourists and general night owls.

The pedestrian walkway across the bridge is slightly over 1.1 miles and takes the average site-seeker about 60 minutes to cross, but only about 25 minutes for the typical New Yorker commuting to work. It's free to walk or drive across the bridge.

Photo Alert: The breathtaking skyline and picturesque river views from the Brooklyn Bridge are endless! 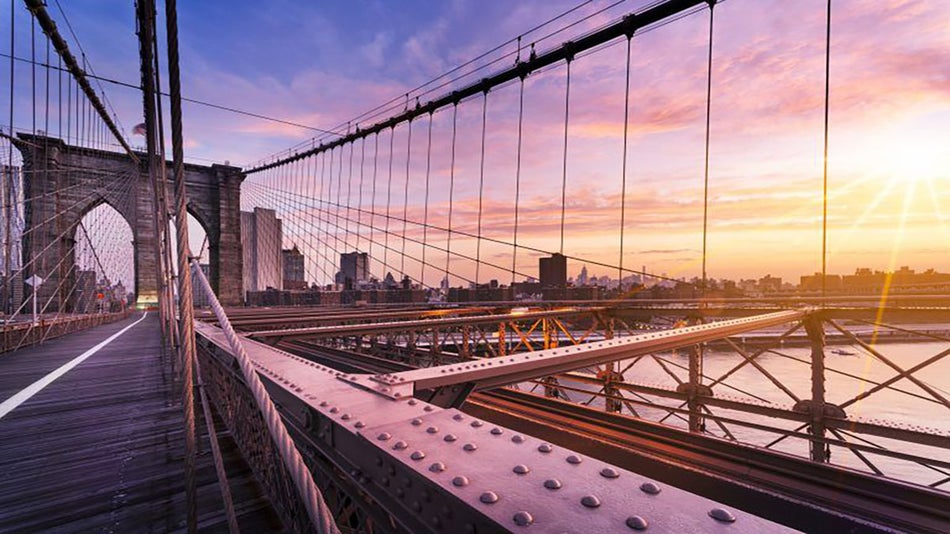 DUMBO (Down Under the Manhattan Bridge Overpass) is located between the Manhattan Bridge and the Brooklyn Bridge and is considered one of NYC's premier art districts. After crossing the Brooklyn Bridge, visitors often check out this trendy waterfront neighborhood lined with cobblestone streets, chic boutiques, coffee shops, art galleries, bookstores, pubs, cafes and restaurants. Some of the more popular hang-outs include:

In the 1970s, many artists came to the neighborhood seeking inexpensive studio space and apartments. The DUMBO name tried to deter developers in the area. Unfortunately, the secret leaked, and it soon grew into the upscale residential and commercial community it is today.

Pro Tip: Parking is limited, but there are some metered spots in a public lot on Furman Street near Pier 2 and paid parking lots near Pier 1 and Pier 6.

The Brooklyn Bridge Park has many activities for families and outdoor enthusiasts, along with its stunning Manhattan views. Kids can ride the vintage Jane's Carousel or explore the many park playgrounds. Adults can check out DUMBO's dining and pubs before heading to St. Ann's Warehouse for plays, concerts and groundbreaking musical theater. There's kayaking alongside the river's sandy beaches and Cliff's Outdoor Climbing Gym (the largest in North America). History buffs might like to poke their head in the oldest boxing gym in New York. Gleason's Gym was a training ground for legends like Muhammad Ali and Mike Tyson.

City planners saw the need for a bridge in the early 1800s, though the main challenge for engineers was the East River below. The bridge needed to be high enough to pass over the multitude of ships and boats that passed beneath. Construction began in 1869 and ended in 1883.

German architect John A. Roebling designed the famed suspension bridge that spans the East River and was the first to use steel for cable wire and explosives. The bridge, which opened on May 24, 1883, was the largest and longest steel suspension bridge globally, spanning 1,595 feet. The building project took over 13 years and was considered the most outstanding engineering feat of the 19th-century.

Today the Brooklyn Bridge is one of four bridges connecting Manhattan to Long Island (the two boroughs of Brooklyn and Queens). Engineers constructed two 268-foot-tall towers with Gothic arches high enough above the river traffic. The bridge has been designated a National Historic Landmark, a New York City Landmark, and a National Historic Civil Engineering Landmark.

Fun Fact: Designers built the bridge with numerous passageways and compartments, including wine cellars and a Cold War-era bomb shelter. The nuclear bunker is near the bridge's main entrance on the Manhattan side.

Head designer Roebling never got to see the completion of the bridge due to a construction accident where he died of a tetanus wound. At least 20 more people died during construction. Some fell from the towers, others were hit by falling debris, but several succumbed to the caisson disease known as the bends. Roebling's son Washington became bedridden from this sickness. He turned over supervision to his wife, Emily. For the next 11 years, she managed the bridging construction, upon whom many believed she was the actual designer.

The bridge opened with a large celebration which included several fired cannons and an hour-long fireworks display. When the bridge opened, more than 150,000 people walked across. Tragedy struck a week later when panic erupted over a rumor the bridge was collapsing. The chaos led to a trampling where 12 people died.

Fun Fact: In 1884, to test the bridge's strength and endurance, P.T. Barnum walked his troupe of 21 elephants, seven camels and ten dromedaries across the bridge.

Fun Fact: The Brooklyn Bridge has cameoed in numerous TV shows and films like Moonstruck, Godzilla and Spider-Man.

The bridge also attracts daredevils searching for their 15 minutes. Some thrill-seekers have climbed the twin towers, and bungee jumped, while others flew planes under the bridge. The first man to jump from the bridge died, but several other jumpers have tried and survived.

Transportation to the Brooklyn Bridge Park

Subway: There are a few train options: A/C Trains to High Street, F Train to York Street, R Train to Court Street, and the 4/5 Trains to Borough Hall.

Jet off on a sightseeing cruise in NYC this summer

Ferry: The NYC Ferry and the Governor's Island Ferry both sail directly to the Brooklyn Bridge Park. Ferry tickets are $2.75 and can be purchased on the NYC Ferry app or through a vending machine at one of the landings.

New York's iconic Brooklyn Bridge, one of the world's oldest and most famous bridges offers…