Experience the gastronomical wonders of Los Angeles! With a population density in millions and having a diverse heritage, it’s not surprising that the City of Angels is also known for being a melting pot of cultures and cuisines. Guests on this tour will indulge as they walk, eat and learn about what it feels like to live locally in LA!

from Ashley, one of our Los Angeles Travel Experts
Read More

from Private Foodie Tour of Downtown LA
To know the food of LA, one has to know the history as well. Your tour is food, history, culture, and heritage all wrapped into one experience. On your private walking food tour of downtown LA, you will:

-Begin your tour at Union Station - Opened in 1939, it is the largest and busiest station in the Western United States.
-Visit Olvera Street Market - which is part of the area known as El Pueblo Historic Monument, the birthplace of Los Angeles.
-Enjoy your first taste of Angeleno food at Cielito Lindo, with mouth-watering, fresh taquitos and guacamole.
-Fulfill your sweet tooth with a snack from Mr. Churro. For the adventurous foodie, try one of the Mexican churros filled with creams in a variety of flavors.
-Visit Grand Park and learn about the way the city has honored several of its public servants while enriching downtown with green spaces.
-Hop aboard a quick ride on the world’s smallest railway.
-Finish your tour at Grand Central Market, where you will have options on your final food tasting, based on your guide’s recommendations on what’s available that day.

Beginning your tour at the cross-section of LA’s transport - which is trafficked by more than 100,000 visitors and commuters each day - is the perfect way to delve into a city that has been described as “500 miles wide and 1 mile deep.” Explore the many streets shops and street vendors selling handcraft goods, Mexican folk art, and souvenirs, along with LA’s oldest existing house built in 1818. As you eat and wander, your guide will tell you the story of the city and its’ many layers.

See the Walt Disney Concert Hall, standing in stark contrast to the early architecture of the city. Your ride aboard a narrow-gauge funicular offers a short, fun way to venture from Grand Avenue to Hill Street. Your tour will finish with one more indulgent food option at Grand Central Market, where your guide will help orient you while pointing out the best local hotspots inside. You’re encouraged to stay in the market after your tour ends, where you can indulge in a cocktail or beer with locals to truly immerse yourself in the LA tradition. 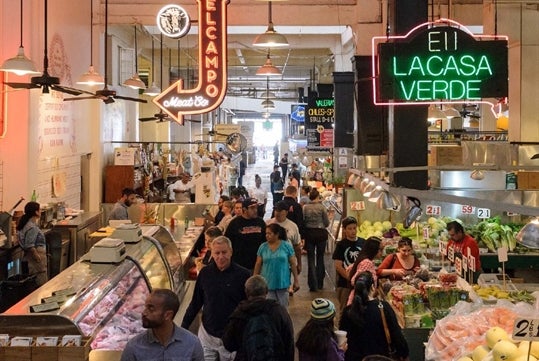 Have you been to Private Foodie Tour of Downtown LA? Share your knowledge and be the first to review this.
Write a Review
Back to Top

Private Foodie Tour of Downtown LA is located at Travel Curious • In front of the "Homebound Brew Haus", located to the right of the main entrance of Union Station • Los Angeles, CA 90012