NYC 4th of July: How to Celebrate Independence Day

Boat parties, BBQ, and fireworks extravaganzas above the Hudson River. The Big Apple spares no expense when it comes time to celebrate the 4th.

Follow along as we dive into every 4th of July celebration in NYC.

From the unforgettable pyrotechnics of the Macy's 4th of July Fireworks to sun-soaked days spent riding the Cyclone at Coney Island, New York City brings star-spangled passion to the fourth.

Cheers to the red, white, and blue on a rooftop bar, or honor the American flag with a riveting trip to Ellis Island.

Read on to discover the best 4th of July Events in NYC.

This year the Fourth of July falls on a Monday. So make the most of your time in the Empire City by planning a fun-filled holiday weekend.

Revel in the awe-inspiring views afforded by the Empire State Building, pay your respects at the 9/11 memorial, or step back in time at the Statue of Liberty. From museums to landmarks to musicals, there's never enough time in the City That Never Sleeps:

No trip to New York is complete without stopping at the city's most iconic building. A 20th Century symbol of innovation, technological prowess, and economic strength, the Empire State Building Experience is not to be missed. Savor panoramic vistas of Manhattan, Central Park, and Brooklyn from the city's only 360-degree outdoor Observatory and new 102nd Floor Observatory.

Remember the lives, sacrifices, and stories of the victims of the September 11th terrorist attacks at the 9/11 Memorial and Museum. This immersive experience tells the story of the nearly 3,000 thousand people who lost their lives on that fateful day through interactive exhibits, films, and artifacts.

Dive into the history of NYC's most renowned monuments with a captivating Secrets of the Statue of Liberty Tour & Ellis Island tour. Uncover immigrant journeys, salivate over cityscape views, and appreciate unfettered access to Lady Liberty herself. Have your camera handy, as you'll want to document every moment of magical NYC history. Your four-hour tour includes stops at the Statue of Liberty, Ellis Island, and Liberty Island.

New York City visitors angling for the Nation's most spectacular display of patriotism are in luck. Macy's annual party in the sky is a world-revered celebration of Uncle Sam and features over 65,000 shells launched from various barges on the East River. This fireworks spectacular is the country's largest Independence Day celebration and lasts around 25 minutes.

Related Post: NYC Tourist Traps: What to Avoid in the Big Apple

Enjoy dozens of colorful explosions and dramatic effects as you witness these sparklers soar thousands of feet in the air. Can't make it in person? Revel in all the star-spangled fun and music performances via NBC's live broadcast.

Exact locations for the launch have yet to be announced, but based on past years' festivities, optimal views of the Macy's display can be found via a fireworks cruise, the East River State Park, or an NYC rooftop bar. 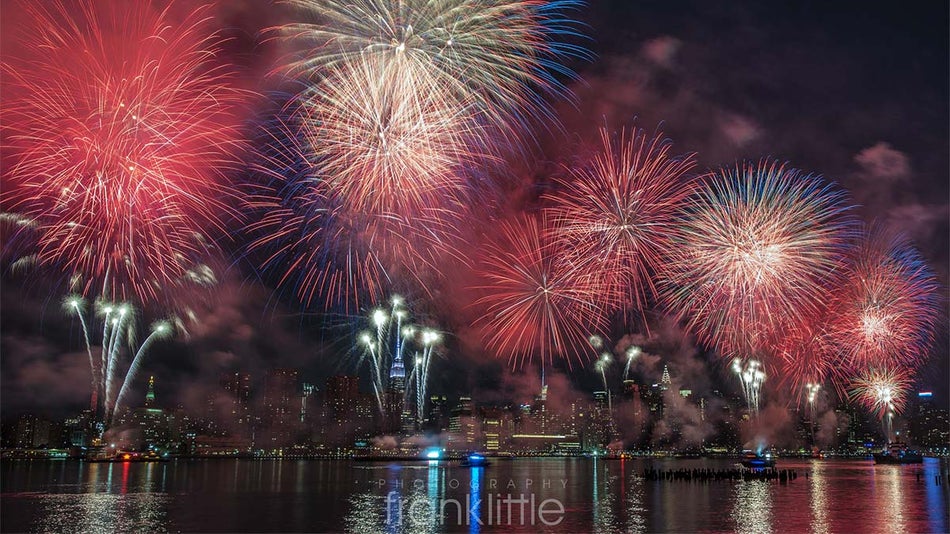 Load up on SPF and spend a day hanging out on NYC's most famous boardwalk and beach when you make the trek to Coney Island. Inhale that saltwater scent, snack on funnel cakes, or get soaking wet on the Wild River ride.

This free and public event is held at the Riegelmann Boardwalk on Coney Island Beach in Brooklyn. Snag a spot directly on the boardwalk or beach for an extraordinary view of the fireworks show. 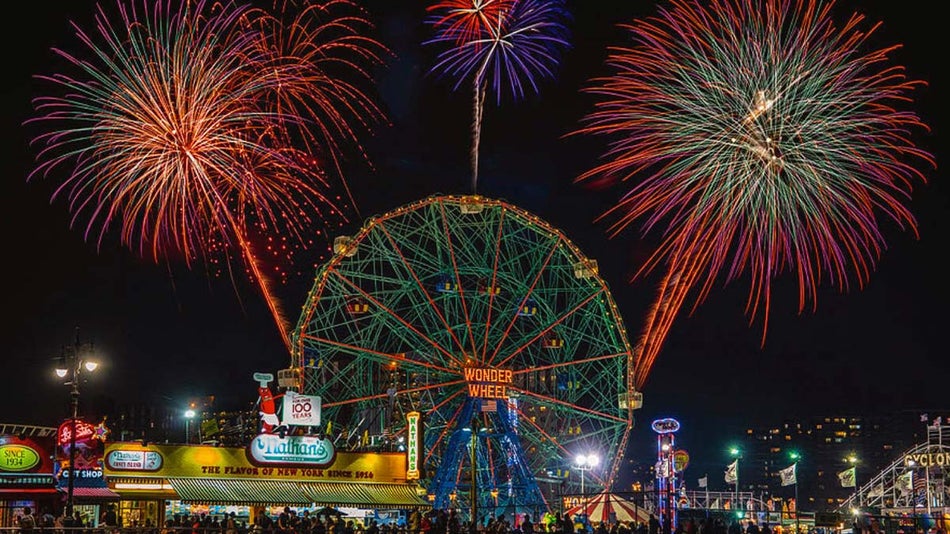 Not feeling another stomach-churning ride aboard the Thunderbolt? Then, give your nerves a rest when you opt to witness the dog-eat-dog world of competitive eating. As endemic to Coney Island as the Mermaid Parade, Nathan's Hot Dog Eating Contest is a classic 4th of July NYC event.

Every year at noon, the world's greatest competitive eaters congregate to see just how many hot dogs they can down in 10 minutes.* An arresting sight, the current competitive world record is 76 hot dogs in 10 minutes. After this mystery meat-binging experience, head to the beach for some R&R before the free fireworks show at 10 p.m.

*Please note that the official contest length has varied over the years.

The Empire City's 4th of July festivities get a lot of fanfare. However, there is plenty to do in the Garden State too. Hightail it just across the river via the convenient PATH train for oodles of star-spangled excitement in New Jersey.

The Fireworks and Food Festival in Jersey City is a free public event that features mouthwatering bites, artisanal shopping, live music, and more. Spend the day snacking on twisted taters, sipping ice-cold lemonade, and marveling at the Manhattan views. At 9:30 p.m., the food service will wind down, and the electrifying display of fireworks will begin. 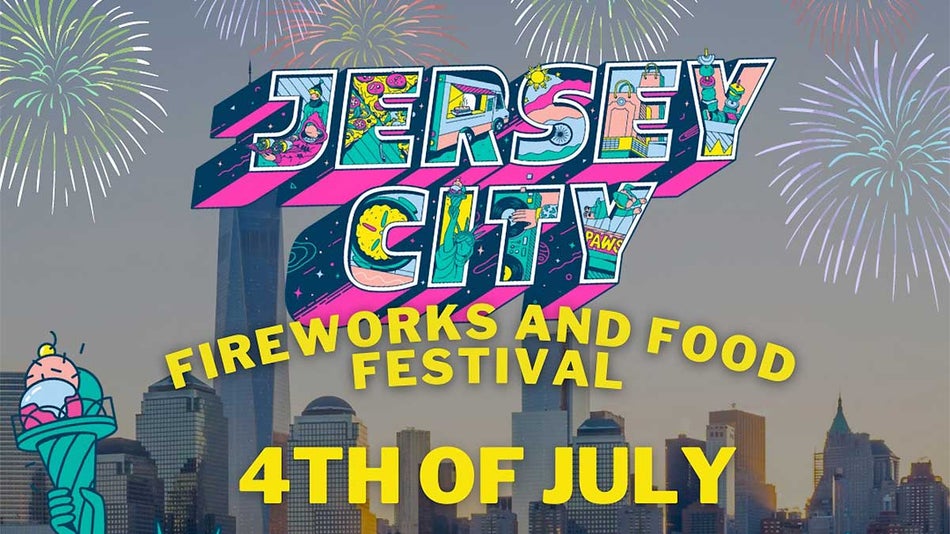 Light your soul aglow with liberty spirit when you witness the pomp and circumstance of a real 4th of July Parade in Staten Island. For over a hundred years, participants have marched down Victory Boulevard from Cannon Avenue to Glen Street to honor our Nation's birth.

Uncle Sam stilt walkers, flag-decorated cars, and plenty of patriotic passion will be on display for the annual Travis 4th of July Parade. Before the parade's step-off at 12:30 p.m., there will be a moving noon opening ceremony at Independence Park. Then, the parade will pass through its triangular-shaped parade route from Showplace Center. 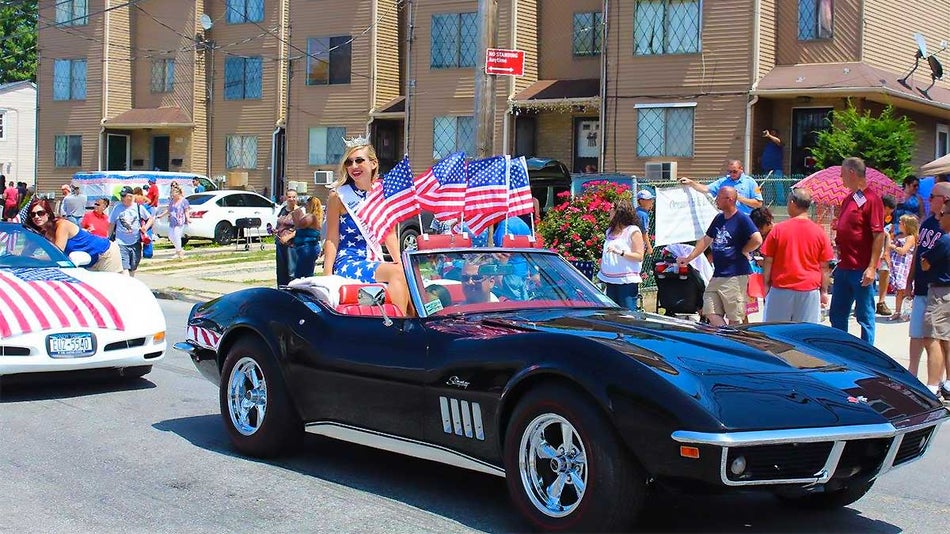 Windswept unobstructed views, mouthwatering buffets, and live music performances make firework cruises a sure-fire hit every 4th of July. Ditch the crowded streets and gaze in wonder at Macy's magnificent display, a glass of champagne in hand, when you book any of the following Big Apple Cruises:

Set sail with one of the most trusted names in sightseeing when celebrating Uncle Sam with Circle Line. Circle Line's 4th of July Cruise is a 4.5-hour adventure down the sparkling Hudson River. Then, journey around the tip of Manhattan and catch spellbinding sights of the Empire State Building, the Brooklyn Bridge, One World Trade Center, and the Statue of Liberty.

Related Post: 5 of the Oldest Bars in New York City

Raise a glass to the red, white, and blue as you enjoy an open bar of unlimited beer, wine, and soda.* Come hungry as you'll want to eat your fill of charbroiled burgers, hot dogs, creamy mac and cheese, and cranberry slaw.

Looking for a quick rundown of NYC Landmarks before you embark on your evening's activities? The Lady Liberty Cruise will be running 1-hour sightseeing tours all day on July 4th. First, settle in for stunning cityscape views, expert narration, and plenty of Big Apple history. Then, speed through Manhattan's waters as you witness renowned landmarks such as the Freedom Tower, the Empire State Building, the Statue of Liberty, the Brooklyn Bridge, the Manhattan Bridge, and Governor's Island. 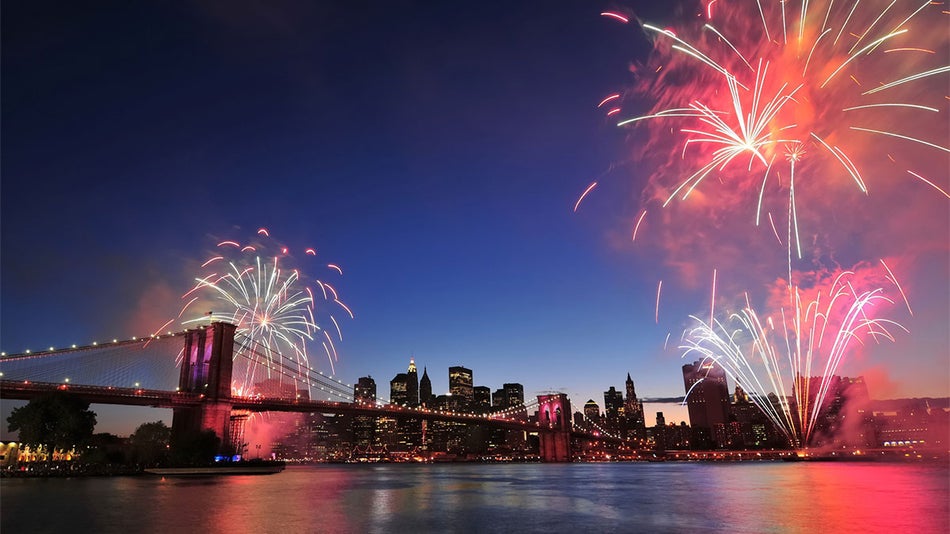 Ditch those cut-offs and flag-themed crop tops for a night of elegance and excitement. The Bateaux New York 4th of July Premier Plus Dinner Cruise is a five-star luxury event that promises unparalleled views, creative cocktails, and a chef-prepared meal. Don your semi-formal attire and prime yourself for 5 hours of upscale and elegant cruising on the Hudson River. First, revel in the melodious tunes of the acoustic quartet. Then, indulge in a top-shelf open bar. Finally, be left breathless by your world-class view of the Macy's fireworks.

Feast on a three-course plated dinner menu with highlights such as seafood chowder, braised beef short ribs, and NY-style cheesecake. Inspired by European design, the Bateaux glass-enclosed deck provides the ultimate locale from which to usher in Independence Day.

Every July, the glittering lights of Broadway and the museums filled with modern art masterpieces are put on pause. Meanwhile, visitors and residents of Manhattan turn their attention to Uncle Sam.

The Big Apple is just bursting with All-American excitement! From the world's most famous fireworks display to a competitive eating contest in Coney Island. Souvenir shop and sample deep-fried treats in Jersey City. Or, board a Circle Line Cruise for an up-close encounter with Lady Liberty.

However you declare your Independence this year, New York City's events, attractions, and cruises guarantee boatloads of stars and stripes-themed fun.

Tell us, What's Your Favorite Way to spend the 4th of July in New York City?