Fast walking, fast-talking brokers line New York City’s Financial District between Broadway in the west and the East River in the east. Here’s the bear and bull of this infamous corridor.

The term “Wall Street” is a metonym or figure of speech in the financial world, especially for the financial markets of the United States.

The Wall Street area is home to the world’s leading stock exchanges as well as the Federal Reserve Bank of New York. It also contains many commercial banks, insurance companies, and other institutions, including the New York Mercantile Exchange. The NYSE’s purpose is to provide a central marketplace for investors to buy and sell stock.

Fun Fact: Directors like Martin Scorsese and Oliver Stone seem fascinated with Wall Street, and so do audiences. The 1987 film Wall Street made “Greed is Good,” a catchphrase in the 80s.

Wall Street got its name from the wooden Dutch wall colonists built to defend themselves from the British and Native Americans. In the early 17th century, an actual wall existed on the street from 1685 to 1699. The area later served as a slave-trading marketplace and securities trading site due to its proximity to New York’s ports.

Next, in the 19th century, more businesses and residences moved in, though it was still mainly a financial district for New York City’s financial industry. The neighborhood also contained New York’s first Federal Hall.

In the late 1700s, Security traders who met faithfully under a Buttonwood tree on Wall Street formed an alliance called the Buttonwood Agreement. The leaders designed the pact to keep out government intervention and outsiders. Anyone who wasn’t a member and wanted to buy stock had to do so through an approved broker. The Buttonwood traders soon called their inner workings the New York Stock and Exchange Board. To gain a spot on the board, one had to be voted in and willing to pay the $25 fee, which rose to $100 by 1837.

Fun Fact: The early exchange had a strict dress code with men in top hats and dress coats.

Consequently, women had a much harder time breaking through the boys’ club. It wasn't until the 1940s, that the board allowed women to be on the trading floor. In fact, Muriel Siebert became the first woman to own a seat on the NYSE in 1967.

The outbreak of World War 1 forced the NYSE to shut its doors in July 1914, when many foreign investors sold their holdings to raise money for the war efforts.

The market crash of 1929 sent the financial system reeling. On notorious Black Thursday, October 24, 1929, the market dropped a lethal 11 percent, collapsing the stock markets, which had surged as high as 50 percent the previous year. By October 28 (Black Tuesday), investors panicked as their finances dropped, and the market lost $30 billion. Following the stock market crash, the country slumped into the Great Depression.

Wall Street took another plummet in 1987 when securities trading experienced a single-day crash with a $500 billion loss. Wall Street computers were programmed to sell stocks at specific price thresholds, and a domino effect liquidated thousands of stocks. Most notably, one of the worst financial crashes since the Great Depression was in 2008 with the subprime mortgage crisis.

But the most devastating occurrence to hit the financial district was the September 11, 2001 terror attacks that resulted in 2,996 deaths and the destruction of the World Trade Center's Twin Towers.

Just outside the NYSE sits a hefty bronze sculpture that weighs over 7,000 pounds and stands 11 feet tall. The bull, a symbol of wealth and abundance, represents a thriving economy. Artist Arturo Di Modica gifted and installed his piece in the city after the 1987 stock market crash. Di Modica paid $360,000 of his own money to build the bull to inspire people. 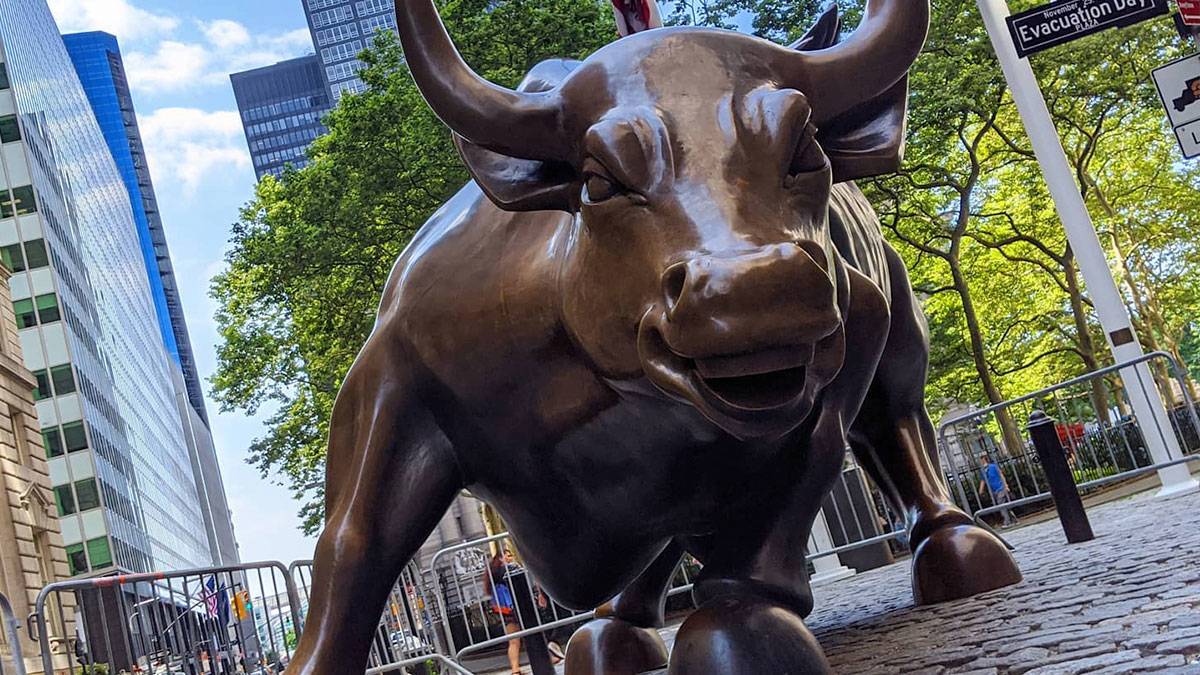 Fun Fact: Rubbing the bull’s bronze testicles has become a superstitious endeavor for tourists hoping to gain some good luck!

Related Post: Snap Iconic NYC Photos You Can Be Proud Of

The bronze Fearless Girl statue by sculpturist Kristen Visbal once faced the charging bull. The symbol of female empowerment once met down the bull until city planners moved it to the front of the NYSE in 2017. It was only meant to stay for seven days, but the public loved it so much it stayed. 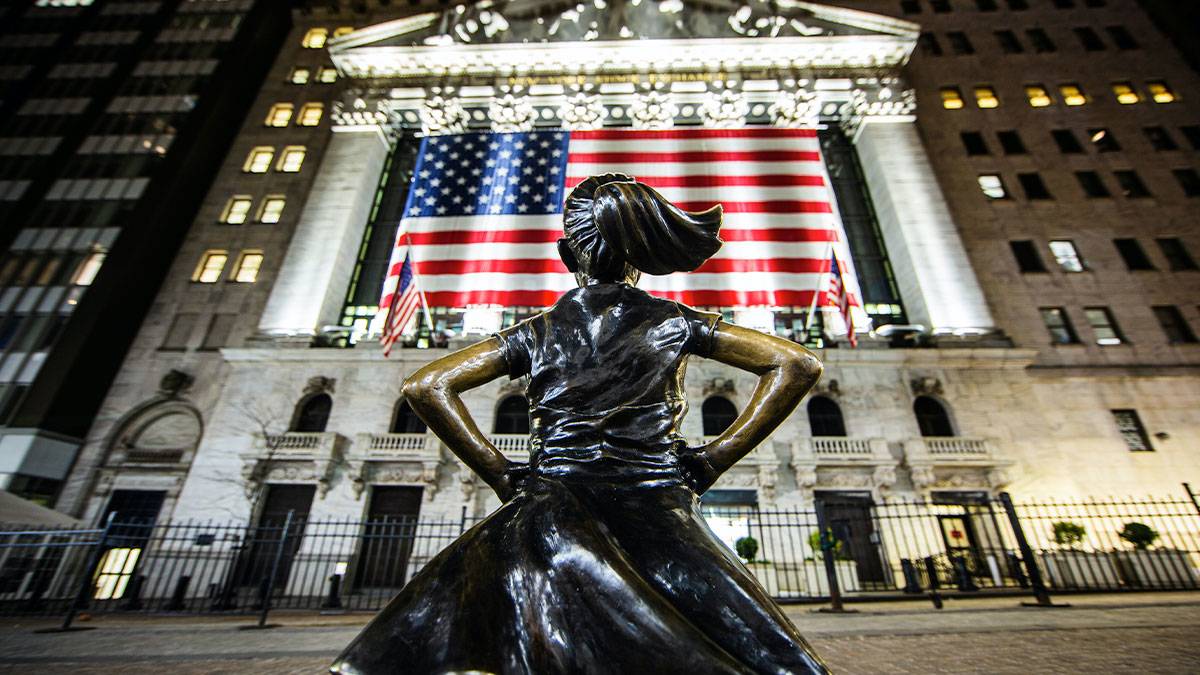 City planners built several skyscrapers during the following century, including 40 Wall Street, once the world’s tallest building. Also known as the Trump Building, this iconic neo-Gothic tower is 927-foot-tall. Architecturally beautiful, it has a limestone facade and spandrels between the windows on each story. At the top of the building is a pyramid with a spire at its pinnacle.

In 1995, a company controlled by Donald Trump took over the lease from former Philippine president Ferdinand Marcos. Commissioners designated it a city landmark and added it to the National Register of Historic Places in 2000. Today 40 Wall Street remains one of the most successful commercial buildings in downtown Manhattan. 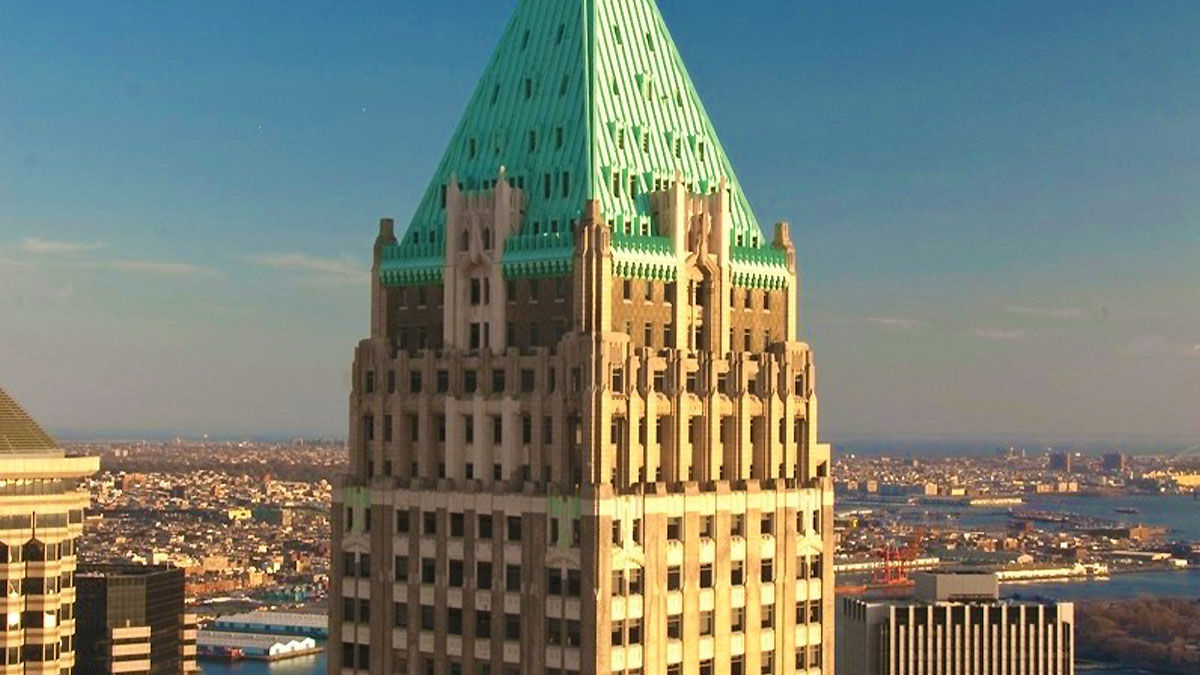 After snapping a photo in front of the bull and Fearless Girl, make sure to check out these other Financial District's must-see attractions:

Don’t miss this incredible area on your Manhattan vacation. It’s the heartbeat of the city and the lifeblood of our country.

Visit this website for guided tours with former traders, bankers, and professionals with insider knowledge of NYC’s Financial District. You can take an in-depth tour for true finance aficionados or a shorter entertaining overview of the area. The Wall Street Insider Tour lasts 75 minutes and costs $39 per person. The award-winning Financial Crisis Tour is an in-depth tour that focuses on historical markers, culture and surprising stories. This tour costs $59 and lasts two hours.

Fun Fact: Martin Scorsese’s film “The Wolf of Wall Street” set a new Guinness World Record for the most swearing in a movie.