Considered among the top of Chicago’s cultural landmarks, Clarence F. Buckingham Memorial Fountain is located along Lake Michigan in the center of Grant Park.

One of the largest fountains in the world, the fountain’s design was inspired by one of the elaborate fountains at the Palace of Versailles in France, Latona Basin. However, it is actually double the size of the original fountain – the size is meant to symbolize the grand magnitude of Lake Michigan!

Where Is Buckingham Fountain Located?

Related Post: 26 of the Most Unique Things to Do in Chicago

Art collector and philanthropist Kate Sturges Buckingham commissioned the Clarence Buckingham Memorial Fountain to commemorate her brother Clarence. The main design was created by Edward H. Bennett, while the fountain’s Art Deco-style seahorse sculptures were devised by renowned French artist Marcel Loyau, who won the Prix National at the 1927 Paris Salon for designing the sculptures. During the Fountain’s dedication in 1927, John Philip Sousa’s band played “Pomp and Circumstance” in front of an audience of 50,000 people.

The Fountain’s four basins are composed of pink Georgia marble and ornately carved granite elements, while the seahorse sculptures are bronze. Sculptor Loyau studied the seahorse collection at a Parisian zoo. The seahorses represent the four states that border Lake Michigan: Illinois, Indiana, Michigan, and Wisconsin.

Originally, the fountain was operated manually by two stationary engineers who each worked a daily twelve-hour shift. Because of this, the water displays occurred only twice a day, three times per week. However, they became so popular that the displays were offered daily in the late 1950s. The engineers used a keyboard with 21 electric switches that produced different light and color effects. 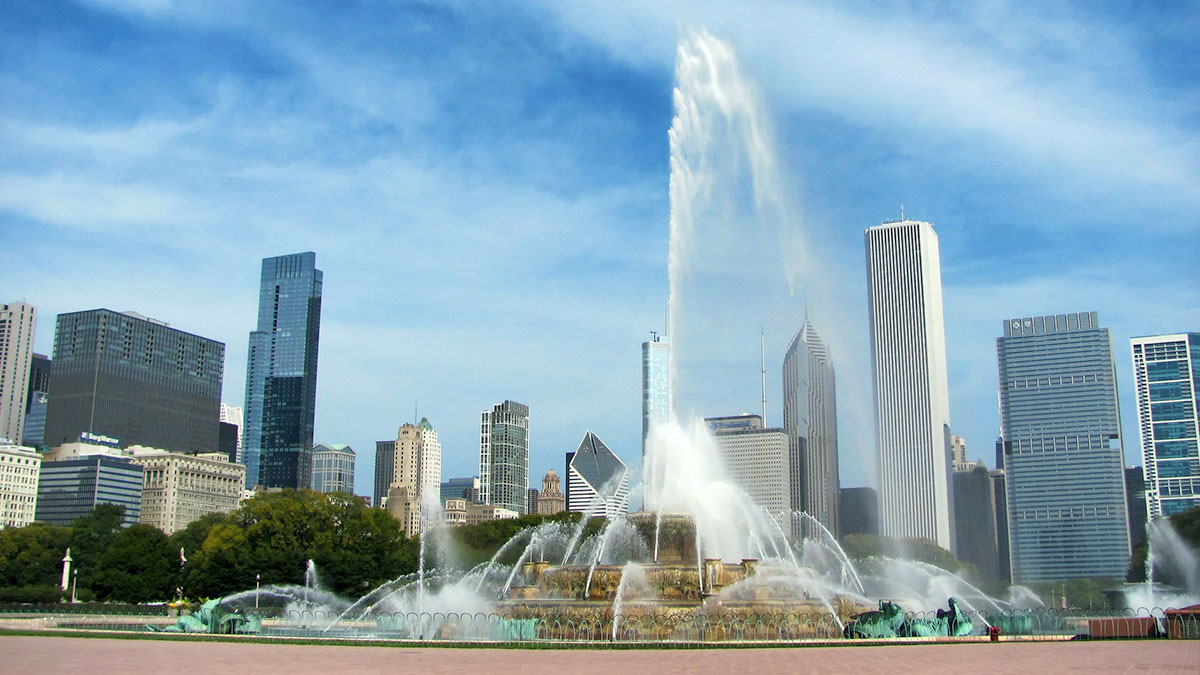 The Buckingham Fountain was featured in the opening credits of the “Married…With Children” TV show.

The light show was first automated in 1968, and the entire system became computerized in 1980. In 1994, the computer system switched from remote operations based in Atlanta to on-site in Chicago. Since the late 90s, repairs and upgrades have been made to keep the fountain operational.

How Does the Fountain Operate?

Buckingham Fountain produces an incredible 20-minute water display every hour. During the major water showcase, a center jet shoots water 150 feet into the air. The water displays are powered by three pumps. The first pump keeps the water running throughout the day, and the second and third pumps turn on during the water display.

Fun Fact: The fountain has its original underground pump house with two levels. The control room is located on the first level, and the lower level pump room is 35 feet long by 25 feet wide. The Fountain’s original pumps and motors are still in operation.

Structure of the Fountain

Kate Buckingham desired to create a fountain that emitted a soft moonlight effect. She worked with technicians to test a variety of glass filter colors and currents to create an ethereal appearance. Altogether, the fountain contains 820 lights.

The Best Time to Take a Picture

The Fountain is open every day from 8 a.m. to 11 p.m., and the fountain is active from May through mid-October. The best time to take a picture at Buckingham Fountain is after sunset when the music and light display comes to life. However, you can see the 20-minute water display every hour on the hour.

Where to Park Near Buckingham Fountain

Street parking can be hard to come by, but there are plenty of parking garages you can take advantage of such as the Grant Park Underground Garage at Monroe and Columbus. Note it’ll be about a fifteen-minute walk from nearby garages.

Public transportation and ride share apps are the easiest ways to get to Buckingham Fountain. That way, you don’t have to deal with parking or a long walk. Visitors can also bike around Chicago by using Divvy Bikes. Rent a bike for a single trip or for the whole day from one of Divvy Bikes’ stations.