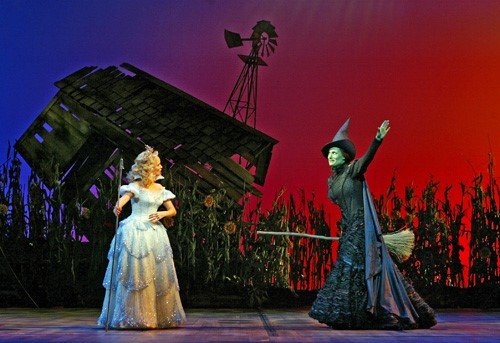 Before Dorothy ever landed in Oz, there was another story taking place. One of two girl’s way before they were good or wicked. The book-turned-Broadway musical by Gregory Maguire flips the scrip on the popular Wizard of Oz, focusing on the The Wicked Witch of the West instead of Dorothy. Inventive in its reverse journey down the yellow brick road, Wicked casts a spell on audiences with its detailed backstories and endearing characters.

Most of the appeal to Wicked lies in its beguiling creation of Elphaba. Even through all her quirky sensibilities, you get her. You sympathize for her. You, gulp, like the Wicked Witch of the West. Enter Glinda the Good Witch, who Elphaba meets at boarding school. You expect for her to be the villain. After all, in The Wizard of Oz they’re enemies. Think again, though, as Wicked unfolds a complicated backstory of friendship – one that is the heart of the production.

Throughout watching Wicked The Musical, all of the questions you ever had about Oz and its characters are answered. Why is Elphaba green? How about those talking animals? What about that flying bubble of Glinda’s? The varying voices establishing Elphaba’s story weave a wonderful world. With bits of old and pieces of new, Wicked is a marriage of unusual styles. Yet, it works – and well.

Wicked Broadway tickets quickly became the hottest item in town when it opened in 2003, and has continued to defy expectations with both its rabid fan base and earnings. Of all the options available for my first Broadway experience, it was the one I picked. After reading the book, I knew I had to see it brought to life on stage. Would it be as good as I had imagined as I devoured pages of the novel? How will the magical scenery in mind fit into the Gershwin Theater? All my questions were answered swiftly once curtains open. More elaborate than I had dreamed, the spectacle was brilliant, the characters endearing and the stage production was just as good as the book – a compliment not easily given.

Of course, one way the Broadway version varies from the book is the soaring score. Whether it’s the emotionally powerful “Defying Gravity” or relatable “I’m Not That Girl,” the score adds rather than retracts from the tale. Just try not to tear up during the tug-on-the-heartstrings duet of “For Good, “during which the two girls-turned-witches say goodbye forever.

The classic tale of good vs. bad is turned into outcast vs. accepted. Revealing layers you would have never conceived as you watched The Wizard of Oz, Wicked is a fairytale worth seeing. And believing in.