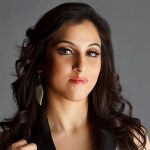 Nestled amongst the lush green Ozark mountains is the crowning glory of the “Cave State.” Silver Dollar City theme park is swirling in a mist of history, fascinating legends, whispered tales, and other-worldly beauty.

A Branson, Missouri attraction for centuries, Marvel Cave is the deepest cave in Missouri and enjoys celebrity near and far.

Built in homage to the town of Marmaros, Silver Dollar City is conceptually identical to this town from the 1800s. Wooden huts nestle amongst oak trees, blacksmiths, bakers, old-world dentists, and mouth-watering delicacies overpower your sense.

As your eyes begin to twinkle at the prospect of the day ahead, you spot the entrance to Marvel Cave. Are you ready to answer its siren call? Read on to find out what lies on the other side……

History of Marvel Cave: Where it All Began

In 1541 Spanish explorers braved the depths of Marvel Cave in pursuit of the fountain of youth. Unfortunately, no such fountain or elixir was found, but they brought Devil's Den into our world.

They could have saved themselves the heartache by simply asking the local Osage Indians. But, having lost a tribe member down its sinkhole opening, Osage Indians had reached a healthy truce with Marvel Cave.

Pro Tip: Osage Indians named Marvel Cave "Devil's Den" because of strange noises that floated up from its depths.

Then Came the American Explorers and Miners

"Fortune Favors the Bold," and North Americans have always sported this virtue.

An 1869 exploration of Marvel cave for lead triggered excitement over striking marble instead. A presentiment of abundance fashioned a mining company and a town called Marmaros around Marvel Cave.

No marble or lead was mined at Marvel Cave, but all was not lost. 80,000 bats living in Marvel Cave gifted the explorers bat guano, an ingredient essential to gunpowder.

Canadian William Lynch opened Marvel Cave to the public and pioneered tourism within the cave. As a result, marble Cave and Marvel Cave were used interchangeably about this natural wonder.

In the 1950s, Marvel Cave moved into the hands of the Herschend family, who built Silver Dollar City around it.

Gather around for storytime! We neither confirm nor deny that Marvel Cave is haunted, but these tales will get your heart racing!

500 feet under the surface of the Earth begins your historical adventure. Marvel Cave is a dreamlike sight to behold with the largest cave entrance room in the United States.

Ready to descend into the unknown? 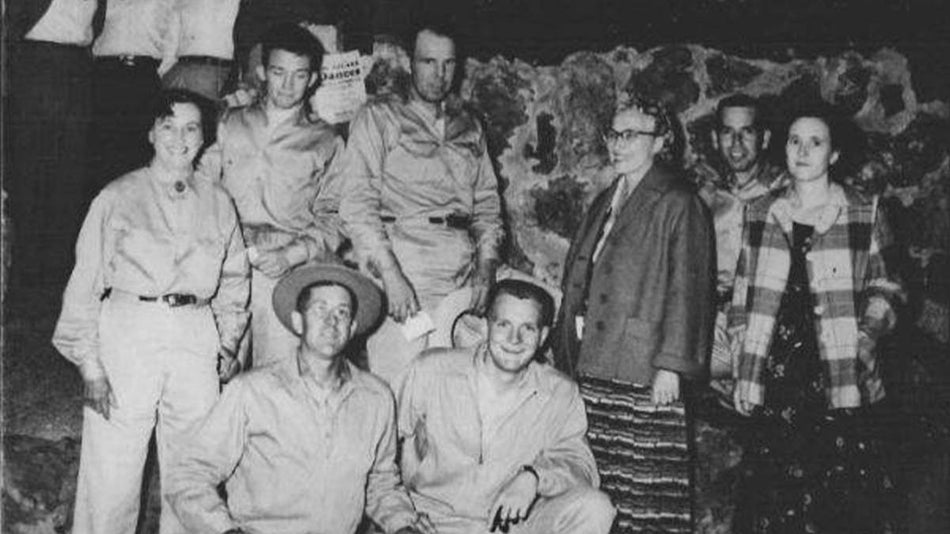 Marvel Cave follows the Silver Dollar City calendar and is open from March to December each year. Nevertheless, it's always wise to consult the official calendar before planning your trip.

Marvel Cave and Silver Dollar City follow the same schedule, and you can visit between 9:30 AM to 6 PM. However, silver dollar City is immensely popular, so you would do best to be there at least an hour before the park opens.

Pro Tip: Open at 8:30 AM, Molly's Mill restaurant is the perfect place to fuel up for the day.

Entry to Marvel Cave is included with your Silver Dollar City tickets.

Spread over 61 acres, Silver Dollar City is a challenge to cover within a day.

But, with some extra time and an extended trip, you can do it! So, keep an eye on our amazing ticket packages and snag the best deal.

Majestically grand, Marvel Cave is where it all began. When the Herscend family leased the cave from William Lynch's daughters, they built Silver Dollar City theme park around it.

Related Post: 27 Unforgettable Romantic Things to Do in Branson for Couples

Today Marvel Cave tours take 45 people at a time through the labyrinthically winding passages deep below our world. Your adventure will last 60 minutes, but it will stay with you for a lifetime.

Pro Tip: Like nature, Marvel Cave has its exceptions and is best avoided by those with special access needs and heart conditions 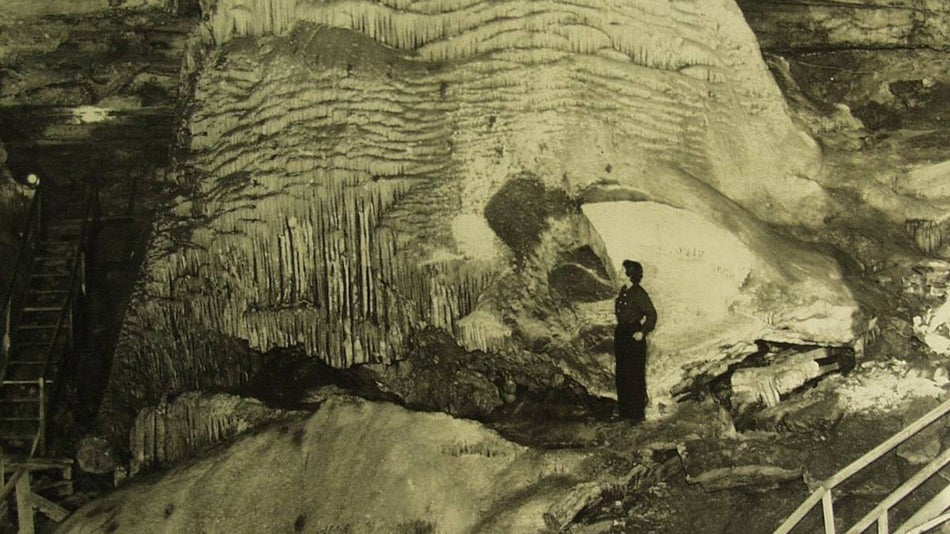 The limestones and various mineral deposits can make Marvel Cake slippery. Add all the steps you need to walk down, and flat shoes fast emerge as your only option.

Pro Tip: Do not wear leather shoes inside Marvel Cave as contact with the mineral deposits may ruin them.

A day at a theme park, especially one with a cave, is no walk in the park (pun, totally intended). Dress in soft fabrics with minimum drape and flow. Flowing and loose garments tend to get snagged and gather dirt rather quickly.

Pro Tip: No matter how hot the summer is, never wear flip-flops inside Marvel Cave. You'll find yourself slipping around.

Temperatures within Marvel Cave remain consistently balmy at a steady 50 – 60 degrees. While this is comfortable for most, do adapt your outfit if you are prone to being too hot or cold.

Photo Alert! Adorn yourself in bright colors to complement the warm lighting in Marvel Cave.

Silver Dollar City is easily accessible at a 14-minute drive from Branson, a long way from the days of arriving on horseback.

Related Post: 2022 Guide to Spring Break in Branson: Where to Go & Things to Do

Park your car for free and hop on the shuttle service from one of the nearby stops.

Pro Tip: Disabled parking has limited spots, but a parking attendant is on hand to help when those run out

Congratulations on grabbing the best ticket deals! Are you ready to descend 600 steps into the most extensive cave entrance room in North America?

Your first stop in the magical Devil Den is the Cathedral Room. A winding staircase bequeaths panoramic views of the cave, transporting you to another world even before you alight.

Follow the tour guide as they take their place in front of a natural waterfall. Against the sound of gently tumbling water, you'll learn about the limestone that tricked many that came before.

Tour Guides will delight you with stories of explorers and miners traversing the cave's challenging entrance. Edifying facts about the mining and transportation of bat guano will give you a renewed appreciation for technology.

Pro Tip:  A single candle is all the explorers had, and occasionally the tour guides recreate that experience for you!

Is it an optical illusion, or is this room actually unnaturally large?

Definitely not an optical illusion, the Cathedral Room is tall and wide enough to fly five hot air balloons simultaneously.

How do we know? Well, it's been done before! In 1994 five hot air balloons were launched inside Marvel Cave to celebrate its 100th anniversary. The sight was so majestic that people still talk about it today!

It is your lucky year! The Mammoth Room, which was last toured in the 1950s, is now throwing its doors open for you.

Over 80,000 bats belonging to at least three different species cling to the wall of the Mammoth Room. As strange as the sight is, it's oddly soothing to see so many of them "hanging" in peace. Psst…Vampire movie scenes of being rushed by bats need not be your concern as bats sleep during the day.

An abandoned Spanish staircase from the 16th Century rests rather forlornly against the wall. Out of Commission for over 4 Centuries, it can still spark your imagination about the Spanish exploration of Marvel Cave.

Pro Tip: Best avoid a big meal before heading to Marvel Cave as it is devoid of any facilities.

Did we say underground lakes? Absolutely!

Lakes Genevieve and Miriam run almost 34 feet deep and even contain underwater passages! Much exploration has revealed ends to some of the submerged passageways, but many others remain uncharted.

Will the intrigue never end?

The Spring Room sports several waterfalls and bright orange walls, a wonderland of its own. The walls owe their color to orange calcite mineral deposits. Think quartz with orange coloring!

Related Post: 7 of the Best Things to Do in Branson for Adults

Fun Fact: The Spring Room waterfalls are so beautifully concealed that they gave rise to the "fountain of youth" theory.

It is unimaginable that such resplendent beauty would not have inspired a writer's heart. Inspire it did and with such precision that it produced a bestseller.

Harold Bell Wright wrote parts of The Shepherd of the Hills inside this very part of Marvel Cave. Being friends with the Lynch family came with the added perk of unrestricted access to Marvel Cave. Sitting in a cabin within this passage, Wright designed his Ozark people literally from within the heart of the mountains!

Photo Alert! Take a picture with the cabin that stands in the place of the original. Who knows, it may inspire your very own bestselling novel?

Navigating over eight rooms and six passages in this ethereal cave will enchant you. Marvel Cave has a cable train that carries you back to your world to protect this delicious high.

Fun Fact: Look up as you get to the train stop! The Cable Train Tunnel is located in the Elves Chamber, whose ceiling is covered in stalactites and helictites.

Marvel Cave Lantern Tours are one of the park's most popular attractions. Lasting 90 minutes, these tours are a flavor of days gone by.

You will be handed a lantern to guide your path without electric lighting. Then, donning period costumes, your tour guides will show you the Marvel Cave of ancient times.

An 1800 village theme does not mean that Silver Dollar City is without excitement. Over 40 rides, 60 shops, over a dozen restaurants, and 40 live shows ensure there is plenty for you to experience.

You've probably emerged from Marvel Cave with a hunger for more historical experiences. Tripster understands what your heart craves, and we have isolated some history-based activities for you to enjoy!

Rides and attractions at Silver Dollar City are as unforgettable as the park itself. A trip to SDC won't be complete without enjoying at least a few of them.

We figured you could do with some recommendations with so much to choose from. Buckle up for these hand-picked unmissable experiences:

Artisans of Yesterday, Today, and Tomorrow

Silver Dollar City does not just entertain but also educates!

By displaying live crafts throughout the park, SDC generates awareness of the skills and expertise of various artisans.

Watch these skilled artists demonstrate their craft and maybe even treat yourself to a few goodies by:

Photo Alert! Stop by Valley Woodcarvers to take a picture with the larger-than-life wooden Santa.

There are more options than one can count when it comes to dining. Tantalize your taste buds with delicious meals from:

Related Post: The Best Things to Do in Branson with Toddlers

Beat the 4 PM slump with treats, drinks, and desserts from:

Don't want to commit to just one? Then, there is a Farmer's Market in Wilson's Farm where you mix and match!

You've met the artisans and filled your shopping bag with fantastic handcrafted goodies. However, the ambiance of SDC is such that you want to hold on for as long as possible.

Cement your attachment by picking out your heart's desire from:

Spending two days in the lap of nature deep within the Ozarks is immensely addictive. Don't be surprised if you begin to crave this place more than sugar itself!

Head to Marvel Cave in Silver Dollar City this spring or summer to spark your imagination, delight your soul, and make artisan friends.

Have Any Legends, Historical Trivia, or Spooky Experiences to Add?