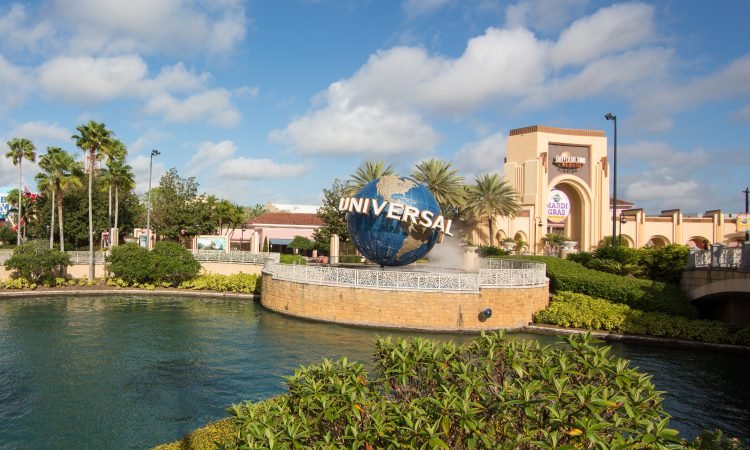 If you have time and your budget allows for it, we suggest visiting both parks. Each offers a unique experience all its own. However, you may only be able to visit one park and that’s okay too! You’ll still have a blast. No matter how long you get to spend at Universal Orlando Resort our breakdown detailing the differences, highlights, and must-dos of each park will be super helpful.

Universal Studios vs. Islands of Adventure: Before We Start

Before we dig into the details, it’s important to have a basic understanding of what each park offers.

If you’re a movie or pop-culture fanatic, the character-driven attractions at Universal Studios Florida will stand out. Many of the attraction here are themed around entertainment. (Think The Simpsons, Transformers, Despicable Me.) In addition, many of the rides are 3D rides.

Superheroes, action-movies and, well, adventure are the signatures of Universal’s Islands of Adventure. This park is geared more towards daring thrills and has more of classic theme park vibe.

But wait, you might be thinking, what about The Wizarding World of Harry Potter™? This highly themed area of Universal Orlando Resort now spans both parks. The first section, Hogsmeade™, began in Islands of Adventure. Since then, a second section, Diagon Alley™, has opened in Universal Studios. In order to visit all of The Wizarding World of Harry Potter™, you’ll need to purchase a Park-to-Park Ticket. This is by far the best way to not only see all of the Harry Potter™ attractions but to experience all of Universal Orlando Resort as well.

Keep in mind, Hogwarts Express travels between both sections of The Wizarding World of Harry Potter™. And, a ride aboard this train is a must!

With that said, are you ready to for the showdown between Universal Studios vs. Islands of Adventure? Let’s go! 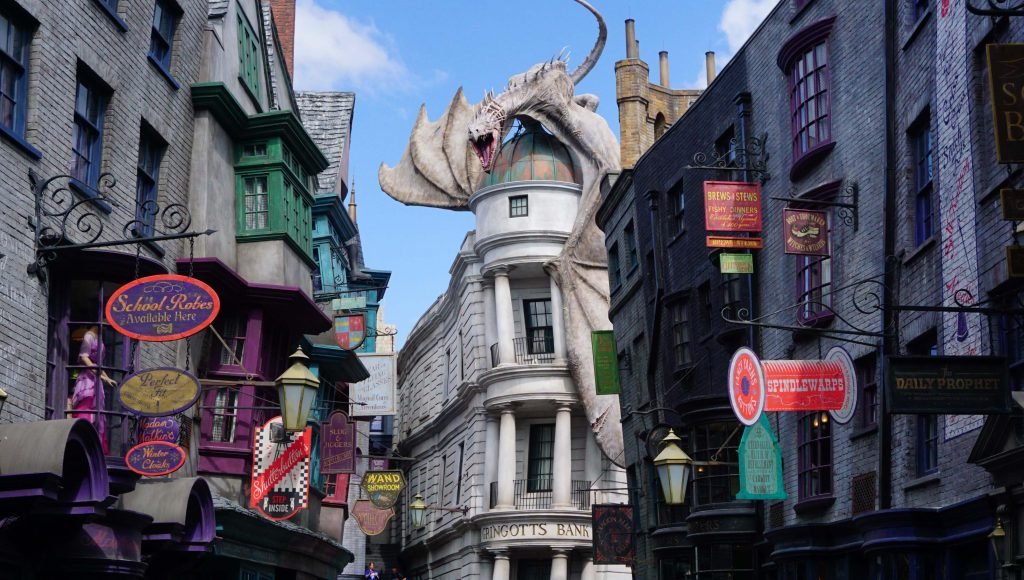 Best Overall: Harry Potter and the Escape from Gringotts

If you’ve been paying attention at all to Universal Orlando Resort, you know they’ve dedicated a lot of park space to The Wizarding World of Harry Potter™. And it has paid off! This is certainly true of the Harry Potter and the Escape from Gringotts 4-D attraction. As the featured attraction of the Diagon Alley™ section of The Wizarding World of Harry Potter™, this ride is impossible to miss. Why so? Well, the fire-breathing dragon at the top of it is a pretty good identifier. Not only is the theming of this attraction top notch, but the journey with Harry Potter™ and friends via coaster then simulator through Gringotts Bank is also a daring mad dash featuring goblins, Bellatrix and even Voldemort. It’s great fun for everyone!

Of course, Diagon Alley features other must-dos including dining at The Leaky Cauldron™ and buying a wand at Ollivanders™: Makers of Fine Wands since 382 BC. 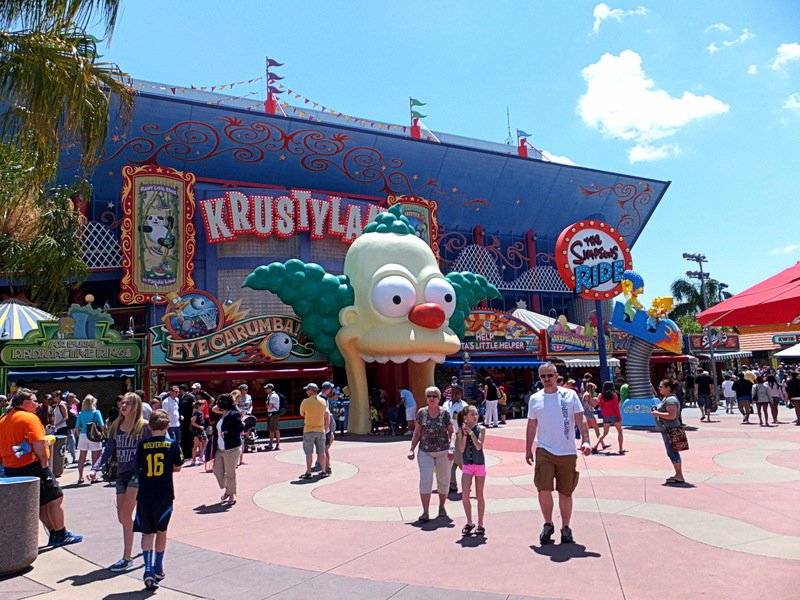 Visiting Springfield, the Universal Studios section dedicated to all things The Simpsons, prepare to enter a cartoon world come to life. The vibrant colors and over-the-top designs are a true showcase of this animated classic. Eat at Krusty Burger or grab a drink at Moe’s. Then, go on a 4D adventure with The Simpsons on an action-packed virtual ride. We continue to be as impressed by this ride as we were when we first rode it the summer it debuted. From the queue entertainment to the truly zany adventures of The Simpsons family, this over-the-top virtual reality experience is engaging from start to finish. 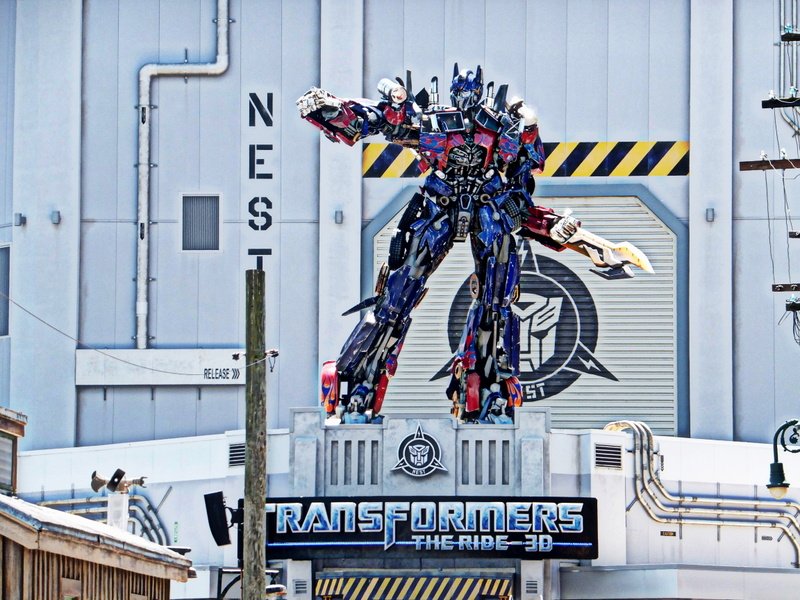 Best Place to Save The World: Transformers: The Ride – 3D

If you’re searching for a daring adventure where the fate of the world is at stake, look no further than Transformers: The Ride – 3D. On this motion simulator attraction, fight alongside Optimus Prime and Bumblebee as they battle to keep our planet safe from the Decepticons.

It’s hard to beat the classic attraction that is E.T. Adventure. It might not be as thrilling as other attractions, but riding a bike with E.T. across the night sky is a nostalgic good time. 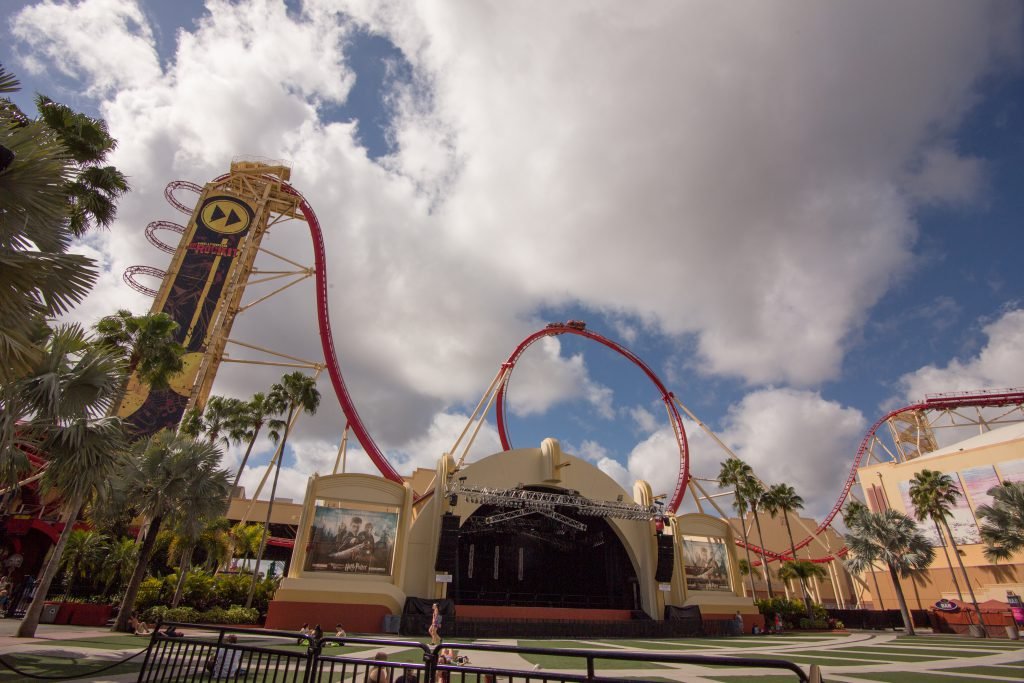 The only true outdoor coaster at Universal Studios is Hollywood Rip Ride Rockit. And, if you’re going to only have one outdoor coaster, this is a good one to have! On this ride, you can choose your own soundtrack to rock out to as you navigate drops, twists and turns at 65mph. It’s a real rush and not for the faint of heart. 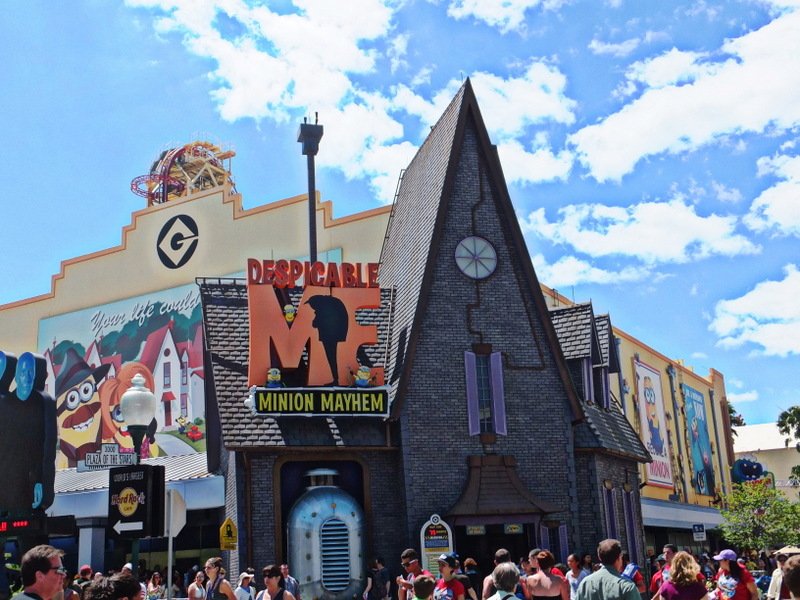 Minion, minions, everywhere! If you’re visiting the park with little ones, you won’t want to miss Despicable Me Minion Mayhem. You’ll undergo minion training before being launched into a zany trip with Gru and crew. The minions create plenty of mischief and host a dance party, too. The thrills are tame but kids love this ride.

Join Dom, Letty, Hobbs, Roman and the rest of the crew for a high-speed ride along through the high-octane world of the Fast & Furious blockbuster films. This ride starts in an actual recreation of the crew’s headquarters, complete with real movie props and vehicles. Then, you’ll board a party bus that comes under fire by none other than Owen Shaw. Hold on to the edge of your seats as you encounter car jumps, rockets, and even helicopters in an effort to escape!

Revenge of the Mummy technically wins this category by default as it’s the only indoor coaster at Universal Studios. But, that doesn’t mean it’s any less awesome! Regardless of whether you were a Mummy franchise fan or not, this attraction is entirely entertaining. As you try to ward off the evil of Imhotep, the indoor coaster plunges into darkness as huge fireballs, swarms of scarab beetles and an army of warrior mummies attack you. It’s like a movie come to life but without the simulator effect so many other Universal Studios attractions rely on. 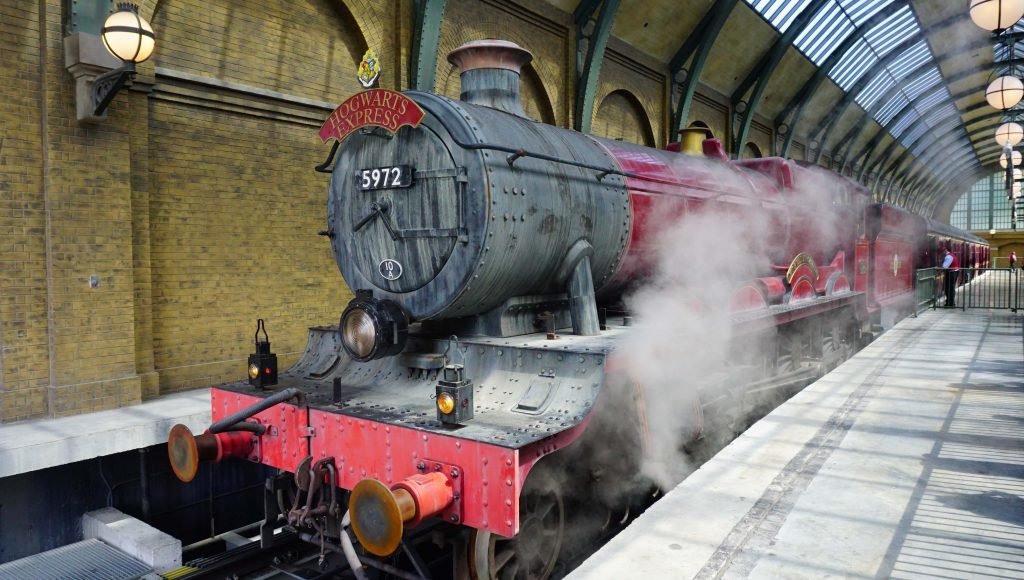 You can ride Hogwarts Express from both sections of The Wizarding World of Harry Potter™. However, we recommend boarding from the Diagon Alley™ side as you depart from King’s Cross Station. As a result, you’ll get to stop by the top secret 9 3/4 platform just like Harry Potter™.

For us, it’s a tie between Fast Food Boulevard and The Leaky Cauldron™. Fast Food Boulevard is an excellent option for food court style dining if you’re in the mood for items like burgers, chicken fingers and fried seafood. As it has a Simpsons theme, Krusty Burger, Cletus’ Chicken Shack, and The Frying Dutchman are the featured restaurants. Outside, the Bumblebee Man’s Taco Truck serves, you guessed it, tacos.

The Leaky Cauldron™ is a good option if you’re looking for more of a sit-down, eat-with-a-fork type of meal. The British fare certainly isn’t your typical theme park food, though. As such, the menu includes items like fish and chips, bangers and mash, and cottage pie. 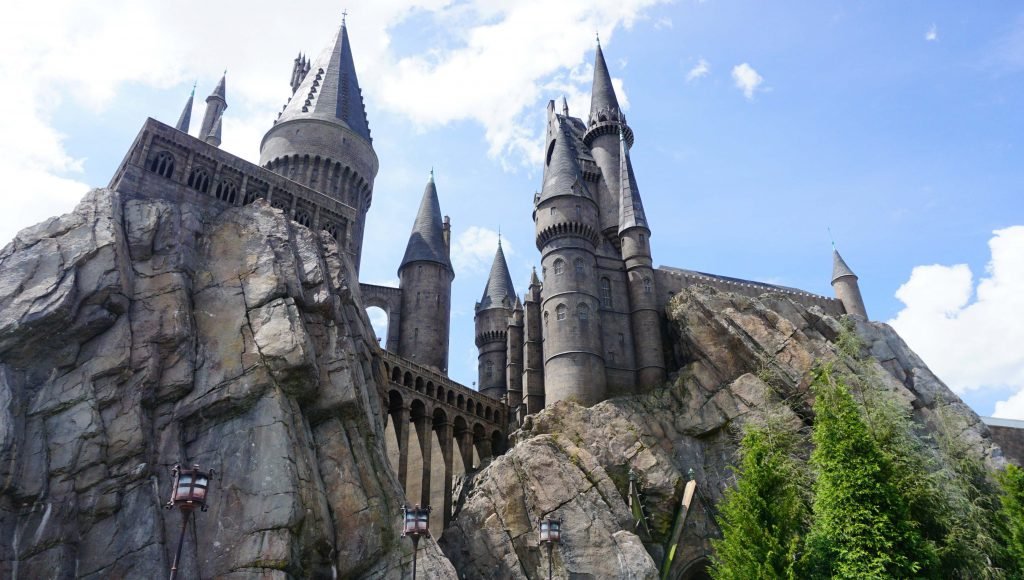 The Wizarding World of Harry Potter™ – Hogsmeade™ is the most transportive of the Harry Potter™ worlds. The replica of Hogwarts™ Castle, along with the cobblestone, shop-lined streets, are brilliant. Plus, the dark ride Harry Potter and Forbidden Journey™ is a state-of-the-art indoor motion ride filled with high-flying fun.

Even if you’re not a huge fan of Harry Potter™, it’s hard to deny the sheer awesomeness of this immersive section of the park. So, grab a butterbeer and prepare to be impressed! 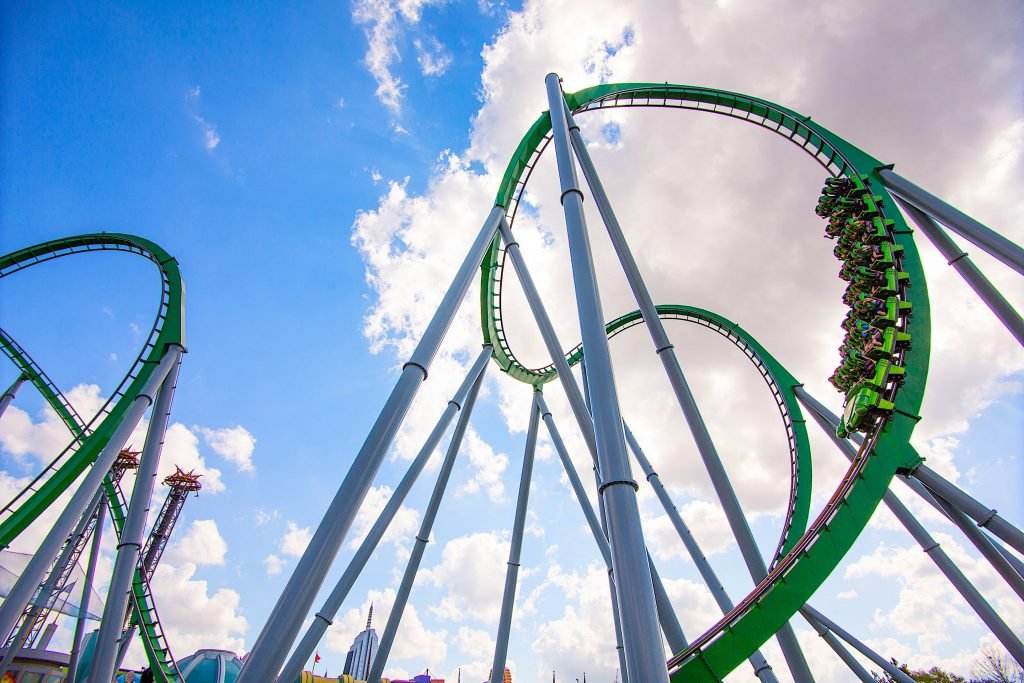 Get ready to “hulk-out” on The Incredible Hulk Coaster®, the soaring, loop-filled Islands of Adventure attraction. The can’t-miss green steel coaster bursts out the gate, reaching speeds up to 40mph in two seconds flat. It’s such an amazing attraction, it’s one of our favorite coasters not just at Universal Orlando Resort—but anywhere. 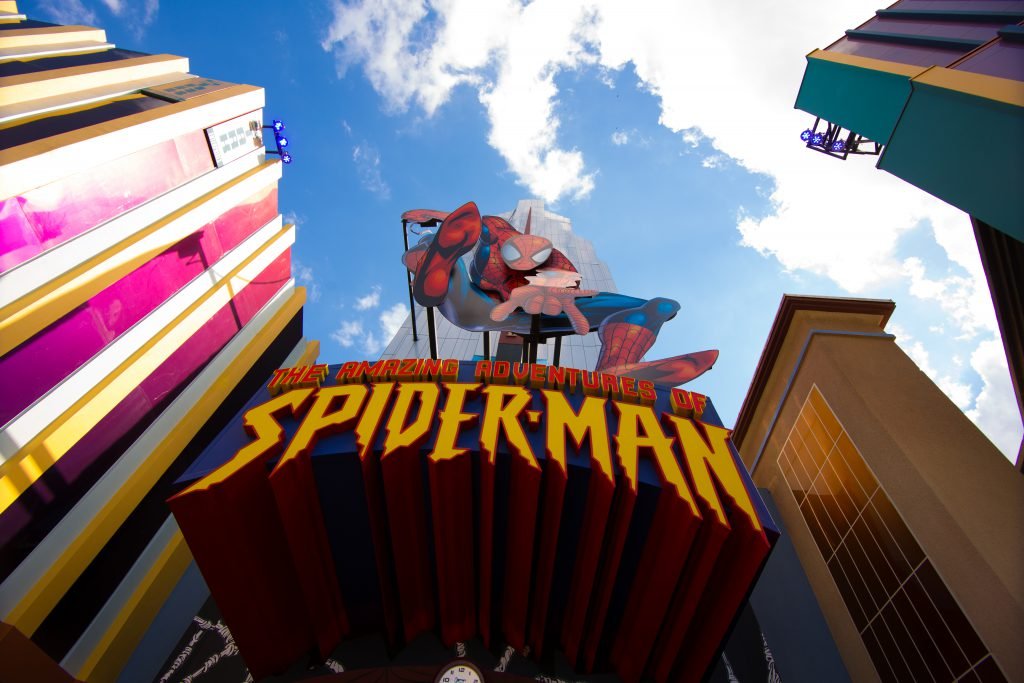 Superlatives don’t do The Amazing Adventures of Spider-Man® attraction justice. Soar through the streets with Spider-Man on the first-ever combination of moving, motion-based ride vehicles, 3-D film, and live action. 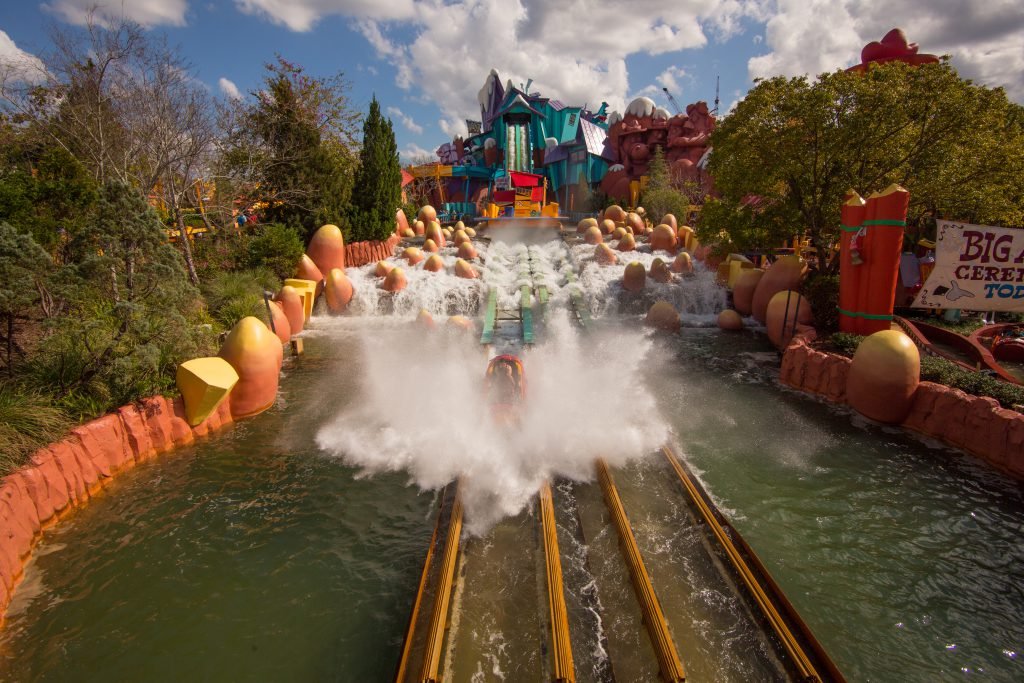 If you’re looking to escape the Florida heat, climb aboard Dudley Do-Right’s Ripsaw Falls®, a themed log-flume ride set in the Canadian mountains. Experience a 75-foot drop, then plummet below water level for a real rush! Be warned—this ride will leave you soaked. 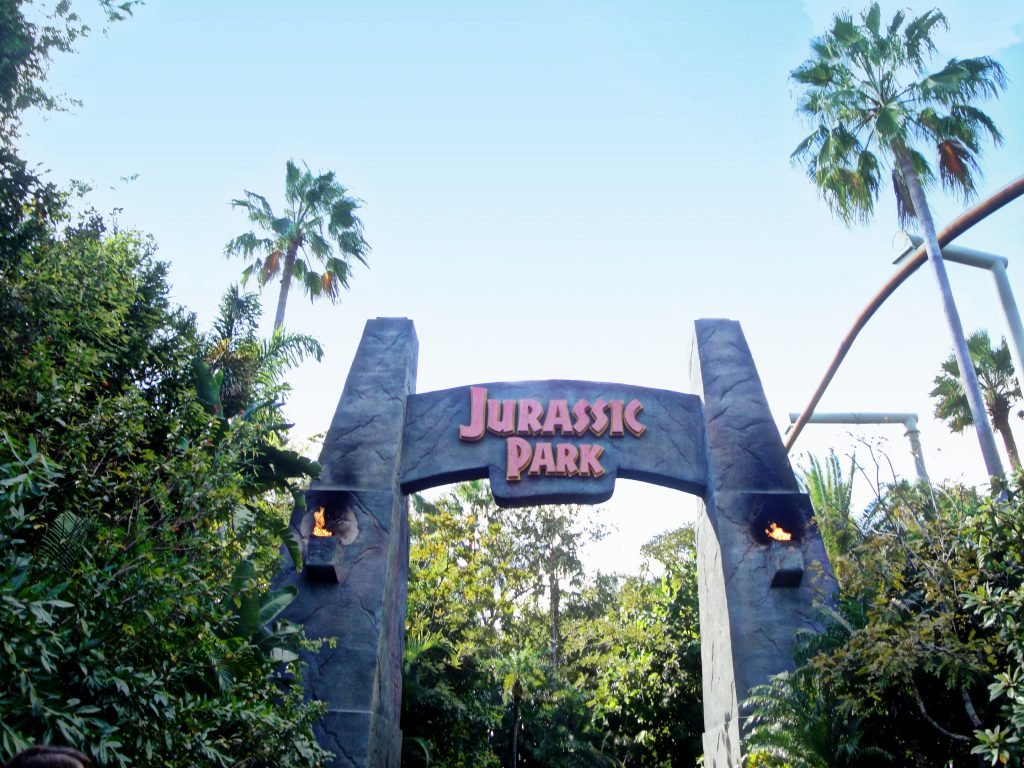 More wild water thrills are featured at Jurassic Park River Adventure. On this ride, float past dinosaurs before being taken off-course into a restricted Raptor Containment Area. Before T-Rex has you in his jaws, plunge 85-feet into total darkness. Sound fun? It is.

Caro-Seuss-el™ is more than just a carousel; it’s a twirling, straight-out-of-a-Seuss book joyride. Hop on elephant birds from Horton Hatches the Egg; twin camels from One Fish, Two Fish, Red Fish, Blue Fish™; and cowfish from McElligot’s Pool. Trust us, this is kid-sized fun even adults like. 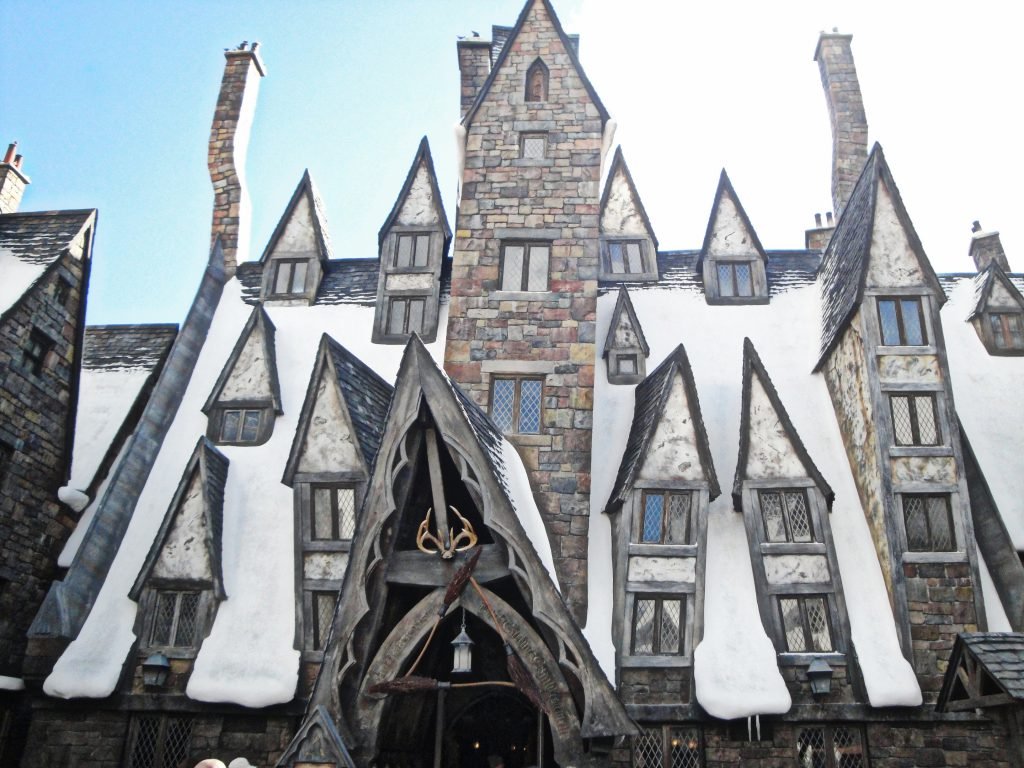 Both of these eateries are solid options when dining at Islands of Adventure. Thunder Falls makes the list due to its crowd-pleasing menu of chicken, ribs, and wraps. Of course, the Three Broomsticks is hard to pass up as not only does it serve surprisingly delicious British food but the theming is incredible. You can’t go wrong with either option.

Universal Studios vs. Islands of Adventure: Which is Your Favorite?