The Painted Ladies in San Francisco

The celebrated sightseeing attraction, the Seven Painted Ladies, is an addition to any San Francisco vacation experience. Aside from the Golden Gate Bridge, the street called Painted Ladies Row is one of the most photographed areas in San Francisco.

San Francisco’s famous Painted Ladies in Alamo Square is one of California’s most celebrated unofficial landmarks. Though they never made the historic registry cut, the seven homes are a part of the city's Alamo Square Historic District.

The iconic San Francisco neighborhood of the Painted Ladies is located at Steiner Street between Grove Street and Hayes Street, across from Alamo Square Park in the Fillmore section or Haight-Ashbury area of San Francisco.

Related Post: 21 Unforgettable Romantic Things to Do in San Francisco for Couples

The Alamo Square block with its skyscrapers, elegant architecture, and grassy park square is stunning to behold. These magnificent colorful mansions, well-known in California Victorian architecture circles, denote San Francisco’s culture and landscape. The significance of these homes has enriched the community and history of the city.

Photo Alert: The quaint architectural model houses with their gorgeous skyline backdrop are an Instagram must! Experts say the best shots are between 1:00 -2:00 p.m. or when the sunsets in the west casting a glow over the homes. (Not in the morning!)

Painted Ladies are Victorian and Edwardian houses repainted in three or more colors to enhance the architectural design. The color embellishments aren't typical of historic Victorian homes but unique to the San Francisco culture of the 1960s and other U.S. cities across the country such as New Orleans, Louisana, Baltimore, Maryland, St. Louis, Missouri, and Cape May, New Jersey. Some say the elaborate colors symbolized the California Gold Rush when citizens wanted to show off their newfound wealth with dramatic balconies, turrets, and windows.

The expression "Painted Ladies" actually started in the late 1970s when authors Elizabeth Pomada and Michael Larsen penned their book Painted Ladies: San Francisco's Resplendent Victorians. In the early 1900s, San Francisco builders put up about 48,000 homes in the Victorian and Edwardian styles. The Four Seasons Rowhouses on Waller Street are another San Franciscan Painted Lady neighborhood, but the row of Victorians at 710-720 Steiner Street is the most famous. Also called Postcard Row and the Seven Sisters, architect Matthew Kavanaugh built the houses between 1892 and 1896. In 1892 Kavanaugh lived in the 722 Steiner mansion, the oldest and most elaborate of the Seven Sisters.

Fun Fact: The last time one of these celebrated Queen Anne-style homes sold in 2014, it went for a cool $3.1 million.

Postcard Row has been mass-marketed in photographs, art, and over 70 advertisements, movies, and television shows that include Invasion of the Body Snatchers and Full House. 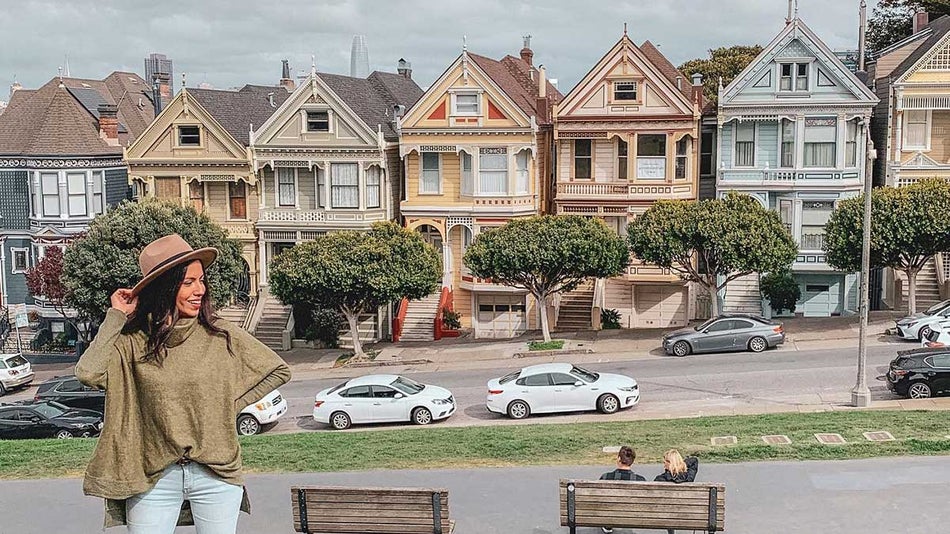 Unfortunately, these postcard-perfect homes have created havoc for the occupants living there, with heavy traffic, tour buses with megaphones, and looky-loos hoping to snap a picture in front of Uncle Jesse's house. In 2013 the city tried (unsuccessfully) to ban tour buses from the 25-square block area of Alamo Square Park. The park features a full tennis court, walking trails, swingsets and climbing structures for the kids.

At one point, Alice Walker, renowned author of The Color Purple lived in the 720 Steiner home and was notorious for throwing impromptu concerts in her backyard that drew complaints from neighbors.

Fun Fact: The row of charming houses is captured in the opening credits of the television show Full House from the 1990s. The real-life location of the Tanner home is actually 1709 Broadrick Street, in the Lower Pacific Heights neighborhood a mile from the Painted Ladies.

Directions: Take Muni line #21 westbound from downtown to the corner of Hayes and Steiner Streets. The drive from Fisherman's Wharf is approximately between 40 to 45 minutes. For additional routes, visit the San Francisco Municipal Transportation Agency.

Fun Fact: One of the Seven Painted Ladies has a tiny museum on its top floor. Some museum items include a ticket to the opening day of the Golden Gate Bridge, pictures of the 1906 earthquake and fire, and 100-year-old wedding cake tops and clothing from the 1800s.

Tours of the Painted Ladies

"Take Walks" tour company provides a rare opportunity to look inside one of these historic edifices. These inside and outside neighborhood tours last about three hours.

The celebrated sightseeing attraction, the Seven Painted Ladies, is an addition to any San…