For the ultimate coffee experience, visit Starbucks ’ flagship store in Seattle, Washington. Thousands of tourists flock to this iconic tourist attraction known as the “birthplace of a worldwide phenomenon.”

Starbucks first offered customers its fresh roasted beans in Seattle’s historic Pike Place Market. Then the conglomerate expanded to other flagship stores in Chicago, California, Washington, D.C., New York and Vancouver, Canada. Now, with over 33,800 locations in 80 countries (15,444 located in the United States alone), the innovators of the coffee culture aren’t slowing down.

Today the Starbucks Corporation, headquartered in Seattle, is a multinational chain of baristas and roastery reserves. The world’s largest and most famous coffeehouse's mission is “to inspire and nurture the human spirit-one person, one cup and one neighborhood at a time.”

Pro Tip: The Pike Place store is notorious for a line that goes straight down the block, so come early to beat the crowds. The Pike Place cafe is only 1,000 square feet.

Then in 1983, we have New Yorker Howard Schultz to thank for bringing the coffeehouse concept to the team. While traveling in Milan, Italy Schultz fell in love with the coffee shop experience and brought it back to the states. Founders tested the idea in its downtown Seattle store, and voila! The first Starbucks® Caffe Latte was born. Later, in 1996 they opened the first international store in Japan, followed by Europe and then China.

Today, the barista serves hot and cold drinks, espressos, Caffe lattes, full and loose-leaf teas, Frappuccinos, pastries, and sandwiches. Inside the original shop, you’ll find scraps of leather covering the bar, walnut on the door and tables, and old-school signage from an area high school.

Fun Fact: Owners chose “Starbucks” as the name after a character in the famous novel Moby-Dick by Herman Melville. Starbuck was the name of the first mate on the ship, Pequod.

Related Post: Things To Do in Seattle This Fall: Your Weekend Guide

As a beacon of ingenuity, the chain's marketing team keeps fresh ideas rolling in. For instance, most locations provide free Wi-Fi internet access. Then in 2004, Starbucks teamed up with Concord Records to distribute an album with Ray Charles. The legendary Charles recorded the duet album with stars like Nora Jones, James Taylor, Elton John, Willie Nelson and Bonnie Raitt. As a result, the album received eight Grammy® Awards and sold more than five million copies.

Moreover, Starbucks is found at 35,000 feet in the air, as Delta and Alaskan Airlines serve the freshly brewed variety.

In 2013 owners purchased a coffee farm in Costa Rica and began offering virtual tours of the farm and global Research and Development facility.

Fun Fact: Starbucks Reserve Roastery in Chicago on Michigan Avenue is the largest Starbucks store globally. The massive five-story location on the Magnificent Mile covers more than 35,000 square feet. Guests can experience interactive tours or sip a cappuccino on the rooftop deck.

Related Post: How to Make the Most of One Day in Seattle 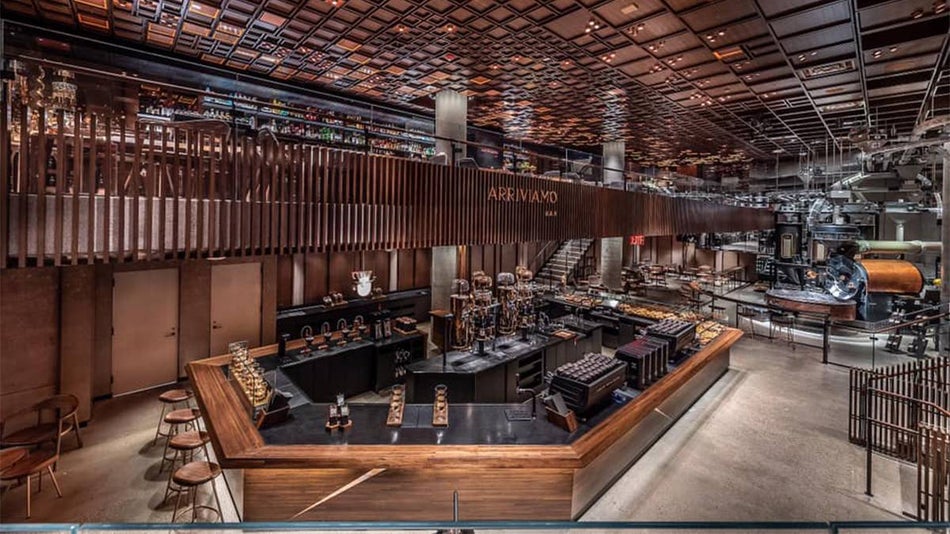 Pro Tip: Try a coffee-inspired cocktail at an Arriviamo™ bar or delight your senses at the Princi™ for delicious Italian paninis and treats.

After grabbing your cup of Joe to go, explore the historic Pike Place Market, the oldest existing farmer market in the country. Market vendors include fresh produce, flowers, jams, honey, jerky, pasta and more. In addition, to the famed coffee shop and street stalls, Pike Place has several bars, restaurants and fun shops.

Photo Alert: Document your Seattle trip with a photo in front of the original 45-year-old Starbucks sign.

Pike Place Market and the original Starbucks are wheelchair accessible.

Fun Fact: The chain’s logo features a siren, which is a super mermaid with two tails. Given Seattle is a port city and the name ‘Starbucks’ came from a book about the sea, creators sought a water theme for their insignia.