Located on the Boston Freedom Trail, Quincy Market is rich in history, entertainment, and shopping. The Market has more than 50 shops, 14 restaurants, and 40 food courts. It has also been the home of Boston’s most popular comedy clubs, Comedy Connections and Faneuil Hall Comedy.

Boston’s most famous market is known as one of the largest market complexes built in the United States. “Quincy Market” is sometimes used to describe the entire Marketplace complex, including the North Market, South Market, and Faneuil Hall.

As one of the first festival marketplaces in the country, Quincy Market revitalized the downtown neighborhood and paved the way for several cities from New York to Los Angeles to become mixed-use areas. Designated a National Historic Landmark in 1966, the Market is also listed on the National Register of Historic Places.

What started in 1826 as a small grocery store has evolved into a celebrated marketplace with food stalls, fast food eateries and quaint restaurants. Known as a trendy lunchtime attraction for workers and tourists, the market has a two-story seating area surrounding its famous dome.

Quincy Market is the only double elliptical dome in the country. It’s one of the few surviving decorative components of architect Alexander Parris ’ interior design from the 1820s. The rosette at the dome’s ceiling provides a focal point for the rotunda. 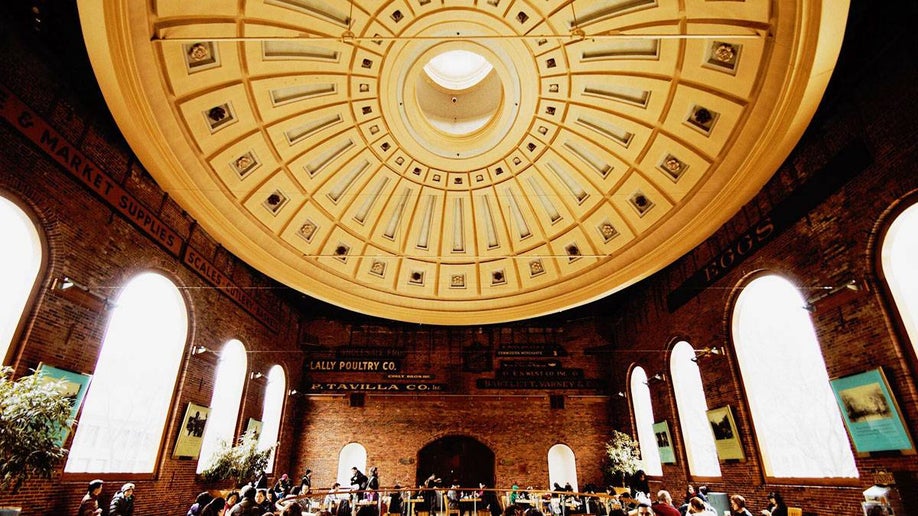 Photo Alert: Inside the market, make sure to snap a photo of the incredible dome. At Christmas time the town strews festive lights from its center which is quite spectacular!

There’s much sightseeing near the market, and history buffs should be delighted to travel through the Boston Government Center onto Faneuil Hall, Boston Common and the State House.

In May 1823, Mayor Josiah Quincy saw the need for a bolstered public marketplace that served the greater Boston area, so he formed a committee to find a solution to the problem. Quincy worked with property owners to acquire the required land.

The two-story Greek Revival building opened to the public in 1926. The width of 535 feet in length and 50 feet allowed 128-foot carts on the ground floor and the exhibition area on the second.

Mayor Quincy, who instigated the market and meeting place, requested not to name the marketplace after him; therefore, Faneuil Market was the official name. Though to honor the mayor, people insisted on calling the middle market “Quincy Hall.”

Today the marketplace operates as an indoor/outdoor mall and food eatery. On any given day, this vibrant district features street performers, food stalls, galleries and shops bustling with a carnival atmosphere. The festive marketplace includes three historic granite buildings: North Market, Quincy Market, and South Market. It has since come under the ownership of the Ashkenazy Corporation. 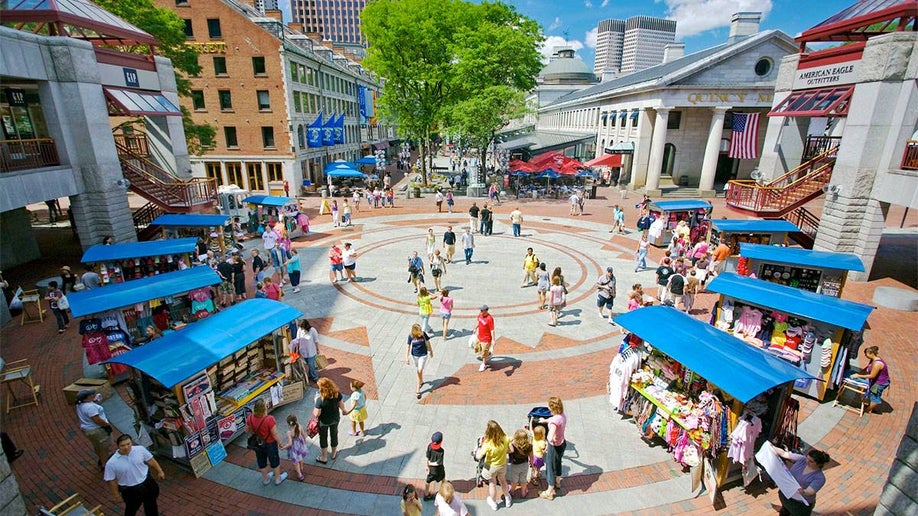 Pro Tip: The marketplace offers dog-friendly patio dining at numerous restaurants, and well-behaved leashed dogs are allowed in some stores.

Related Post: Boston on a Budget: How to Save BIG With a Go City Pass

Quincy Market sparked several knock-offs, such as the Boston Public Market and Boston’s Haymarket a few blocks away. Haymarket is one of the best farmers' markets around, but if you’re looking for a great place to eat with a wide variety of choices, you should probably head to Quincy’s.

Visitors can freely browse several food stalls or dine at the many highlighted eateries.

Other Things to Do Near Quincy Market

Boston’s renowned Freedom Trail takes visitors through 16 nationally historic sites in the city before and after the American Revolution. Local journalist William Schofield devised the 2.5-mile trail and suggested building a link to connect local landmarks. By 1953, over 40,000 people hit the path annually. Today Faneuil Hall stands in Boston’s Government Center and is a significant stop along the way. The Hall is now part of Boston’s National Historical Park and has become a U.S. National Historic Landmark.

Built in 1742, the Hall met the growing demand for a public meeting house. Merchant Peter Faneuil built the Hall with his own money. He intended the epic hall to become a center of commerce and a meeting place. On a bleaker note, some of Boston’s early slave auctions happened near Faneuil Hall.

Architects designed the Hall in the style of an English country market. The great Hall played an essential role in the politics of the American Revolution and hosted America’s first town hall meeting. Patriots like Samuel Adams and James Otis gave speeches encouraging independence from Great Britain. Americans stood on the stone steps to protest the Sugar Act, Stamp Act, and infamous Tea Acts, leading to the Boston Tea Party massacre. American colonists, frustrated with England for enforcing “taxation without representation,” dumped 342 chests of tea into the harbor, which sparked flames of war.

The Aquarium is home to thousands of aquatic animals, from northern fur seals and giant octopi to African penguins. Visitors should plan to spend about two hours exploring. The whale watch tours take three to four hours, and the IMAX films last between 35 to 45 minutes.

The Market’s surrounding area offers many options for public transportation, such as bus routes, subway systems and cabs. There are 10,724 parking garage spaces within a two-mile radius of the marketplace.

The Quincy Market and Promenade are open daily.

You can find Public Restrooms on the backside of the Quincy Market building. Enter through the CENTER doorway, and head up toward the Great Hall.