Known as the Protestant Mother Church of Hawaii for over 200 years, Oahu’s Kawaiaha`o Church is Honolulu’s national house of prayer.

Established under Queen Kuhina Nui Ka`ahumanu I in 1820, the Kawaiaha`o Church supports Hawaiian traditions, culture, and the love of God. In 1819, Oahu’s Kawaiaha`o Church developed from an original mission church founded in Boston, Massachusetts.

As a result, Missionaries hauled 14,000 coral slabs from ocean reefs to construct the “Great Stone Church.” The Kawaiaha`o Church is also known as the Westminster Abbey of the Pacific for its design. Officials named Oahu’s first Christian church a National Historic Landmark in 1962.

Located in the heart of Honolulu’s historical section, visitors can visit the church, alongside other cultural buildings, including the `lolani Palace, the King Kamehameha I Statue, the Hawaiian Mission Houses Historic Site and the Hawaiian State Capital.

Equally important, the church still functions today as a place of worship for the Hawaiian people. The church conducts services every Sunday in Hawaiian.

The historic Kawaiaha`o Church provides self-guided walking tours to help residents and tourists explore Kawaiaha`o’s rich history. The walking tour uses smartphone technology to bring the historical places of Kawaiaha`o Church to life for visitors. Guests can use the QR code reader app or camera to scan the QR codes throughout the church campus strategically. Once downloaded, users are instructed to press play to hear the description of each site as they explore the stunning church.

Fun Fact: Check the church website for the extraordinary documentary “A Witness to Aloha” about Hawaii’s first Christian Church and learn about Kawaiaha`o’s historic legacy over the past 200 years. The documentary includes interviews from Kahu Ken Makuakane, Henry Kapono, Pastor Wayne Cordeiro, Noelani Arista, and others who reveal this fascinating church’s impact on the community of Hawaii, the Pacific triangle, and the world.

In 1820, missionaries from the American Board of Commissioners for Foreign Missions established the first Christian Mission on the Island of Oahu. Reverend Hiram Bingham preached the good news and established Kawaiaha`o, which translates to “the waters of ChiefessHa`o.” Today the church stands as a testament to the Christian faith.

Seven couples joined Reverend Bingham on the Thaddeus ship for the Hawaiian Islands from the east coast. Delegates from the Park Street Church in Boston, Massachusetts, held special services to honor the brave missionaries.

Pro Tip: Church services are live-streamed with the preaching of the gospel by Kahu Kenneth Makuakane in English and deacon Dr. Ku`ipo Wong in Hawaiian. Online members are also invited to join small group meetings and receive prayer support.

Makuakane, born and raised in Hilo, Hawaii, comes from a long line of pastors. His great-great-great-grandfather was Reverend Daniel Makuakane, a renowned pastor who served the congregation from 1865 to 1873. His parents were both pastors, and his uncle, Reverend William Kaina, served churches around the islands and at Kawaiaha`o from 1984 to 1997, then his cousin Kahu Curtis took over from 2004 to 2017. On May 5, 2018, Makuakane was ordained by Kawaiaha`o Church as its 12th pastor. Makuakane, a successful singer, writer, and producer, has over 100 albums to his production credits.

Fun Fact: Reverend Makuakane produced a track on Kenny Loggins' 2000 CD release, and his music has been on the soundtrack of major films like “Honeymoon in Vegas” and “The Parent Trap.”

Makuakane has won a total of eighteen Na Hoku Hanohano Awards (the equivalent of the American Grammys.) Officials recognized him in the National Registry of Who’s Who.

An artesian well beneath the church feeds the incredible fountain on the church's Mauna (mountain) side. Church leaders brought this large lava rock from Kaimuki and set it at the spring's mouth to raise the water level to the height of a person. The fountain's origins date back to the High Chiefess Hao, who bathed in the sacred spring and gave the church its name Ka Wai a Hao, which means the water of Hao. 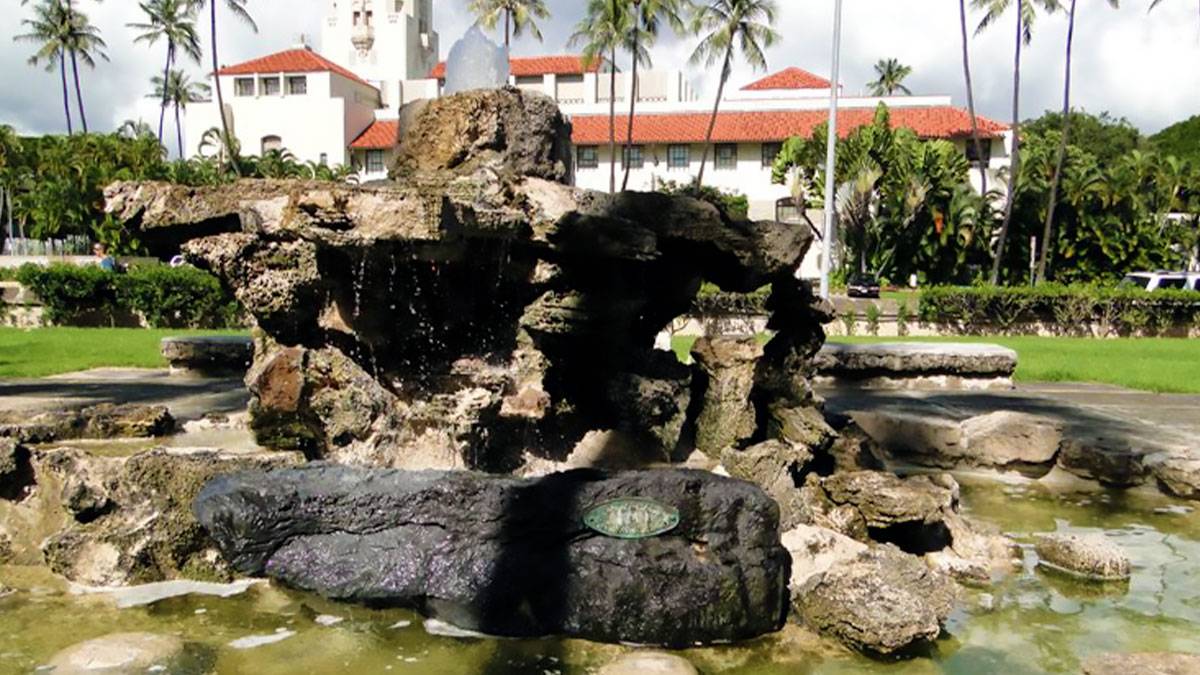 Consequently, he ruled for less than two years. His people buried the King at the church among his people rather than the Royal Mausoleum.

As guests enter the Sanctuary, a feathered staff marks the royal pews that symbolize Hawaiian royalty. The portraits on the balcony walls depict the royal Hawaiian monarchs (numbered one to 21). The church organ dates to 1964 and has 2,500 pipes. In 1925, the building underwent a grand scale restoration due to an infestation of termites. Today the church holds services in the sanctuary at 8:30 a.m. 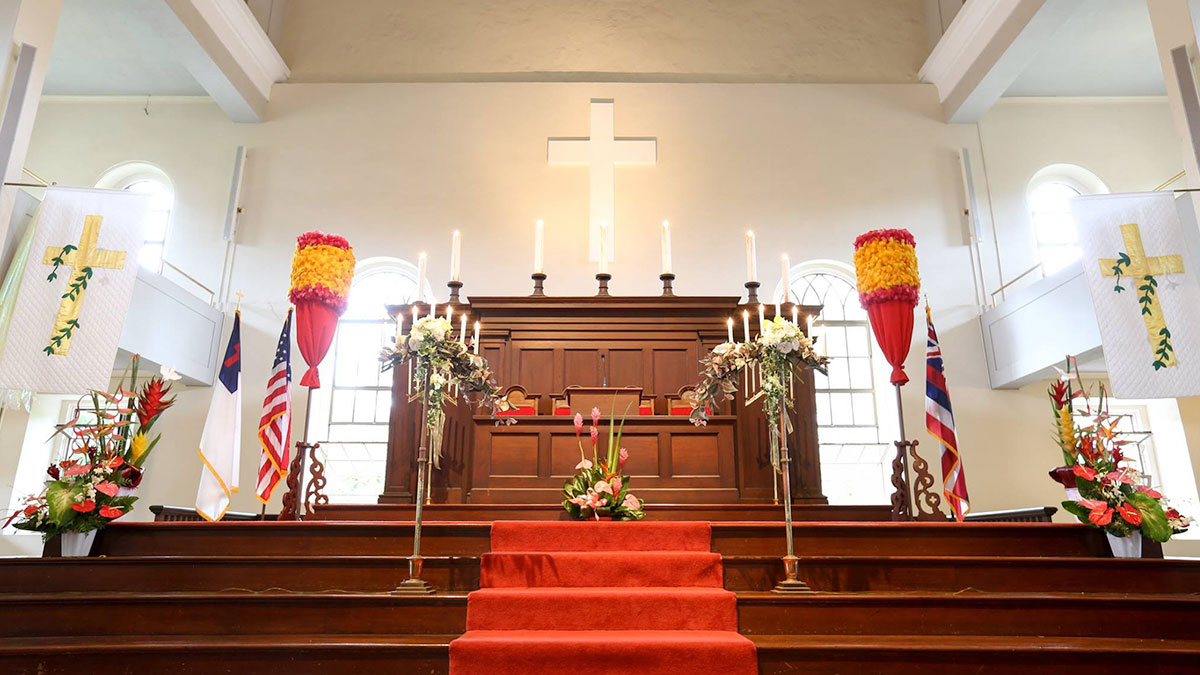 Visitors are welcome to attend the service or tour the grounds.

Related Post: Things to Do in Honolulu for Kids: A Parent's Guide

Donated by King Kamehameha III, the Howard & Davis Clock Makers in Boston, Massachusetts, made the Kauifeaouli Clock in 1850. Today the infamous clock still tolls the hours with its original machinery.

In 1899, King A.S. Cleghorn dug an artesian well and planted a lawn lined with seven royal palms. He did so as a memorial to his daughter, Princess Ka`iulani. The wrought-iron bench beside the fountain was from the princess’ home.

Known as the Protestant Mother Church of Hawaii for over 200 years, Oahu’s Kawaiaha`o…