Hoover Dam, just 30 miles southeast of Las Vegas, is the most visited dam in the world, attracting nearly a million visitors each year. The gorgeous Black Mountains and breathtaking Lake Mead surround this stunning engineering feat. This concrete arch-gravity dam on the Nevada-Arizona border cost $49 million to build.

The Hoover Dam controls flooding for the Colorado River and provides power and water to areas of the Pacific Southwest. Most of the energy generated goes to Southern California, with just over 23% allocated to Nevada.

Fun Fact: Contrary to popular belief, Las Vegas does not get most of its power from the Hoover Dam. Instead, California and Arizona get most of the Dam's power.

The nearby Mike O'Callaghan-Pat Tillman Memorial Bridge offers incredible panoramic views of the magnificent Hoover Dam, Colorado River, and Lake Mead. Visitors can drive across the bridge, and walk the bridge walkway, approximately 900 feet above the Colorado River. In addition, visitors can get from Nevada to Arizona on foot after crossing the 1,900-footbridge. 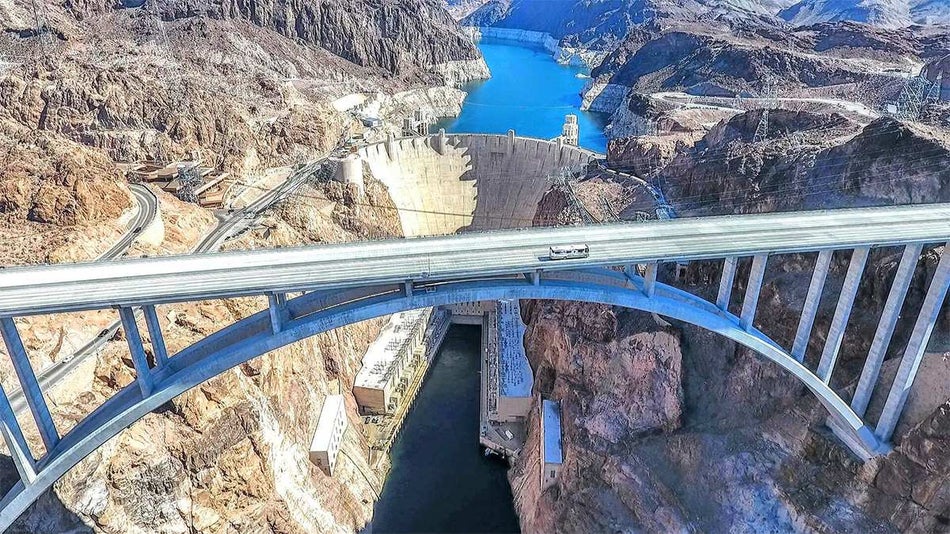 Photo Alert: The famous Nevada-Arizona line marker is a popular photo op and a great spot to check out the awe-inspiring Dam, Lake Mead, and picturesque mountain range.

The Hoover Dam is open to the public every day from 5:00 a.m. to 9:00 p.m. It costs nothing to visit the Dam, but there is a charge to take a tour and see the Visitor Center. Visitors Center admission (without access to the tours of the dam or powerplant) is $8.

Pro Tip: Stopping your vehicle on top of the Dam is prohibited during daytime or nighttime hours. Visitors can stop at the parking lots and roadway turnouts on each side of the Dam.

Dam Tour fee: $30 per person. Restrictions include: No children under the age of 8 and the tour is not accessible to those in wheelchairs or on crutches.

Power Plant Tour fee: $11 for adults ages 17-61; $9 for adults 62 and older and active U.S. military personnel (and one adult dependent); $9 for children ages 4-16; children 3 and younger are free. There are no age, height or weight restrictions on the Power Plant Tour.

Pro Tip: You cannot purchase tickets to the Dam online. Tickets are available daily in person on a first-come-first-serve basis.

This package includes historic tunnel tours and a ride on the original elevator to the top of Hoover Dam. Guests can view the Colorado River through the inspection ventilation shaft. The extended package also features a guided Powerplant Tour and a Self-Guided Visitor Center Tour.

This package includes a walk through the original construction tunnels and the viewing platform overlook, which features a 30-foot diameter penstock. Guests can feel the vibration created by the rushing water through the pipes. On this tour, eight commercial generators are visible in the Nevada Powerhouse. A Self-Guide Visitor Center Tour is included in this package.

This narrated exhibit offers insight into Hoover Dam's construction and history with a narrated 3D model of the region's dams and power systems.

From the observation deck, visitors can enjoy a 360-degree view of the Dam, Colorado River, Lake Mead, and Hoover Bypass Bridge. In addition, there is a gift shop and café located in the Visitor Center.

The Hoover Dam's parking garage, on the Nevada side, charges $10 per vehicle and is the most convenient parking option. Parking is $7 at the garage across from the visitors center. There are also several parking lots on the Arizona side, and if demand is low, the lots may be free of charge. Additional free parking is available up the hill.

Pro Tip: Oversized vehicles must park on the Arizona side.

Related Post: 15 of the Best Things to Do in Las Vegas Besides Gamble

The U.S. Bureau of Reclamation devised a massive dam on the Arizona-Nevada border to tame the Colorado River and provide water and hydroelectric power for the developing Southwest. Engineer Frank Crowe worked on the Dam for over 20 years, historically changing the landscape of the west. 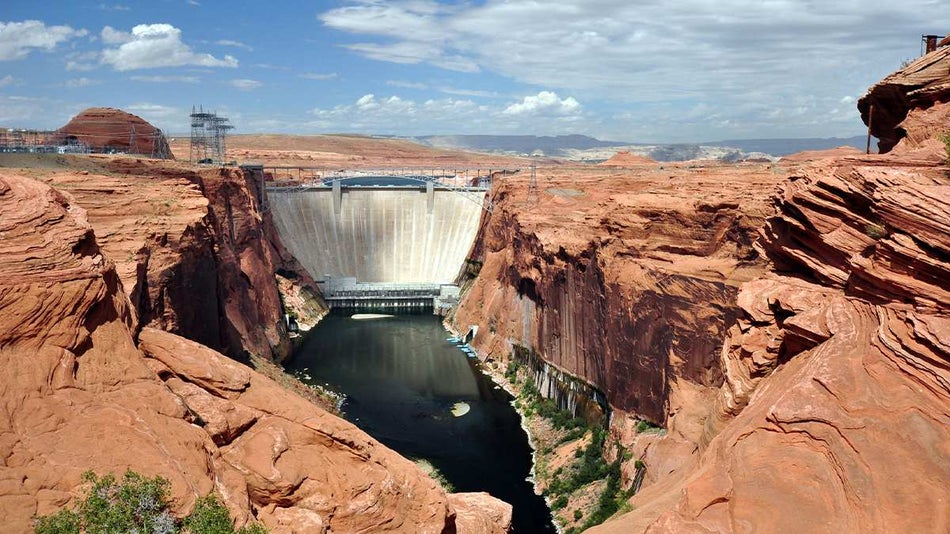 Designed by architect Gordon Kaufmann, construction began in September 1930. The Dam's namesake, President Herbert Hoover, initiated the Boulder Canyon Project Act, with plans for a dam to be built in Black Canyon. Proposals included a reservoir and hydroelectric power plant. Before the Dam, flooding was damaging areas of the Imperial and Palo Verde Valleys.

Related Post: 9 Day Trips from Las Vegas Worth the Drive

The Dam's completion took five years, finishing in 1935. Unfortunately, 96 people lost their lives during the construction, as they were struck by falling debris, blasting, or drowning.

The Dam's name was controversial since many still blamed Hoover for the Great Depression. People went back and forth, calling it the Boulder Dam. It wasn't until 1947 President Harry Truman officially confirmed the Dam would carry Hoover's name.

Over 5,000 workers moved to the area with the Dam's construction, creating a small city of Hoover Dam employees. The site had no elected officials and was run by the U.S. Bureau of Reclamation. City officials banned the use of alcohol and gambling.

The Dam's formation enabled the creation of Lake Mead, the nation's largest reservoir, holding more than 28.9 million acre-feet of water. Unfortunately, the process flooded a nearby community of St. Thomas, Nevada, rendering it a ghost town. Today the reservoir supplies water to 25 million people in Nevada, Arizona, and California. The recreational lake is also popular for boating, swimming, and fishing.

Related Post: 2022 Guide to Spring Break in Las Vegas: Where to Go & Where to Party

Fun Fact: It would be tough to damage Hoover Dam with an earthquake of any possible magnitude.

Built during the Great Depression, the great Dam was finished during President Franklin D. Roosevelt's term in 1935. Upon completion, at 700 feet tall, it was the highest Dam in the world. The National Historic Landmark is named one of the top 10 Construction Achievements of the 20th century, producing over four billion kilowatts of electricity a year. It's one of the U.S.'s largest hydroelectric power facilities with 17 generators.

Fun Fact: During WWII, Hoover Dam was the target of a German bomb plot. Hitler wanted to plant bombs at the intake towers to sabotage the power supply to Southern California's aviation manufacturing industry. As a result, officials closed the Dam to the public during this time.

Hoover Dam, just 30 miles southeast of Las Vegas, is the most visited dam in the world,…