One of the Big Apple's top tourist attractions, New York's Central Park hosts 42 million visitors annually, and with 843-acres to cover, it is one of the world's largest parks!

For over 150 years, Central Park has been NYC's green oasis. Both tourists and locals alike have found refuge in the sprawling garden playground that is one of the world's most photographed and filmed urban parks.

The park is open at 6:00 a.m. and closes at 1:00 a.m. Admittance to Central Park and the Belvedere Castle is free, but there is a fee to enter the zoo. The use of alcohol and forms of smoking, including electronic cigarettes, is not permitted in Central Park. Swimming in the reservoir is also illegal, but there is still plenty to do!

Pro Tip: You should plan on a minimum of six hours to complete your Central Park visit. Depending on how many breaks you take, you will walk between seven to nine miles. Experts recommend starting in the southeast corner by the pond. 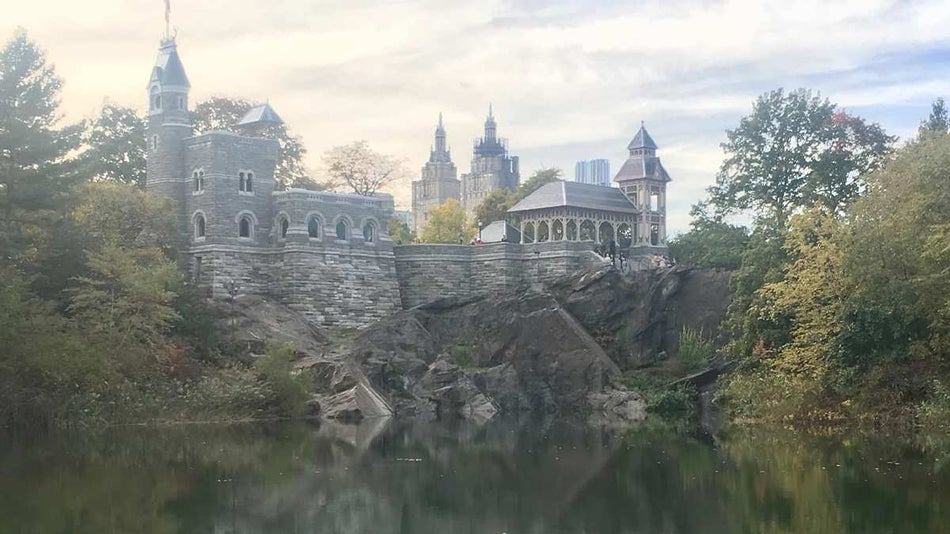 Since 1919, this magnificent structure has drawn tourists far and wide. In addition to the numerous exhibit rooms, the observation deck offers stunning vistas of the park’s Turtle Pond, Ramble, and Delacorte Theater.

Named for the structure’s similarity to an archer’s bow, the Bow Bridge was the invention of park architects Calvert Vaux and Jacob Wry Mould. The style resembles classic Greek and Renaissance compositions.

Fun Fact: Several movies such as Spiderman 3, Elf, The Way We Were, and Enchanted have memorable scenes on this iconic bridge.

Near 72nd Street, this site features two of Central Park’s most beautiful architectural designs. The terrace has a hand-tiled ceiling and two grand stairways that lead up to the fountain.

Fun Fact: At 26 feet high, this fountain is one of the tallest in New York and is considered the heart of the city.

In 1873 architect Emma Stebbins designed the renowned Angel of Waters sculpture on top of the fountain. Stebbins was the first woman to receive a commission for a major public work in New York City.

Pro Tip: Don’t waste your time searching for the iconic Friends’ fountain from the show’s opening credits. The scene was filmed on a Warner Brothers backlot in Burbank, California, though the spot often gets mistaken for Central Park’s Cherry Hill Fountain.

This six-acre site has three beautiful European-style French, Italian, and English designed gardens. With several fountains and paths, it’s a great spot to relax or share a picnic with friends. The nearby Model Boat Pond, situated on the park's eastern side, is an excellent place for model boat sailing and racing.

This famous bronzed statue stands 11 feet tall at the northern end of Conservatory Water. Built in 1959 by artist Jose de Creeft, for the sole purpose of children's enjoyment, the statue allows kids to climb on top and experience the wonder of Lewis Carroll’s classic book.

With over 100 animals from various world regions, this zoo packs a full day’s worth of entertainment. Featuring different climate sections, visitors and see an equatorial rainforest with tropical birds and monkeys as well as an Artic area with rare snow leopards and polar bears.

This famous memorial is dedicated to musician John Lennon, who was murdered by a deranged fan on the western side of the park. The area features a mosaic path and plaque that bears the inscription of the word ‘Imagine.”

Designed by architects Frederick Law Olmsted and Calver Vaux, Central Park is considered a masterpiece of landscape architecture. The world-famous park addressed the recreational needs of the rapidly growing urban city. New York City’s largest urban park became a National History Landscape in 1963 and Scenic Landscape of the City of New York in 1974.

Related Post: New York on a Budget: How to Save BIG With a Go City Pass

The park first opened to the public in 1859, when thousands of New Yorkers skated on lakes constructed on the site of former swamps. By 1865 the park gained more than seven million visitors a year.

During Central Park's construction, workers built over 36 bridges, 11 overpasses and planted more than 500,000 trees and bushes. They also moved over five million cubic yards of stone, earth, and topsoil.

It took over 15 years to complete construction and cost $14 million but was hailed a triumph upon completion. The construction led the way to create every U.S. urban park since.

In the heart of Manhattan, the predominant green space resides as a magnificent repose for weary New Yorkers and tourists to experience the sprawling rural beauty.

Central Park hosts numerous events and pursuits from boating, running, hiking, tennis, and bird watching. And best of all, most of them are free!

Picnicking on the Great Lawn

Plan a picnic along the 55-acre stretch called the Great Lawn, a popular concert area and iconic spot for numerous motion pictures.

Related Post: When is the Best Time to Visit New York City?

Hike the famous Ramble for some bird watching

This quiet 36-acre woodland is a dense forest with many paths, lakes, streams, and over 230 bird species.

Stop for lunch at the famed Loeb Boathouse Restaurant

The outdoor seating offers a beautiful lake view while enjoying a delicious meal and drink. Visitors can also rent a boat on the lake for an hour of meditation and relaxation.

Take the 1.5 Loop Trail around the Jacqueline Kennedy Onassis Reservoir

In 1994, this body of water was renamed in honor of the late Jacqueline Kennedy Onassis for her contributions to the city. The loop trail is a year-round favorite for runners.

This iconic elm-lined promenade leads directly to the Bethesda Fountain. Close to the Mall is the Literary Walk that hosts statues of famous writers such as Robert Burns, Sir Walter Scot, and William Shakespeare.

Feel like a little Shakespeare in the park? This theater hosts free performances from some of the city’s most talented actors.

Visitors can rent skates on-site for an exciting ice adventure from October to April.

Biking is a much faster way to see all Central Park’s glory. With miles of trails to travel and picturesque bridges to cross – renting a bike can be your best bet. In addition to bike rentals, Bike Rental Central Park offers guided tours of both Central Park and New York City.

Pro Tip: The Central Park guided tour takes you through seven miles of more than 150 Hollywood movie sites in just two hours, making this activity one of the most interesting attractions.