Calling all superhero fans! Tour NYC and see locations used in your favorite superhero films. From Batman to Jessica Jones, the Avengers to Spider-Man, you’ll get a behind-the-scenes look at 40 film backdrops throughout the city from the comfort of a heated/air-conditioned bus. Bring your camera, grab your cape, and prepare for the most epic tour of New York City!

from The Superhero Tour of NYC
Take this tour to see where your favorite comic book heroes from The Avengers, Spider-Man, Batman, Superman, Jessica Jones, and more saved the day. This is a one-of-a-kind experience for comic book lovers, young and old. Whether you’re a Comic-Con regular or a casual fan, this tour will give you a behind-the-scenes look at many of the most amazing, fantastic, and incredible adventures on screen and from the comics:

• Visit the heart of New York City featured in Captain America: The First Avenger, The Amazing Spider-Man 2 and Heroes
• Step into Clark Kent’s shoes at the Daily Planet in the Superman franchise
• Relive the Battle of New York along Park Avenue from The Avengers
• Swing by the Daily Bugle office building from Spider-Man
• Take a picture where Danny Rand flips over a cab in Iron Fist
• Go on location to the New York Stock Exchange where Batman fights Bane in The Dark Knight Rises
• Drive by City Hall and its famous courthouses, seen in Daredevil and Jessica Jones
• See the Statue of Liberty, featured in X-Men and Superman: The Movie (Tickets to the Statue not included)

On this guided sightseeing bus tour you will see over 40 NYC locations featured in your favorite super-powered TV shows and movies, all from the comfort of an indoor bus with heat in the winter and AC in the summer. So put on your capes and grab your shield as your tour guide leads you through the most filmed city in the world. This bus tour will run faster than a speeding bullet every Friday and Saturday at noon. 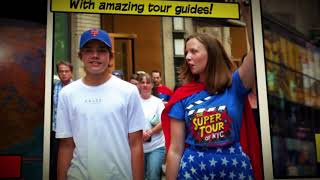 Have you been to The Superhero Tour of NYC? Share your knowledge and be the first to review this.
Write a Review
Back to Top

Frequently Asked Questions about The Superhero Tour of NYC

How long is the tour?
The tour is approximately 3 hours long.

Do tours operate on a specific day?
Yes. Tours are available on Fridays and Saturdays at 12:00 pm.

Does the tour include any walking?
Yes. There is a short walk at the beginning before boarding the bus for the remainder of the tour.

Where do I meet for the tour?
Tours meet at 200 West 40th Street, in front of Midtown Comics.

Is there assigned seating on the bus?
Seating is first come, first serve with the exception of those who purchase priority seating. If you have a number of people in your party that want to sit together, you should make sure to arrive 15-20 minutes early. Guests that arrive late or right at the starting time are much more likely to have to split up their group.

Can I take pictures on the tour?
Yes. While photography and filming are not allowed on the bus portion of the tour, there are great spots for taking photos and videos at stops along the way. You may take photos out the window at the various locations your guide is highlighting.

Are gratuities included in the tour price?
No. A tip for great service is always appreciated, but never required.

Does the tour include food and drinks?
No. Guests are allowed to bring food and drinks on the tour bus, but are required to remove all trash after the tour. Alcohol is completely prohibited on the bus.

Are the coach buses wheelchair accessible?
Yes. However, please make note of your request for an accessible bus when booking in the “Have Special Needs?” field.

Buses are not equipped with lap or shoulder belts or harnesses. Notice of the need for an accessible vehicle at least 24 hours in advance is strongly recommended so as to guarantee the timely provision of an accessible vehicle. The wheelchair lifts can accommodate up to approximately 600 pounds total. However, if you will be using a fold-up wheelchair and will be traveling with someone who can provide assistance on and off the bus, you do not need to inform us ahead of time as all of our buses have room in the luggage compartment to store it.

Can I bring a stroller or luggage on the bus?
The tour is conducted on a coach bus, so limited storage space is available. Please keep in mind that there will be several stops of up to 15-20 minutes each where guests and tour guides leave the bus. If you are not comfortable leaving your belongings on the bus during this time, you might want to reconsider bringing them.

Is this tour appropriate for kids?
Yes. Kids ages 1-5 are free, but are not guaranteed a seat. If the bus is full they may have to sit on a lap.

Can we come dressed as our favorite superhero?
Absolutely.