Grab your Marauder's map, dust off your broomstick, and solemnly swear you are up to no good. While your Harry Potter dreams might contain fantasies of Jolly Old England, true Potterheads know the magic of Hogwarts, Hogsmeade, and more lies in Orlando, Florida!

Follow along as we take you through our top 12 Must-Sees at the Wizarding World of Harry Potter.

From death-defying adventures with dragons at Gringotts to casting spells with your bespoke wand, there are untold ways to experience the thrill of Harry's theme park.

Don, your favorite robe, fuel up on chocolate frogs, and prepare to be reunited with Harry, Hermoine, and Ron. Whether you are a loyal fan of the book series or can't help but watch the Warner bros movies on repeat, you're guaranteed to have an enchanted time in the Wizarding World of Harry Potter.

About the Wizarding World of Harry Potter

Ready to climb aboard the Hogwarts Express or perhaps even play a pickup game of Quidditch? Eager wizards and witches should sit tight. To experience the full magic of the Wizarding World of Harry Potter, they will need to have pre-purchased tickets to Universal Orlando Resort.

This will ensure you can experience the full spectrum of Harry Potter-themed attractions, roller coasters, and retail shops allocated at both parks.

However, we think half the fun of Harry Potter world is traveling from park to park via the Hogwarts Express.

First things first! Kick off your day of spells, snitches, and more with an incredible journey with the Hogwarts Express. More than just a convenient mode of transportation, this thoroughly immersive ride is a perfect introduction to the beloved characters of the Harry Potter universe.

The Hogwarts Express provides passage from King's Cross Station in the London area of Universal Studios Florida to the Hogsmeade™ Station in Universal's Islands of Adventure. Each direction serves a unique experience, so be sure to ride the old-school locomotive in both directions.

Peek out your window, as you'll want to glimpse at the familiar faces zooming by, and don't forget to try walking through Platform 9 ¾!

Muster up all of that Gryffindor courage as our next must-see stop will whisk you away to one of the darker corners of the Wizarding world.

Knockturn Alley is known as the hangout for seedier and more sordid types of wizards. Cobblestone streets and mysterious artifacts abound there. Nonetheless, our favorite way to soak in the atmosphere of this spooky spot is with a stop at Borgin and Burkes. Crammed full of skulls, gruesome collectibles, and Death Eater masks, this notorious shop will send shivers up your spine.

Keep your eyes peeled for real Harry Potter movie props, and perhaps even pick up a unique souvenir for the dark witch or wizard in your life. 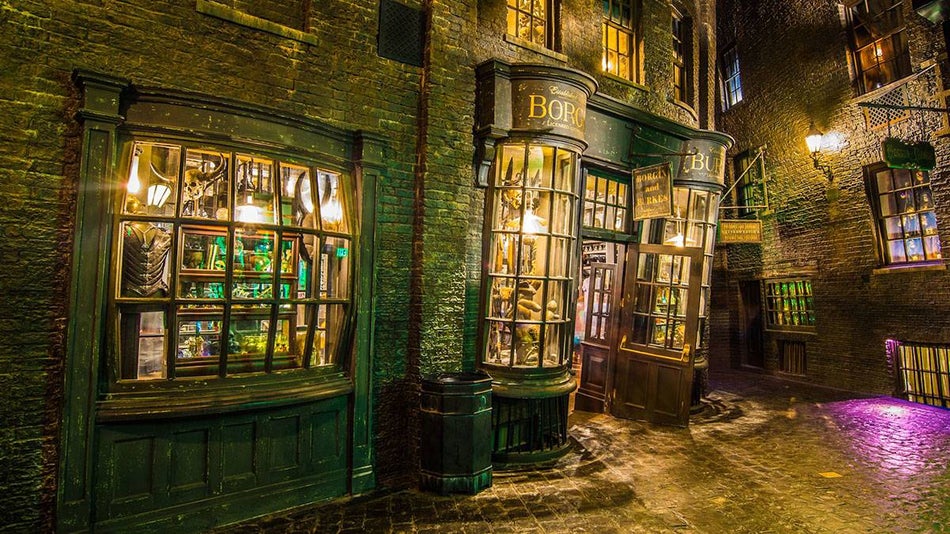 Have a pint at the Leaky Cauldron

Feeling peckish? Satisfy that craving for Bangers and Mash, or marvel at the unrivaled pub atmosphere when you visit the Leaky Cauldron.

A larger replica of the famed eatery from the movies, this establishment's vintage candelabra, cathedral ceilings, and delicious grub are sure to please. Menu standouts include roasted English sausage served with creamy mashed potatoes and gravy and the Fisherman's Pie, Toad in the Hole, and Ploughman's Platter.

Tiny tots can also assuage their hunger with a mini pie order from the kid's menu, while adults can sample a Wizard's brew (special draught beer).

Ride the Flight of the Hippogriff

Get reunited with everyone's favorite half-giant when you strap in for a spin on this family-friendly roller coaster. Located in the Hogsmeade section of the park, the Flight of the Hippogriff is a cruisy ride through Hagrid's flourishing pumpkin patch and hut.

Try to dredge up that care of magical creatures' knowledge as you attempt to approach a majestic Hippogriff. Heed Hagrid's advice as you won't want to get on the wrong side of this part eagle, part horse beast! Chock full of dynamic twists, turns, and spins, this fun-filled ride also features an appearance by Fang, Hagrid's guard dog. 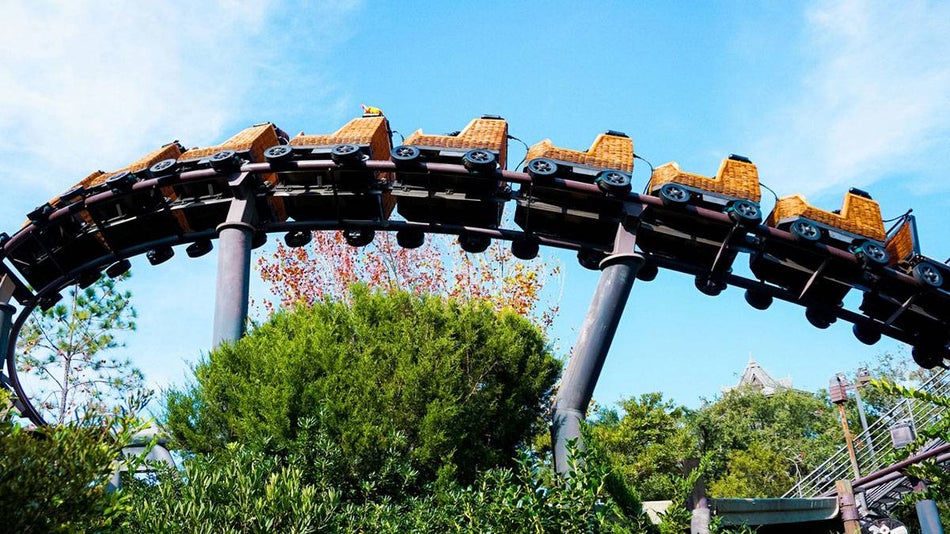 Snap a selfie with the Knight Bus

The Wizarding World of Harry Potter might offer endless opportunities for incredible selfies, but we are partial to the iconic lavender Knight Bus. A safe oasis for stranded witches and wizards, this massive triple-decker bus is located in the London area of Universal, just outside Diagon Alley.

Strike up a conversation with the bus attendant Stan Shunpike, stare in awe at the shrunken head, and score some silly pictures. Then, take a gander inside the bus's windows and spy the curtains, beds, and ornate chandeliers that provide comfort to weary wizards.

Fun Fact: The Knight Bus at Universal is one of the two actual prop buses used in the film Harry Potter and The Prisoner of Azkaban.

Check out the goods at Weasley's Wizard Wheezes

Dive into the shenanigans of the devilishly clever and chaotic Weasley twins when you spend some well-earned galleons at their shop in Diagon Alley. Weasley's Wizard Wheezes is a tribute to the ingenuity and impeccable comic timing of these ginger-haired jokesters.

This brightly colored novelty joke shop is the ideal locale to birth your next boisterous prank or practical joke. Stock up on toys and tidbits, including Pygmy Puffs, U-No-Poo pills, Skiving Snack boxes, Puking Pastilles, and more.

Hankering for some high-speed exhilaration and 4D simulation? Queue up for one of the best rides in all of the Wizarding World when you hightail it to Hogsmeade for Harry Potter and the Forbidden Journey. This adrenaline-pumping 'robocoaster' is not for the faint of heart.

And even features appearances by some of the most feared Forbidden Forest foes. Come toe to toe with Aragog and soar above Hogwarts Castle as you embrace this one-of-a-kind ride. Located within the Castle, this attraction's ample wait time is even fun, as you can check out moving portraits, Dumbledore's office digs, and holograms of Harry, Ron, and Hermoine.

Fun Fact: Even if your tummy can't handle the extreme motion of the ride, you can queue for the rollercoaster to experience the amazing Hogwart's interior. 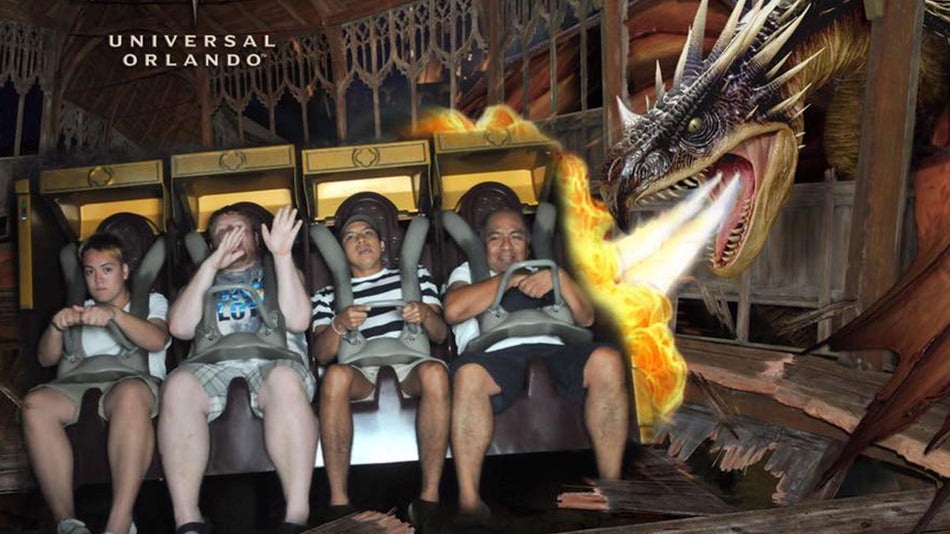 Escape from Gringotts and Exchange Money

Crystal chandeliers, marble hallowed halls, and plenty of cantankerous goblins await those brave or foolish enough to Escape from Gringotts. But, fire-breathing dragons may be the least of your worries as you travel deep underground to penetrate the treasure-filled subterranean vaults of Gringotts.

This infamous wizarding bank is known for its high security. You'll have to use every last wit and witchy spell to evade the clutches of Voldemort, Bellatrix, trolls, and more. Post dungeon adventure, catch your breath and pull out some cash. Ask the wizened Gringotts goblin's a question, and even trade US dollars for real Gringotts banknotes.

Related Post: 10 of the Best Things to Do in Orlando for Couples

This magical currency can then be used for purchases within Diagon Alley, Hogsmeade, and select locations throughout Universal Orlando Resort.

Centaurs, Scroots, and Three-Headed Dogs, oh my! You may have been warned to avoid the Forbidden Forest after dark, but this winding and windswept ride will plunge you into a pack of magical creatures.

Follow along with Hagrid as you set forth on a spine-tingling Magical Creatures Motorbike Adventure. Opt to ride in the motorbike or the sidecar. You'll reach dizzying speeds and drops of up to 50 mph. Avoid the clutches of Fluffy and watch out for Thestrals as you hold tight on this action-packed getaway. 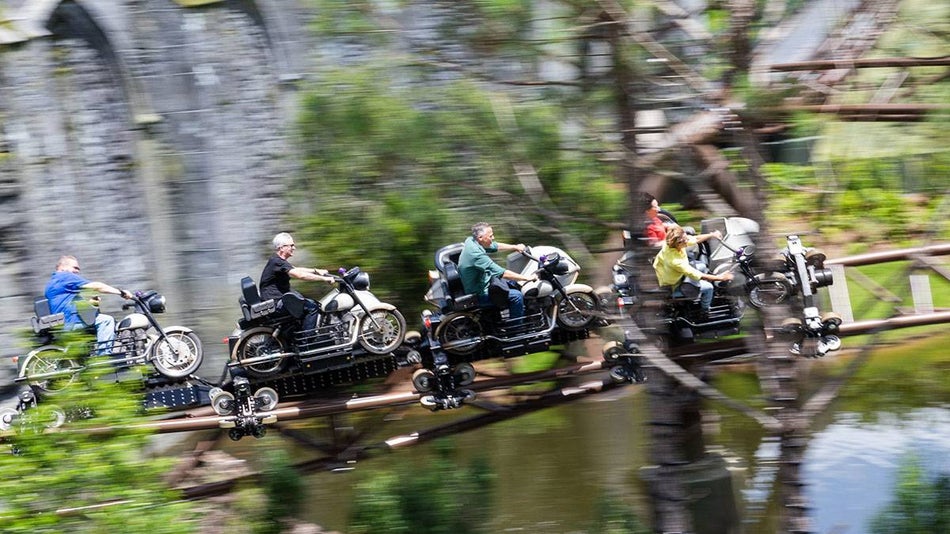 Wave a wand at Ollivanders

Have you been practicing your wand flick and 'Expelliarmus' pronunciation? No trip to the Wizarding World is complete without a bit of spell casting. We highly suggest stopping by either location of Ollivanders (there is one in both parks) and partaking in an interactive wand experience.

Watch the magic unfold as an Ollivanders employee aids an unsuspecting witch or wizard to find their wand. As Ollivander always says, "It's the wand that chooses the wizard!" Those lucky enough to purchase their own wand will be able to swish and flick the day away. These mystical sticks allow you to cast spells throughout Diagon Alley and Hogsmeade.

Scope out souvenirs at Wiseacre Wizarding Equipment and Dervish and Banges

Still haven't had your fill of Wizarding souvenirs? Whiz on by the azure facade of Wiseacre's Wizarding Equipment. You'll be able to stock up on all essential wizarding supplies and wares. Represent your Hogwarts House with pride when you purchase a Gryffindor or Slytherin t-shirt.

More of the athletic type? Swing by Hogsmeade and outfit your favorite seeker for Quidditch season when you shop at Dervish and Banges.

Pretend you're playing the Quidditch World Cup and pile your cart high with Quaffles, Golden Snitches, and elite brooms, including the Nimbus Two Thousand and One and the Firebolt.

Related Post: 12 of the Best Things to Do in Orlando with Teenagers

Sip on an ice-cold Butterbeer

Before you depart back to your Muggle world, end your day on a sweet note with a deliciously creamy Butterbeer.

A favorite beverage of Harry and Ron, Butterbeer is the one delicious park indulgence you must make time for. Despite its moniker, Butterbeer is entirely non-alcoholic. Instead, it's more reminiscent of sweet butterscotch or cream-flavored soda.

Luckily Butterbeer beverages can be found throughout both parks in various forms. We are partial to a frozen Butterbeer from the Leaky Cauldron or Three Broomsticks. You can also sip on piping hot versions.

Want an even more decadent treat? Help yourself to some Butterbeer ice cream at Florean Fortescue's Ice-Cream Parlour, the Hopping Pot, or the Three Broomsticks. 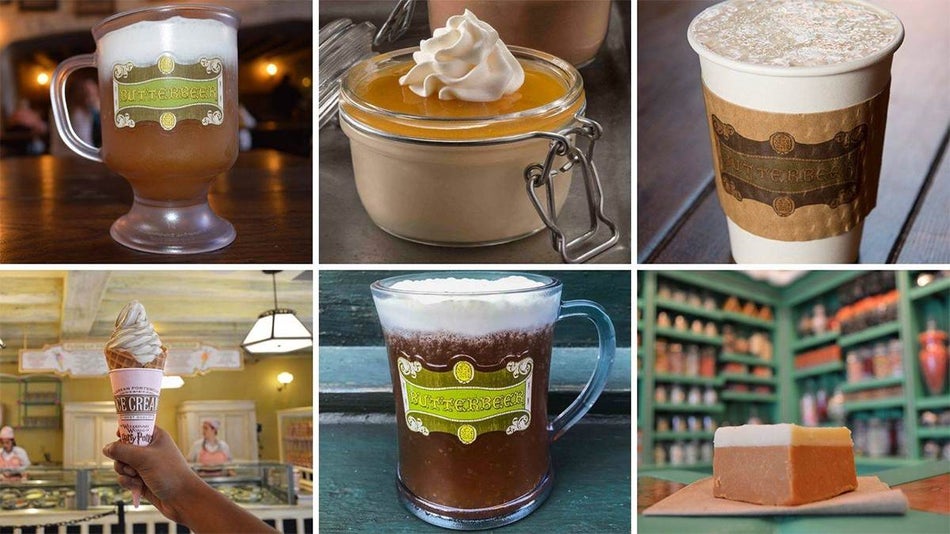 Whether you have been a loyal Harry Potter reader since the books' debut in 1997 or only, know Harry, Ron, and Hermoine as players on the silver screen.

J.K. Rowling's world of mystery and magic holds eternal appeal. Immerse yourself in the characters, catastrophes, and attractions when you visit the Wizarding World of Harry Potter.

From the soaring swoops and spins above the Forbidden Forest to heart-pounding encounters with Death Eaters and dragons. A day at Universal Orlando is not to be missed.

Chow down on Ploughman's Platter, chat with a shrunken head, or prepare your trolley for the Hogwarts Express.

Don't waste another moment in your muggle world! Plan your trip to platform 9 ¾ today!