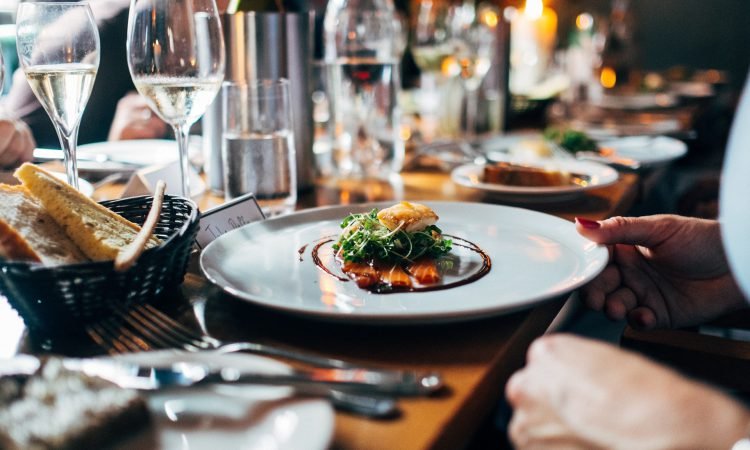 New York City’s restaurant scene in the Theater District has exploded in the past few years, with new dining spots springing up left and right. However, it can be difficult to find a great pre-theater meal around Times Square and the Theater District. Prices tend to be high and some restaurants are super touristy. As a result, it’s best to look off the beaten path.

You’ll find plenty of bargains and a variety of top-notch restaurants from contemporary to classic. An array of tasty cuisine can be found in the New York City Theater District but it can be hard to decide where to eat before a Broadway show. With our guide, you’ll know where to go to enjoy a fantastic meal before you bask in the bright lights of Broadway.

This is one of the more reasonably priced American-cuisine restaurants right in the heart of the Theater District. Joe Allen has been serving great food to Broadway performers, theatergoers and tourists for over 50 years. In addition, this lovely restaurant is just two blocks from Times Square. As a result, it’s a great place to get a good, well-rounded meal when you’re being a tourist.

Joe Allen isn’t a glitzy restaurant and the menu is not very large or exotic. However, there is something for everyone. Try the marinated grilled chicken with mashed potatoes. It’s outstanding! While you enjoy the food, you can ogle the old Broadway posters on the walls. The restaurant is known for its “Posters of Broadway Bombs.” Reservations are necessary.

If you’re in the mood for one of the best pizzas in New York City, stop at Don Antonio’s. It’s as good as it gets! Opened in 2012, the restaurant offers a classic, creative Neapolitan-style pizza. The cheese and sauce on their pies are fresh, and the crusts of their Pizza Fritta, which is filled with cherry tomatoes, homemade mozzarella, fresh ricotta, and salami, are slightly fried until lightly crisped and puffy.

The menu ranges from classics like the margherita to slightly more unique concoctions featuring toppings like truffle cream, pistachio pesto, and fresh ricotta. Vegetarian options are also available. On the weekends, the restaurant is open from 11:30 a.m. straight through dinner; on weekdays, it’s closed for an hour between 3:30 and 4:30 p.m. You don’t need reservations, but show up with a little time to spare.

When discussing where to eat before a Broadway show, you can’t overlook Toloache. A contemporary Mexican Bistro, Toloache opened in 2007 in the Theater District. It offers a wide selection of Mexican food plus an extensive vegetarian menu. The appetizers and entrees feature ceviches, tacos, oyster shooters and ribs. In addition, three versions of guacamole are served. There is plain, a fairly traditional mixture of roughly mashed avocado with some onion and Serrano chilies, a small dice of tomatoes and a sprinkling of cilantro lives. A fierier recipe offers chipotle and more tomatoes, a hint of queso fresco, and some red onions. It’s all delicious!

Toloache isn’t a fancy restaurant. However, the fact that its always packed should tell you something. The food, great service, and a colorful, vibrant atmosphere create a one-of-a-kind dining experience. Early reservations are a must.

Just east of the Theater District, between the Avenue of the Americas and 5th Ave. Midtown West, this stylish French-American eatery is a quick stroll from any theater below West 50th Street. In addition, it gets you away from the hustle and bustle of Times Square. This classic New York City diner offers a calm, modern ambiance.  Try the famed D/B burger with short ribs, foie gras, and a black truffle-parmesan bun. It’s a legendary local favorite.

The quaint 36-seat Danji restaurant serves upscale, creative Korean small plates bursting with flavor. As a result, it’s one of the most popular places to eat near the Theater District. Unfortunately, Danji doesn’t take reservations for groups smaller than six. With that in mind, be sure to arrive early in order to get a table.

Unassuming and totally casual, this is where to eat before a Broadway show if you’re looking for fantastic food without the dress code. Try the garlic honey wings, bulgogi beef sliders or spicy yellowtail sashimi. They’re all so good!

Bar Centrale is where to eat before a Broadway show to experience a hip yet laidback vibe. As this location is a converted apartment, coming here almost feels like visiting a friend’s place. But with better food and drinks. Famous people also tend to visit Bar Centrale, so act cool and don’t be that guy.

When you dine at Bar Centrale, small plates are the main focus. We recommend ordering several to share. You can’t go wrong with the lobster quesadillas, lamb shawarma, or baja style fish tacos. The cocktails here are also top-notch, including classic drinks presented in modern ways. Try the Manhattan, Martini or Sidecar.

It’s also important to pay attention to Bar Centrale’s address. This discreet, speakeasy-style bar, located between Orso and Joe Allen’s, is only identifiable by the number (324) on its door. Reservations are needed and are taken one week in advance.

We’re not going to lie–dining at Sushi of Gari isn’t a cheap pre-dinner meal. But, it is some of the best sushi in New York City. There are four locations in the city. However, Sushi of Gari 46 is the ideal location for where to eat before a Broadway show.

Helmed by owner and chef Mastoshi “Gari” Sugio, the creative sushi served here comes with sauces and toppings perfectly chosen by Gari. This is in an effort to dissuade patrons from overusing soy sauce, instead focusing on the flavor of the fish, rice and other ingredients.

During your pre-show meal, we highly recommend trying the Omakase. It’s the signature sample of “Sushi of Gari,” featuring the originally created seasonal items of the day. In addition, the Gyoza (pan-fried dumplings), Tempura, and other sushi rolls like Eel & Avocado and Spicy Tuna Rill are excellent options. Be sure to sit at the sushi counter to get the full Sushi of Gari experience.

If you’re in the mood to eat classic Italian food before seeing a Broadway show, this spot is for you. The bustling atmosphere is surprisingly inviting while the affordability of the menu is attractive t many theater-goers. On top of that, the food the service is expedient and friendly so you can rest assured you’ll be on time for your show.

As far as what to order, this restaurant specializes in classics like lasagna, ravioli, and veal. However, they’re also known for their delicious black linguini. Of course, if you’re dining as the Italians do, you’ll have to order a pasta dish and an entree. Recommended entrees include the Scarpariello (chicken breast with sauteed with sweet Italian sausage) and the Veal Martini ( parmesan-crusted veal cutlets.) Save room for dessert, though. The tiramisu is to die for!

Don’t let the name of this establishment fool you–it’s much more than a wine bar. Ran by the same group as Le Bernardin (also an excellent place to eat before a Broadway show if your budget allows), the atmosphere is casual yet trendy and the food. Plus, the wine list is surprisingly budget-conscious.

The relaxed approach to good food and good wine easily creates a good time. As a result, Aldo Sohm is an ideal place to go pre-show for upscale food with a low key vibe. Inspired by French fare, highlights of the small plates menu include the grilled foie gras lollipop, truffle pasta, and goat cheese potato parfait.

Now that you know where to eat before a Broadway show, you’re all set for a great night in NYC. Whether you’re looking for a three-course meal or lighter fare, the options in the New York City’s theater district will be sure to please your palate. Keep in mind, it’s always best to make reservations when available. And, plan on allowing two hours for your meal time. This will ensure you have plenty of time to enjoy yourself and arrive on time for your show.