Your 2022 Guide to Kid-Friendly Shows on Broadway in NYC

The gentle hum of a full orchestra warming up, the quiet thrill of anticipation that passes through the crowd just before curtain call, and the excitement of being handed your very own Playbill.

These are the special moments that are genuinely unique to Broadway.

Nothing brings more joy and happiness to a child's face than witnessing the magic of their very first Broadway musical. With the Great White Way coming back, there's never been a better time to introduce your children to the wonder of live theater.

From the sweltering plains of the Serengeti in Africa to the wacky world of Oz, there are innumerable universes of enchantment and imagination to explore on Broadway.

Experience a 'whole new world' with Aladdin. Or, engage in all the Yuletide and nativity festivities with the world-famous Rockettes. From A-Z we have the inside scoop on everything you need to know about kid-friendly Broadway.

What You Need to Know

We are just overjoyed that after an 18-month hiatus, the sparkling lights of Broadway will be shining again.

Of course, safety is everyone's primary concern, and the entire musical theater community is working hard to make Broadway's return as smooth and simple as possible.

In order to experience the pleasure of a Broadway production, you will need to:

You could easily spend an entire New York City vacation solely soaking up the best theatrical productions in the world. However, there are countless ways to explore the art, culture, and history of the city that never sleeps.

Extend your time in the metropolis of Manhattan by booking any number of our premier options for New York City Hotels. Sleep soundly in the theater district, or enjoy luxury amenities in Tribeca, knowing you're guaranteed our lowest available rates.

A love letter to the African Pride Lands, The Lion King is an exhilarating adventure of jaw-dropping visuals, vibrant costumes, jubilant songs, and intricate choreography.

From the instantly recognizable tribal calls of the opening number, the Circle of Life, to the breathtaking set design that will instantly transport you to the plains of Africa, the Lion King clutches you in its claws and doesn't let go.

A universally beloved story based on the 1994 animated Disney movie, The Lion King, tells the tale of young Simba and his quest for love, friendship, family, and redemption.

Little ones of all ages will not believe their eyes as they witness giant multi-person elephants gallivanting across the stage, trotting gazelles, and stately zebras.

Fun Facts about The Lion King

The Lion King clocks in at approximately 2.5 hours, with one intermission. Also, it is suitable for children six years and older.

Related Post: Your 2022 Guide to Brand-New Shows on Broadway in NYC

Searching for a kid-friendly culinary experience for a pre-show dinner or quick bite? Check out our tried and true options below, and don't forget about dessert!

Hit up nearby sweet spots for a celebratory post-show milkshake, cupcake, or cookie: 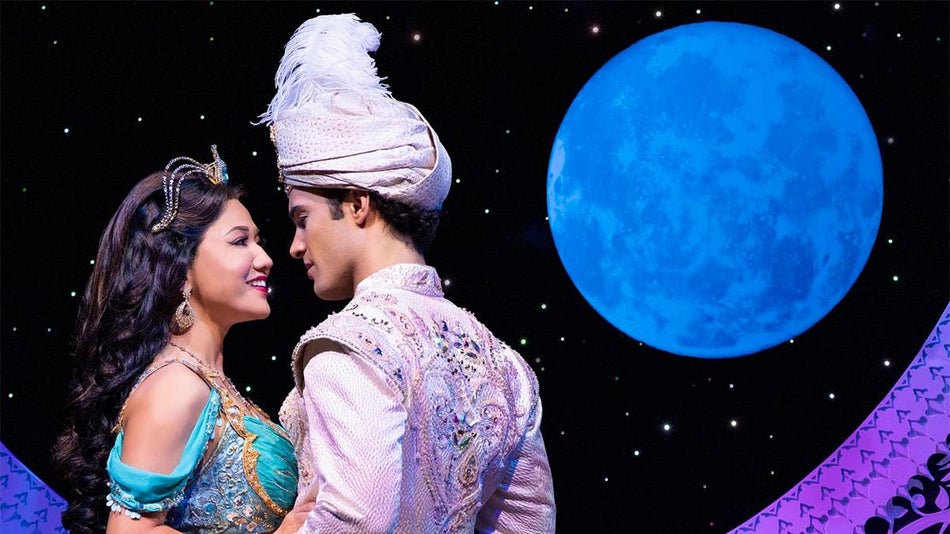 Mystical Arabian nights, a magic carpet, and a fast-talking blue genie. Is there anything more exciting than spending a few hours in the glittering, bustling Arabian desert kingdom of Agrabah?

Related Post: Where to Eat Before a Broadway Show: 15 Top Places to Go

Get swept along in the budding romance and adventure of Princess Jasmine, Aladdin, Abu, and the entire gang when you purchase tickets for Broadway's Aladdin.

A timeless story of love, transformation, and classic comedy, audiences will be swept up in street urchin Aladdin's journey from common thief to Prince Ali.

An extravagant spectacle of electrifying choreography, lavishly vivid costumes, and an Academy Award-winning score combine to create a Broadway hit for the ages.

Sing along as Aladdin meets a wish-granting genie and attempts to woo and win the heart of the fair Princess Jasmine.

Aladdin runs for approximately 2.5 hours, with one intermission. Also, it is suitable for children six years and older.

Rubbing a magic lamp, hoping for your pre-show dinner recommendations to come through? Save the magic for the Genie, and check out our favorite nearby kid-friendly eats for a fuss-free dinner.

Just one viewing of 'Broadway's biggest blockbuster' and you will be changed for good. Enter the wonderful world of Oz in this prequel to the classic film. Wicked digs into the untold story of the witches of Oz and the unlikely friendship that forms between them.

Astonishing visuals, special effects, and elaborate costumes are seamlessly woven together with mega-musical hits such as 'Defying Gravity' to create an awe-inspiring cultural phenomenon.

Fall under the spell of the resplendent Glinda the Good, or find yourself rooting for everyone's favorite green anti-hero, the Wicked Witch of the West.

Wicked runs for approximately 2.75 hours, with one intermission. Also, it is recommended for children eight years and older.

The Gershwin Theatre is conveniently located at 222 West 51 St, New York, NY. In addition, it is easily accessible by NYC public transit.

Related Post: Where to Eat Before a Broadway Show: 10 Places to Go

Looking for the most favorite foodie highlights post your Wicked performance high? Take a gander at our comprehensive list of the best places to grab a satisfying post-show meal or snack. 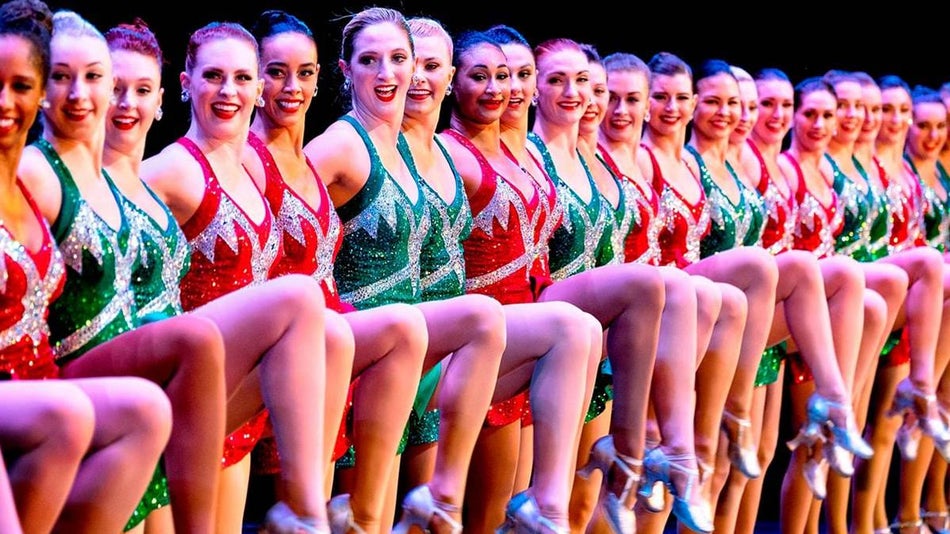 Deck the Halls and embrace the Christmas spirit with the world's most famous precision dance team! For almost a century, the Rockettes have been dazzling audiences with their high kicks, joyful singing, and undeniable glamour.

Related Post: Using the NYC Subway Doesn’t Have to Be Scary

A holiday tradition like no other, the Radio City Christmas Spectacular transports you to a world of Yuletide cheer complete with Santa, a parade of wooden soldiers, and a glowing nativity scene.

Watch in awe as Rockettes dressed like reindeer kick as high as the sky, and tap with outstanding synchronicity a jubilant countdown to Christmas eve.

The Radio City Christmas Spectacular runs for approximately 90 minutes with no intermission. Also, it is recommended for children six years and older.

Radio City Music Hall is conveniently located at 1260 Avenue of the Americas, New York, NY. In addition, it is easily accessible by NYC public transit.

Keep the festive cheer flowing. Partake in a tasty meal pre or post-Radio City Christmas Spectacular at any of our nearby preferred dining establishments:

Broadway is primed to welcome the hippest granny who ever did hip hop, bebop, and dance till ya drop this December.

Related Post: A Delicious Guide to the Best NYC Pizza

Settle in for a wild ride of musical comedy when you attend Mrs. Doubtfire!

This heartfelt and hilarious comedy will leave you dancing in your seat. It's a brand new play based on the beloved 1993 film starring the late, great Robin Williams.

A moving saga that follows the crazy lengths one devoted father will go to to see his children after a messy divorce. Mrs. Doubtfire shows us that if there's one thing we must hold on to, it's each other.

Euphegenia Doubtfire dazzles and delights as the Scottish nanny who is secretly her client's father. Besides mixing a mean cup of hot cocoa, she dispels wholesome advice. Meanwhile, Mrs. Doubtfire teaches the audience a lesson or two on the importance of family.

Mrs. Doubtfire runs for approximately 2 hours and 35 minutes. Also it is recommended for children eight years and older.

Related Post: When is the Best Time to Visit New York City?

The best nannies always have some sweet treats up their sleeves! So stave off low blood sugar meltdowns. Grab a convenient pre or post-show snack, dinner, or lunch at any of our favored dining establishments.

All children, from little tykes to full-grown teenagers, can appreciate the creativity, talent, and pure artistry poured into every Broadway production.

However, you choose to return to Broadway this season, from revisiting old favorites such as Wicked and the Lion King to discovering comic gold with the Scottish nanny sent from above, know you are in for a theatrical adventure of a lifetime.

What Kid-Friendly Broadway Shows Did We Miss?

Any kid-friendly broadway shows or restaurants you love in NYC? Share with us in the comments below!