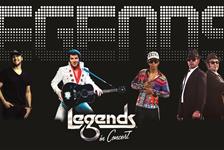 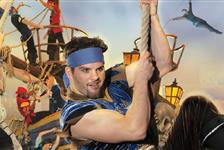 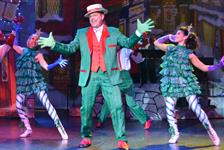 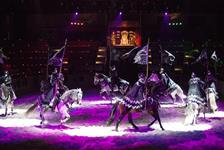 The Man of a Thousand Voices is not currently available.

Get ready to be astounded by the seemingly endless amount of impressions from master impressionist, James Stephens III. From Chris Rock to Ronald Reagan, James can do it all! Watch as he dazzles audiences with his musical, comedy, and impression talents all in one show. James Stephens III has also appeared on HBO, The Tonight Show, Showtime, and many other national shows.

from The Man of a Thousand Voices
The Asher Theatre is Myrtle Beach's newest venue to the entertainment scene. We're an upscale theatre that brings Vegas and New York city acts to the Grand Strand in a family-oriented, hip, cultural, and exciting theatre setting.

Our feature act is none other than the widely-acclaimed impressionist, comedian, and musician - James Stephens III. Stephens’ feature show, The Man of A Thousand Voices” is the ultimate family show – his talent reminds us of the days of Sinatra, Martin, and Davis and Lewis. His spot-on impressions of Bernie Mac, Bill Cosby, Chris Rock, Elvis, Michael Jackson, Bill Clinton, and Ronald Reagan are second to none. Whether doing a singing impression of Nat King Cole or a rap impression of Little Wayne, James is the ultimate performer. He's been called one of the funniest comedians of our times by the editor of Time magazine. Not only a regular headliner on all the major cruise lines, but he has also graced the halls of Carnegie Hall and the Grand Ole Opry. He's performed around the world. He was the first African-American entertainer to perform in Amsterdam and in London at Lewisham as well as the Hackney Theater. He’s headlined in Scotland, made appearances on London’s BBC and performed at the prestigious Edinborough Festival.

In the US Stephens has starred on several TV shows and done standup appearances on ABC, NBC, CBS as well as Comedy Central, HBO, Showtime, and MTV.

He's worked with Jennifer Aniston, Will Ferrell, Steve Carrell, Chris Rock, Garth Brooks, Patti Labelle, Aretha Franklin, Joe Rogan, George Lopez, Jerry Seinfeld, and others. His quick wit and Improv skills make every show different. One moment he's Kermit the frog and another Kevin Hart. His impression of Snoop Dog doing country and western is absolutely hilarious. If that's not enough, he sits at the piano and plays classical music and in a split-second, he’s doing impressions of Pharrell, Bruno Mars, and John Legend and Lionel Ritchie. James’ cross-over appeal transcends all races, gender, ethnicity or creed. Stephens' tailors each show to his specific audience so everyone leaves entertained. 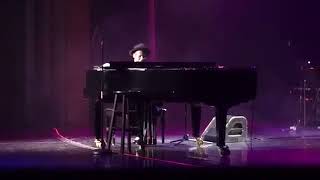 The Man of a Thousand Voices Reviews

9 Reviews sorted by:
Write a Review

Christine Hobbs
1 Review
"Not to be missed!"
August 2022
If you are in myrtle beach you need to go to this show! It is one of the funniest shows I have ever seen! It’s family friendly and just a great night out!
Read More

Kimberly Smith
1 Review
"Man of a Thousand Voices"
February 2020
Great show. Encourage locals and visitors to come see the show. Highly entertained by a very talented, funny, and energetic performer. Hidden gem right here in MB. I laughed so much I had no mascara left. My husband and I will definitely be returning. Small, personal venue. Much better than the other big, overcrowded music houses in area.. Spread the News!!!!
Read More
Tip: Small, very personal venue, but full of talent and energy.

Richard Holleny
North Myrtle Beach, SC
1 Review
Verified Traveler
"An awesome performance"
December 2019
My thanks to the Asher Theatre for the opportunity to see James Stephens, The Man of a Thousand Voices. To see such a great and unique talent in an intimate setting like the Asher was something I will never forget. Don't miss a chance to see his act and please support this great Myrtle Beach venue.
Read More

David Pickett
1 Review
"He is a man of 1000 Voices, probadly more"
September 2019
The first time I went to a comedy show was about 25 years ago. The experience then until Sept 19, 2019 kept me away. On 9-19-19, I went to see the Man of A 1000 Voices. In short, I would go back to see him 6 days a week. He is Gifted, Talented, Funny, Smart, Humble and Personable. Current comedians has nothing on James Stephens III.
Read More
Tip: Be prepared to be entertained the entire show. And bring a handkerchief or napkins because James Stephens will bring you to tears via his humor and impersonations.

Tripster Customer
Fayetteville, NC
2 Reviews
Verified Traveler
"Very Entertaining"
June 2019
It was a fun and entertaining night, The man of a thousand voices is so talented and keeps you entertained throughout the entire show. Best night ever,
Read More
Tip: Be prepared to laugh and enjoy

Tripster Customer
Durham, NC
1 Review
Verified Traveler
"Very Entertaining"
September 2018
I surprised my wife with a night out, and took her to The Man of a Thousand Voices. We thoroughly enjoyed ourselves, and laughed all night long. We will be back to see him again!
Read More

Joan Wysocki
Gainesville, FL
1 Review
Verified Traveler
"Fun & Positive!"
May 2018
My husband and I are visiting Myrtle Beach. We wanted to go to a show and had a lot of choices. We saw this listing and thought it’d be fun to see something different. And we were right! Highly recommended.
Read More
Show more reviews
Back to Top

Frequently Asked Questions about The Man of a Thousand Voices

Is this a family-friendly show?
Yes.

Does the theater have parking?
Yes. Ample self-parking spaces are available for guests.

When should I arrive for the show?
It is recommended that audiences arrive at least 15 minutes prior to showtime to find their seats.