See historic Washington DC from a new perspective. When the sun goes down and the monuments light up, you’ll embark on an unforgettable tour experience. This 3-hour tour brings guests around our nation’s capital for epic photo opportunities and history lessons at notable landmarks, monuments, and historic sites. Hop off the tour bus at each stop to see each landmark up close and in person.

from DC at Dusk Tour
Don’t miss the chance to experience Washington at night! This three-hour night tour takes you on a light-filled journey through historic Washington, DC, and nearby Northern Virginia.

The tour begins at the U.S. Navy Memorial at 701 Pennsylvania Ave. NW - halfway between the White House and the U.S. Capitol - and will bring you a unique and breathtaking look at our nation’s capital! On your way to the U.S. Capitol Building (the first stop) you pass the National Archives, which houses historic U.S. documents - the original Declaration of Independence, The
Constitution, and the Bill of Rights. In route, you will also see the Newseum, the Canadian Embassy, and the National Gallery of Art.

Emerging in sight will be the U.S. Capitol, where you’ll take in a memorable, two-mile long, panoramic view of the Smithsonian Museums (the largest museum complex in the world), and the Washington Monument (the tallest, freestanding stone structure in the world), flooded with lights –creating an unforgettable experience.

On your way to the White House, you’ll pass the U.S. Botanic Garden, Grant’s Memorial, The U.S. Navy Memorial, the Robert F. Kennedy Department of Justice, and the J. Edgar Hoover Federal Bureau of Investigation.

When arriving at the White House, you’ll not only see the Executive Residence of the President and his family, you will also see the Dwight D. Eisenhower Executive Office Building. This stop also includes a walk past Lafayette Park, honoring the Marquis de Lafayette, leader of French forces.

Once finished at the World War II Memorial, you will visit the beautiful Jefferson Memorial – which was built from 1938 – 1943 – on the Tidal Basin, lined with cherry trees that were a gift of friendship to the People of the United States from the People of Japan.

Across the Tidal Basin, you’ll visit the Reverend Dr. Martin Luther King, Jr., Memorial – dedicated in 2011; quite a site, at night!

On the way to the last stop at the U.S. Navy Memorial, we visit the Iwo Jima Memorial, where you can take in a twinkling, and spectacular view of the Washington, DC landscape. 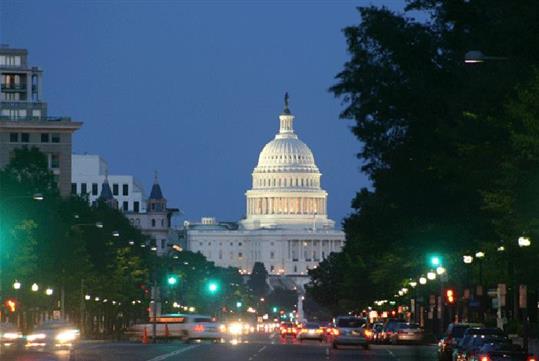 Mary W.
Orlando, FL
1 Review
Verified Traveler
"Poorly run and we hit another vehicle"
July 2019
We were there on the Anniversary of the Apollo 11 flight therefore it was anticipated that traffic was going to be an issue. Our guide assured us we would be back by 10:15 pm since we left for the tour early. Our guide also said the driver knew short cuts to keep us away from the Apollo traffic. At one point he was driving us away from the Apollo traffic and then literally turned us around to go right back into the heart of it. It is my opinion that this was deliberate because the guide was obsessed with seeing the Apollo projection on the Washington Memorial and mentioned it over 10 times. The guide kept mentioning that the projection was "once in a lifetime" and it didn't matter that we were stuck in traffic because we were all on vacation. While in traffic we hit another vehicle and the driver and guide avoided the whole accident and didn't even stop.

People were literally asking to get off the bus while sitting in traffic. My group was not on vacation and had to be at a conference at 7 am. The tour did not end until midnight putting us back to our hotel even later.

I expressed my discontent in an email prior to submitting this review to see if they would be willing to rectify this poorly run tour but avoidance seems to be issue with this company.
Read More
Tip: choose another company
Back to Top