Below you’ll discover 10 places to go for the best views of the Golden Gate Bridge.

A modern marvel that defines San Francisco's landscape, the Golden Gate Bridge is one of the city's most popular and photographed landmarks. Throughout San Francisco, you can see its “international orange” peeks but some views are definitely better than others.

The view of the Golden Gate Bridge plastered on postcards worldwide? It’s from Battery Spencer. To get here, cross the Bridge to Marin County towards the Marin Headlands Coastal Route. Follow the route until you find Battery Spencer, an old military installation with crumbling buildings and historic artifacts. From this vantage point, there are no obstructions and the eye-level views mean you can get some incredible photographs. There’s also a viewing platform at Battery Spencer, with plenty of room, so you won’t have to battle for your sightseeing spot.

With a waterfront location, the public park and beach of Crissy Field create an idyllic yet easy-to-find spot for some of the best views of the Golden Gate Bridge. As the outlook is eye-level with the water, you won’t get some of the higher-up vistas here. However, the scene is as equally beautiful and just as charming. Plus, at Chrissy Field, you can stop at the Beach Hut Café or Warming Hut for a quick bite as well as capture the full scope of San Franciscan life as locals are normally frolicking in the park.

Military lookouts are some of the best places to get epic views of the Golden Gate Bridge, and Hawk Hill is no exception. With a location further up from the aforementioned Battery Spencer, it has an even higher perch for fantastic picture taking. The panoramic views, framed by the skyscrapers of the city, are unbeatable.

The rugged cliffs of The Presidio, a former US military base, set the scene for the indomitable views one gets from Baker Beach. There are numerous outlook points here, each offering a unique perspective of the Golden Gate Bridge. This is also a great place to have a picnic lunch. So, stop by a nearby deli like Angelina’s Catering Company for a meal-to-go for a memorable midday break.

At a distance of three miles from the Golden Gate Bridge, Lands End provides a distinct perspective. The wide-open sea and wild wilderness of the coast border the view, creating a unique juxtaposition of man-made marvel and natural splendor. The popular Eagle’s Point trailhead is nearby, so you can easily hike the area for several unforgettable sighting opportunities.

For the best views of the Golden Gate Bridge, it’s hard to beat Marshall Beach. Less crowded than Baker Beach, the allure of Marshall Beach lies in its seclusion. It’s a photographer’s paradise, as black rocks, sea cliffs, and crashing waves surround the vista. Come at sunset to be treated to the extraordinary scene only Mother Nature could make.

On a bay cruise, you get to see the Golden Gate Bridge from all angles.

From Fisherman’s Wharf hop aboard one of the harbor cruises operated by companies such as Red and White Fleet or Blue & Gold Fleet. It’s a super touristy thing to do, but hey, you’re on vacation—embrace being a tourist! Being on a cruise allows you to get various vantage points of the bridge. Bonus: you don’t have to do any of the work! You can get a variety of angles and compositions for photos, and being on the water adds an amazing element as well. Need another helpful tip? Take a cruise around sunset for some truly impressive views! 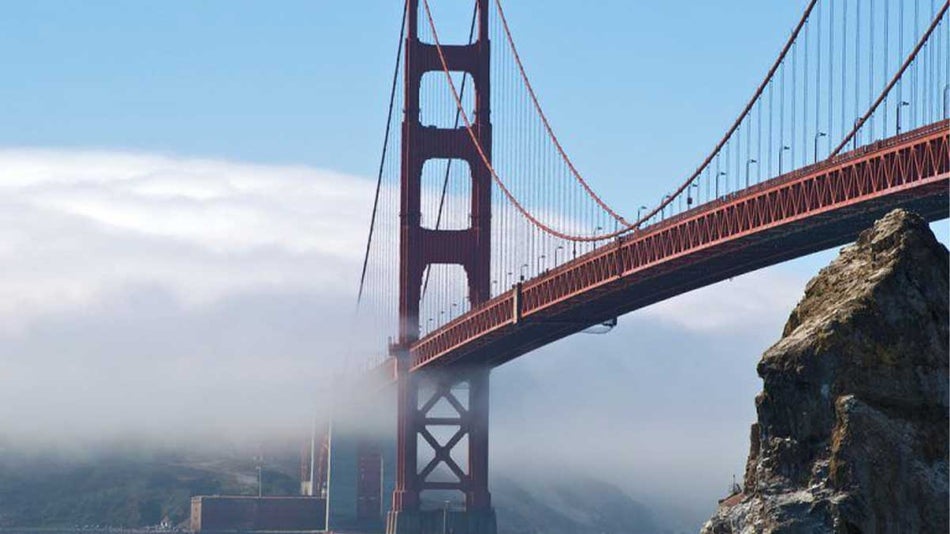 Another vantage point for the best views of the Golden Gate Bridge on the Marin County side, Fort Baker is a hidden cove with breathtaking views. It’s not as easily accessible as some of the other viewing spots mentioned in this article. That said, it’s an uncrowded and totally serene spot to take in the impressive scene that is the Golden Gate Bridge.

See the Best of the Golden Gate Bridge

To make your exploration of these sights super easy, use this handy map pinpointing the exact locations of each. Each number correlates to the list above.