San Francisco is home to a myriad of tourist destinations like Alcatraz Island, Fisherman’s Wharf, Pier 39, and the Golden Gate Bridge. But the truly curious travelers all seek out the best San Francisco hidden gems.

Finding these secret spots throughout your vacation allows you to see the local side of the city, free from hoards of tourists. Go on a quest to see all of the San Francisco hidden gems on our list when you’re in the Bay Area!

In 1896, entrepreneur and silver mine millionaire Adolph Sutro opened a massive recreational facility complete with a saltwater pool and aquarium on Point Lobos Avenue. He also built a 3-acre public bathhouse on the property. The bathhouse continued long after his untimely death but eventually went out of business before falling victim to a fire in 1966.

Today, you can explore the ruins and resulting cave for one extraordinary adventure. While guests are allowed to enter the sea cave, be cautious of sneaky waves which can cover the lower parts of the cave.

Among the most beautiful and breathtaking San Francisco hidden gems is the Land’s End Labyrinth. Created by artist, Eduardo Aguilera, the design was inspired by the rocky shoreline of Land’s End. While he hoped to keep his creation a secret, hikers and travelers quickly found and shared his work with the world.

If you visit the labyrinth, please be respectful and do not touch. It has sadly been destroyed and rebuilt twice before.

The Wave Organ, a wave-activated acoustic sculpture situated on a jetty in the San Francisco Bay, was created as part of the Exploratorium in 1986. With 25 PVC and concrete organ pipes at various elevations, sound is made when the waves crash against and inside of the pipes.

The soothing and eerie sounds are best at high tide, so be sure to check the tide forecast before you visit.

Although San Francisco is home to many famous sets of staircases, none are quite as popular as the Vulcan Stairs. Lined with perfectly manicured gardens and quirky houses, this two-block staircase is a hidden treat for any visitor.

Many say that the staircase gardens resemble a jungle-like environment, adding to the adventure of climbing them!

One of the most fascinating San Francisco hidden gems is found in the Yerba Buena Gardens. While there are several sculptures placed throughout the gardens, none are quite as mesmerizing as Urge. This particular sculpture is situated in the Children’s Garden and moves as you sit on the bench across from it.

Be sure to visit the other sculptures and art in the garden including Three Dancing Figures, MLK Memorial Silver Walls, and Shaking Man.

This secret spot is sure to put a smile on your face, especially as you slide down the street! The Seward Street Slides boast silly signs stating “No adults unless accompanied by a child,” prompting visitors to prepare for a good time.

Be sure to pay these slides a visit (and a turn) during your next San Francisco excursion. However, please note, since the slides are located in a residential park, locks are put in place after the park closes at 5:00 pm.

You could go to the zoo to see tropical birds. Or, you could head to Telegraph Hill in San Francisco. The birds began appearing in approximately 1990 after a pair of escaped parrots set up home there. Naturally, the flock began to grow, and soon there were hundreds of them!

Since neighboring homes plant and tend to beautiful wildflowers, it will also feel like a wild paradise as the parrots fly overhead as you explore.

Musee Mecanique is one of San Francisco’s strangest, yet most intriguing, hidden gems. As the world’s largest private collection of coin-operated mechanical musical instruments and antique arcade machines, this attraction offers an experience you’ll never forget.

Bring plenty of quarters, too! All of the machines are in working condition and are on display for guests to interact with. 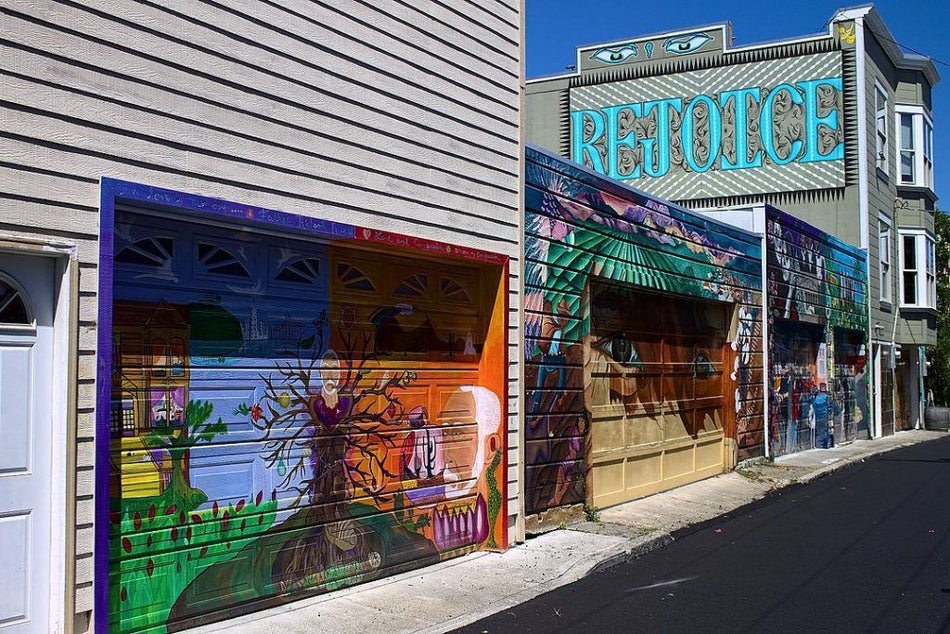 Art lovers traveling to San Francisco all flock to Balmy Alley to witness the most concentrated collection of wall murals in the city. This artistic hot spot began in the mid-1980s after artists began expressing their frustration over political happenings and human rights abuses occurring in Central America.

Today artists use the space to demonstrate their views on everything from gentrification to political stances. Take time to stroll through the alley and marvel at the different murals and public art.

It’s easy to see how artistic the Bay Area community is. Just take a trip to the 16th Avenue Tiled Steps and you’ll see what I mean. San Francisco artists transformed 163 boring stairs on a staircase into a magnificent piece of public art.

Take the trip out to 16th Avenue, about 15 minutes from Golden Gate Park, to see and climb this masterpiece.

If you’re searching for tastier San Francisco hidden gems, look no further than the Swan Oyster Depot. Raved about by locals for their insanely fresh seafood (and oysters, obviously), there’s no better spot for a bite to eat in the Bay Area.

Don’t fall for the tourist traps in Fisherman’s Wharf and on Pier 39 and head to this local eatery instead!

Last on our list of San Francisco hidden gems is Angel Island State Park. People love visiting the park due to its incredible Bay Area views and ample hiking trails. Plus, the park boasts a rich history dating back hundreds of years to when native tribes used the lands for hunting and gathering.

While at the state park, take advantage of the swimming, fishing, windsurfing, and other recreational activities available.

Visit All of the Top San Francisco Hidden Gems

The next time you’re in the Bay Area, make it a point to visit the city’s best secret spots! Which hidden gem is your favorite?