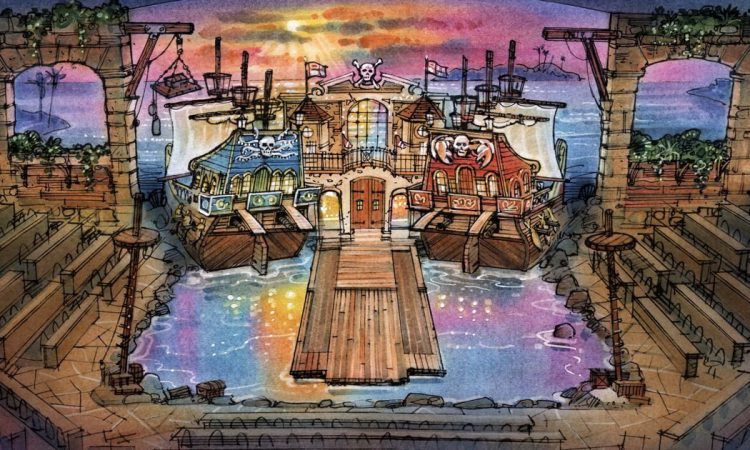 The popular Myrtle Beach dinner show, pioneered by none other than Dolly Parton, is setting sail in Pigeon Forge in 2019. Pirates Voyage Pigeon Forge TN is set to hoist an anchor down in the Smoky Mountains in the spring of next year.

As mentioned in the official announcement, Dolly Parton stated, “The show has been so successful in Myrtle Beach that we kept looking at Pigeon Forge and wondering why we didn’t already have a Pirates show there,” Dolly said. “We have the perfect location, in one of the hottest areas of Pigeon Forge, and the time is now for my pirates to stake claim to the Great Smoky Mountains!”

When Pirates Voyage Pigeon Forge TN comes to the Smokies, you’ll find it adjacent to the Island in Pigeon Forge. The magnificent 21,000 square foot arena is home to the swashbuckling Crimson and Sapphire pirates. Audiences watch in amazement as these two pirate crews battle it out for the treasure on deck, in the water, and high in the sky.

On top of a dazzling show, guests are treated to a five-course pirate feast. At the Myrtle Beach Pirates Voyage show, guests devour four-courses which include:

The menu for Pirates Voyage Pigeon Forge TN has yet to be released. Vegetarian and gluten-free meals are also available by request.

While the show doesn’t premiere until next spring, you can start planning your Pigeon Forge vacation now! Remember to bundle your show reservations and Dollywood tickets with a Smoky Mountains hotel for additional discounts.