NYC After Dark: The Top Things to Do in NYC at Night

From the magnificent museums and theater performances to sprawling, diverse neighborhoods with larger-than-life skyscrapers, you can never fully explore New York City.

Whether you're interested in Broadway shows or heading to the top of the Empire State Building, you'll never feel bored by NYC's creative and chaotic nature. With so many ways to spend your vacation, what are the top things to do in NYC at night? Read below to see which destinations you need to place on your travel itinerary.

If you're a musical theater fan, you need to experience the majesty of a Broadway show in New York City. If you're not, you may become one once you witness the immense talent carefully composing each performance. From the musical numbers and engaging dialogue to the complex set designs and costumes, Broadway performances are truly a feast for the senses. Some notable current shows include:

Running for over fifteen years, this international sensation features captivating musical numbers, extravagant costumes, and an intricate set. WICKED relays the untold story of the Wicked Witch of the West and the Good Witch before they claimed those titles.

Winner of more than 100 global awards, WICKED presents a magical performance. With acclaimed numbers like "Defying Gravity" and "Popular", the musical has been declared "The Best Musical of the Decade."

Based on the novel by Gregory Maguire, WICKED runs for two hours and 45 minutes with one intermission. Also, the musical is not recommended for children under the age of eight years old, and children under five years old will not be permitted.

This 2017 Tony Award winner for Best Musical presents the heartbreaking story of a teenager named Evan Hansen who is forced to lie after the death of a classmate.

After reading a private letter, Evan’s life is changed forever as he is given the chance to fit in for once. This profound contemporary musical poses profound questions and has moved both audiences and critics alike.

Related Post: Your 2022 Guide to Brand New Shows on Broadway in NYC

The how spans for two and a half hours and includes one intermission. Further, the show is recommended for ages 12+. 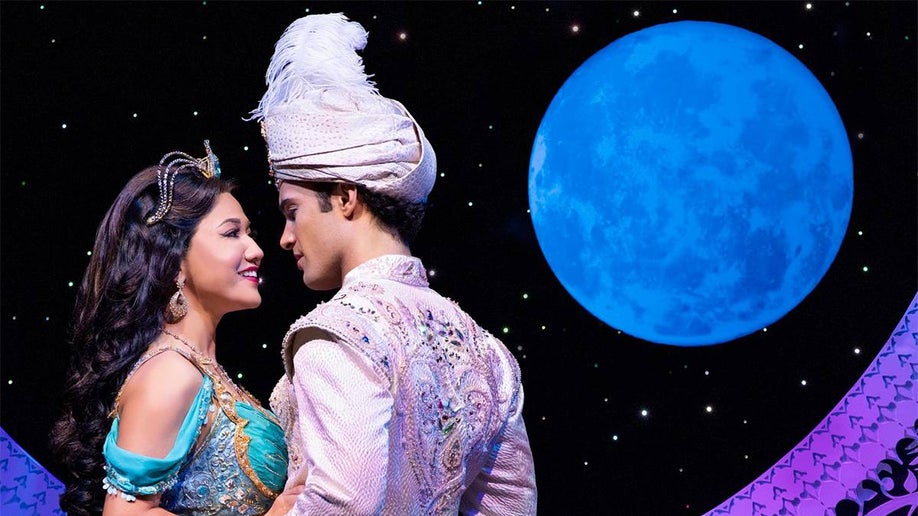 Based on the 1992 Disney animated classic, Aladdin dazzles audiences with this new screen-to-stage adaptation. Presented at the New Amsterdam Theatre, this extravagant musical features a whole new world of entertainment for guests of all ages.

This two-and-a-half-hour show presents incredible talent, elaborate costumes, and classic numbers such as "Friend Like Me".

Related Post: Your 2022 Guide to Kid-Friendly Shows on Broadway in NYC

Enjoy a novel take on the timeless classic from the producer of The Lion King and the director and choreographer from The Book of Mormon and Something Rotten!

Note that Tripster provides incredible deals on numerous Broadway shows to meet your budget needs. No matter which show you see, attending a Broadway performance tops the list as one of the greatest things to do in NYC at night.

Of course, off-Broadway shows exhibit just as much talent at countless theaters throughout New York City. Catch a rendition of a Shakespeare play at the Delacorte Theater in Central Park during the summer. Or see comedic and cabaret acts at The Public Theater.

You can see honed professionals, as well as burgeoning artists, display their skills. Check out theaters such as La Mama, 59e59, and The Flea to ensure you partake in one of the best things to do in NYC at night.

Nights at the Museum

One of the best things to do in NYC at night is to visit any one of their awe-inspiring museums.

Several of them are open fairly late, so if you didn't make time during the day, no worries. Several key art and history museums to visit include:

This internationally renowned modern art museum offers stunning pieces of modern art as well as educational and entertaining experiences for guests. Gaze at works by Van Gogh, Picasso, Cezanne, Warhol, and beyond.

Also, guests can view daily film and video screenings as well as participate in gallery discussions.

Bronx Museum of the Arts

A globally-recognized museum, the Bronx Museum features contemporary artwork that attempts to connect audiences to the urban experience.

A reflection of the Bronx borough's diverse communities, the museum hosts a permanent collection, special exhibitions, and educational programs. Usually, open until 6 pm Wednesday through Sunday, you can visit the museum until 8 pm on Fridays. As an added bonus, admission is free!

While the museum remains open until 6 pm Monday through Thursday (and on Sunday), the Whitney extends its hours until 10 pm on Fridays and Saturdays. Note that the museum is closed on Tuesdays.

Other museums with evening hours:

Are you a fan of Saturday Night Live, The Tonight Show, or Late Night?

Well, you can potentially receive rehearsal tickets in order to sit in the live audience of a show's taping.

Although SNL tickets need to be acquired long in advance, you may have an easier time obtaining same-day tickets for shows like Late Night and The Tonight Show via NBC.

Best of all, it's free to attend! Attending a live taping can be one of the best things to do in NYC at night.

The city that never sleeps presents countless options for bar and pub crawls. You can make your own itinerary or take advantage of the numerous tours offered. Dance the night away, have a few drinks, and admire the views of the city skyline.

The Staten Island Ferry is one of the few remaining remnants of New York City's ferry system that once transported people between Manhattan and its future boroughs before any bridges were constructed.

Related Post: 5 of the Oldest Bars in New York City

Currently, the Staten Island Ferry carries 70,000 passengers each day (not including weekend days). Offering a glorious view of Lower Manhattan, the five-mile, 25-minute ride also gives views of The Statue of Liberty and Ellis Island. The ferry schedule runs late, so it's one of the top things to do in NYC at night, and service is free.

In order to see the best city skyline views, consider taking any of these quintessential NYC observation deck tours:

Head to the 86th floor of the Empire State Building to capture magnificent views of Central Park, the Brooklyn Bridge, Times Square, the Statue of Liberty, and much more. You can also head to the 102nd floor for a complete bird's eye view.

The highest open-air observatory in NYC is open until 2 am, so it's one of the prime things to do at night in NYC. Also, you can download the Observatory Experience app to learn about your view from every direction.

Make sure to also take advantage of the deck's high-powered binoculars. Further, if you want the full Empire State experience, check out the Empire State Building Tour.

Travel 102 floors to the top of One WTC in 47 thrilling seconds via the SkyPod Elevators! The indoor observation deck offers 360-degree stunning views of the city skyline below.

Furthermore, the Sky Portal, a 14-foot wide circular glass disc, provides a unique perspective using high definition footage of the streets 100 floors below. Although hours change based on the date, the deck remains open until 8 or 9 pm. For the best experience, we recommend the One World Observatory & World Trade Center Tour.

Related Post: Using the NYC Subway Doesn’t Have to Be Scary

Also, the Top of the Rock at Rockefeller Center also gives unbelievable views of the city and remains open until 12:30 am.

Walk Across the Brooklyn Bridge

Gain beautiful views of the city skyline at night along the mile-long pedestrian walkway. We recommend you walk with a partner just for the safety in numbers factor. You can walk from the Brooklyn end or from the Manhattan end, although the Brooklyn end provides better views.

With that being said, it's easier to access the pedestrian walk from the Manhattan side, so it depends on your preferences. Make sure to stay in designated walking lanes to avoid dangerous collisions with cyclists.

To access the walkway from Brooklyn, you can either enter via the underpass on Washington Street or head to the intersection of Tillary Street and Boerum Place.

From Manhattan, the entrance begins across from the northeast corner of City Hall Park along Centre Street. Because you can walk across the bridge whenever you please, this activity sits near the top of the best things you can do in NYC at night.

Because of the city's diverse cultures, residents and visitors have countless kinds of cuisines to sample. You'll leave full and happy, and many of these restaurants are open fairly late. Various options include:

One of the top destinations associated with New York City is, of course, Times Square. This major commercial intersection encompasses the Midtown Manhattan section of the city at the junction of Broadway and Seventh Avenue.

Lively and vibrant, you can spend hours shopping, dining, attending a Broadway Show, visiting Madame Tussauds, and much more.

You can even stroll and people watch as hundreds of pedestrians and cars zoom by you. Due to its endless amount of activities, visiting Times Square is one of the top things to do in NYC at night.

Since 1913, Grand Central has served as the main transportation hub in Midtown Manhattan. The beaux-arts landmark not only operates as the home of the MTA Metro-North Railroad but also serves multiple Subway lines. In addition, Grand Central hosts numerous retail and dining establishments for convenience.

With 750,000 visitors every day, the terminal can be quite busy, but this is less the case in the evening when trying to simply tour the facility. Make sure to look up at the four-faced opal clock above the Information Booth in the Main Concourse.

What are Your Favorite Things to Do in New York City at Night?

With so many options, where will you head to first in New York City? For more ideas and discounts, head to Tripster New York City to make the most of your vacation.