One of the most delicious treats you can get in Hawaii is shave ice. Simple yet satisfying, shave ice resembles a snow cone but is much better.

The ice-based dessert is made by shaving a block of ice, creating delicate layers of ice rather than crushed ice.  In fact, the shaving creates layers so thin it’s almost snow like.  Of course, one of the reasons a Hawaiian shave ice is so good is the variety of flavored syrups you add to the sweet treat.

Plus, since the shave ice is so fine the flavorings are absorbed into the ice rather than settling to the bottom of the cup as with a snow cone.  Traditional American flavors like grape, strawberry, raspberry and cherry are common, as are local flavors like guava, pineapple, coconut, passion fruit, li hing mui, lychee, kiwi fruit and mango. 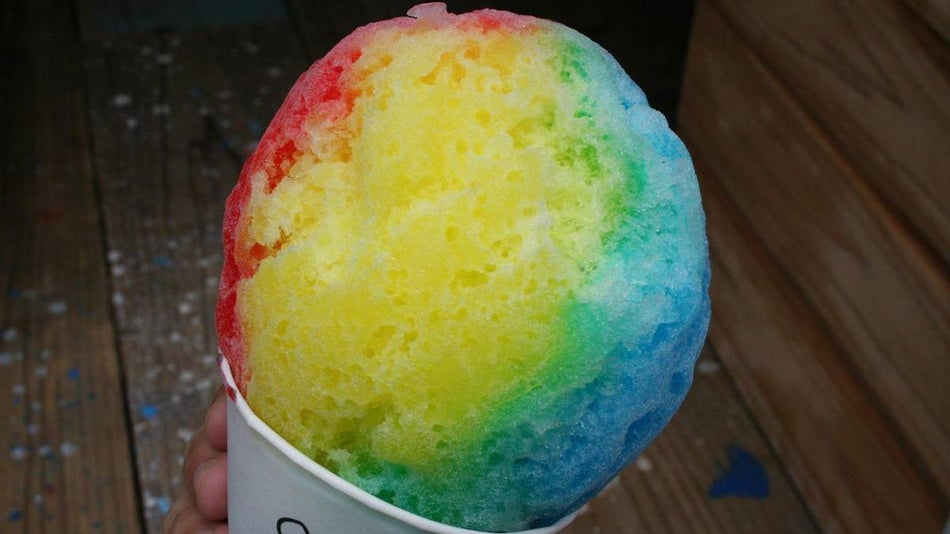 You can create any flavor combination you like by mixing syrups, and most Shave Ice stands feature their own special concoctions.  A scoop of vanilla ice cream and azuki bean paste can be added to the bottom of the shave ice treat, and sometimes a “snow cap” is added to the top.  What’s a snow cap?  It’s sweetened condensed milk.  This style of shave ice is the signature dessert of Haleiwa in Oahu.  It might sound like an odd topping but it’s actually quite tasty.
Shave Ice can be found on all the major Hawaiian Islands.  From mom and pop stores to shave ice stands to lunch wagons, the delectable Hawaiian dessert is served everywhere.  One of the most famous shave ice stands is Matsumoto’s.  Located on Oahu’s North Shore, the stand features over 30 flavors and has been in business for over 60 years.
An interesting fact about shave ice is its origin.  When Japanese plantation workers migrated to the Hawaiian Islands, they brought the traditional dessert with them. How did they make the treat?  By using swords to shave ice from large blocks of ice.  The treat – known as kakigori in Japan – has been a signature Hawaiian snack ever since.