21 Totally Free Things to Do in Boston

As any traveler knows, the one way to make any vacation better is the word free! Let’s face it—attraction passes and hotel stays can add up quickly.

That’s why discovering activities that don’t cost a dime is a big win. With that in mind, we’ve compiled the best free things to do in Boston. On your next trip to Beantown, be sure to stretch your budget by adding these ideas to your itinerary.

There’s no better place to discover the rich history of Boston than on the Freedom Trail. Established in 1951, this 2.5-mile trail covers 16 historic landmarks. Simply follow the thin red-bricked trail, which is marked with medallions to signify your proximity to a location, to see notable places like:

You can walk the Freedom Trail by yourself or opt for a pay-what-you-wish walking tour.

Technically, Harvard is in Cambridge. But, don’t let that stop you from adding it to your free things to do in Boston agenda. Hop on the subway and a quick 20-minute ride later you’ll arrive at one of the most prestigious schools in America. Once there, take a free student-led tour of the campus that includes a walk around the campus and Harvard Yard. Of course, there are also free self-guided tours available if you prefer to explore the campus solo.

Faneuil Hall is one of the notable places along the Freedom Trail. However, it deserves a separate shout out for several reasons. First, this hall has been a meeting place since the 1740s. At that time, it was a hotspot for hearing speeches regarding America’s Independence and the Revolutionary War. Second, it’s now home to Quincy Market, a place offering numerous (and delicious!) food stalls and restaurants. You can opt to buy lunch here or to keep your visit truly free simply people watch and take in the history of the Hall.

Any beer fan knows Sam Adams, the beer brand named after the famous statesman and founding father Samuel Adams, is located in Boston. You may not know, however, that they offer free tours to the public. Stop by Monday-Thursday or on Saturday from 10 am – 3 pm. Tours depart approximately every 40 minutes and last about one hour. And, don’t worry if you’re not 21. You can still go on the tour and learn all about Sam Adams beer. You just can’t sample the free beer at the end.

The Boston Public Library is a beautiful piece of architecture containing more than 1.7 million rare books and manuscripts. In addition, visitors can find a major collection of artwork here. In fact, due to the vast works housed at the Boston Public Library, it’s considered one of the five most important libraries in the nation.

If you’d like to learn more about the library, including the art on display and it’s architecture, take a free tour. Typically, they are available daily but times vary. Be sure to check the Boston Public Library website to confirm tour times.

When it comes to free things to do in Boston, many have a historic connection. This is certainly true with our next pick—the Massachusetts State House. Take a tour of the building to learn about its history, architecture, and how the state works. Tours of this National Historic Landmark are available 10 am- 3:30 pm on weekdays only and last about 30-45 minutes. 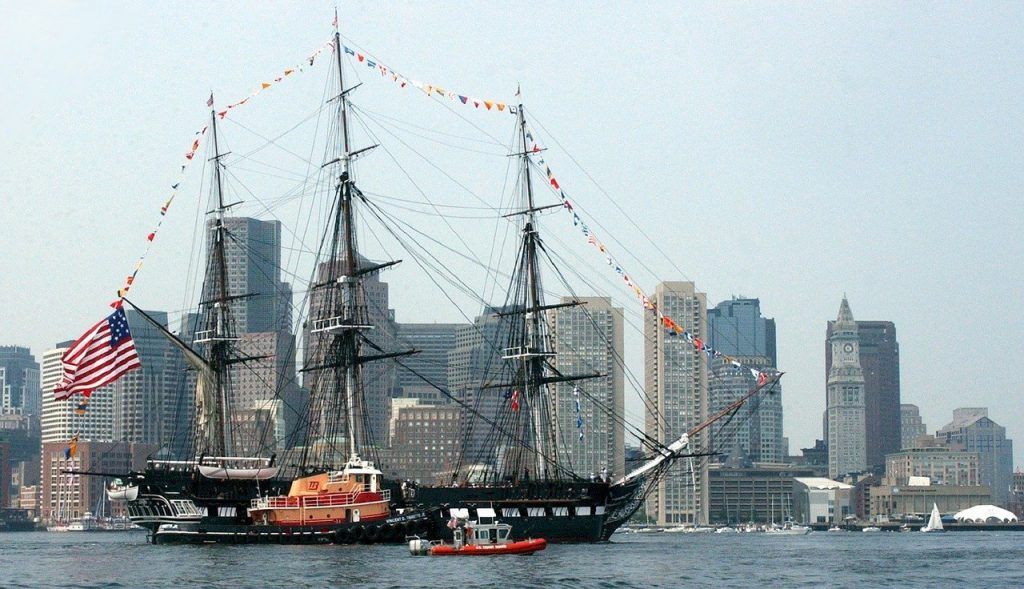 7) Step Aboard the USS Constitution

Did you know the USS Constitution is the oldest ship in the world still afloat? Pretty amazing, huh? Visit this ship, which is permanently docked in the Charleston Navy Yard, to explore what life at sea was like over 200 years ago. Free tours are available every 30 minutes days from 10 am – 4 pm (extended hours offered during summer).

Dating back to 1634, the Boston Common is the country’s oldest park. It’s a gorgeous space to kick back, relax, and soak up a little bit of the Boston atmosphere. Stroll over to the public garden, America’s first botanical garden, or take a respite by Frog Pond, offering ice skating in the winter and a splash pad during the summer. Of course, there are several historic locations and significant monuments in Boston Common too. They include:

8) Stop by the Granary Burying Ground

The idea of visiting a graveyard might sound macabre. However, there are a lot of notable figures buried here. Among them, three signers of the Declaration of Independence. While visiting the Granary Burying Ground, search for these tombstones:

Another of the top free things to do in Boston is climbing the Bunker Hill Monument. Standing 221-feet, you can climb to the top for incredible views of the city. Plus, it’s absolutely free! Due note, though, you will need to obtain a climbing pass from the nearby Bunker Hill Museum. These are available on a first-come, first-served basis.

Bunker Hill is significant because it was one of the first important battles of the Revolutionary War. While the British forces did win the battle, the strength the American forces showed dramatically changed the warfare moving forward.

Did you know Irish-Americans are the largest ethnic group in Boston? In fact, over 20% of people claim to be of Irish descent in Boston. When you walk the free Irish Heritage Trail you can explore some of the most significant contributions made by the Irish community. In total, there are 16 sites to see along the 3-mile walk.

Head to the Jamaica Plain neighborhood to visit Arnold Arboretum, Harvard University's free outdoor tree and plant museum. There are over 260 acres to discover, creating a truly serene spot in the middle of big city Boston. Among the highlights are a bonsai tree collection, flowers from all over the world, sprawling lawns, and much more!

In South Boston, you’ll find Castle Island. During your visit, you can explore the famous Fort Independence at no charge. In addition, during the summer months, there are fantastic beaches to enjoy. 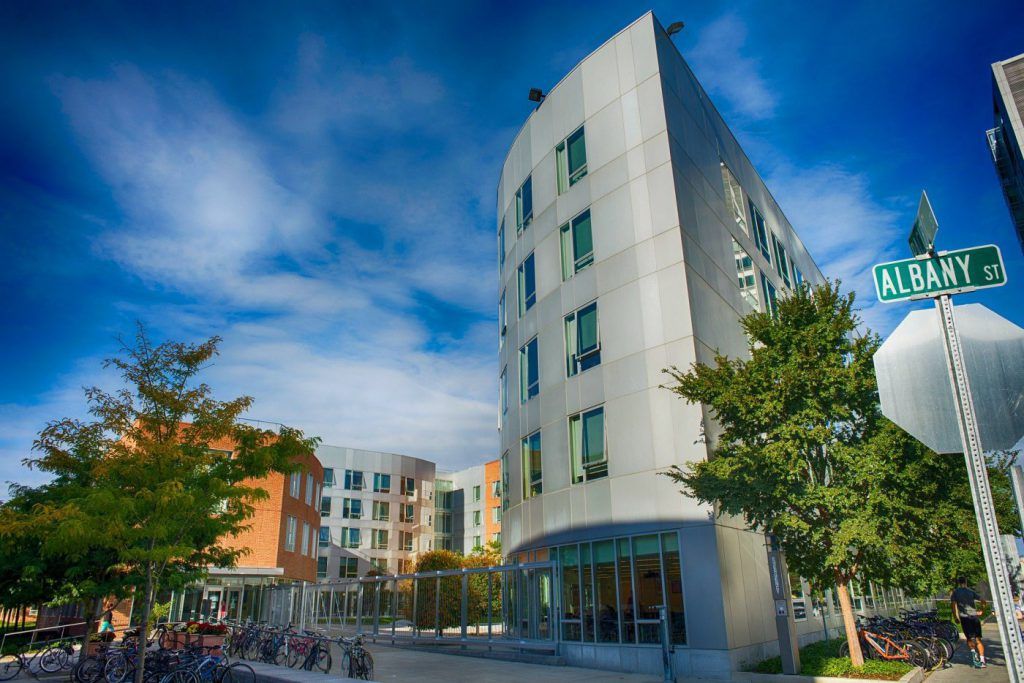 One of the most well-respected universities in the world, the Massachusetts Institute of Technology, can be toured free of charge. Visit the Cambridge campus to see interesting art and architecture. Simply pick up a free map from the information office to find your way around this university famous for its focus on engineering and research.

14) Stroll along the Charles River

For a free and scenic experience, take a stroll along the Charles River. The Charles River Esplanade stretches for 17-miles in the Back Bay Area. In addition to simply taking a walk here, visitors can bike, rollerblade, canoe or kayak. If you’re traveling with kids, there’s also a fun playground to explore.

You can also catch free summertime concerts as well as free movie showings at the Hatch Shell. Moreover, the Hatch Shell is the location of the free Boston Pops concert on July 4th.

Originally built in the 17th century, the Custom House is one of the most recognizable buildings in the city. Built right along the waterfront, the building has undergone many transformations over the years including a tower addition in 1915. In fact, that tower addition made the Custom House the tallest building in the city at the time. Today, visitors can take a free tour (by appointment) to go up to the observation deck on the 26th floor.

Tours are available Sunday-Friday from 10 am-4 pm.

Exploring Boston by foot is one of the best ways to see the city. However, as a visitor, you might not always know where you’re going. That’s where free walking tours come in handy. Take advantage of offerings from Free Tours by Foot and Strawberry Tours to get an inside look at the city—free of charge! Keep in mind, though, guides do appreciate tips.

Another of the interesting free things to do in Boston is trek the Black Heritage Trail. This walking tour in Beacon Hill covers 14 distinct stops that play an important part in African-America history. Stop by the Abiel Smith School for a helpful, free map.

You might think the words “beach” and “Boston” belong together. But, you’d be surprised! Summers in Boston can get fairly warm. With that in mind, it’s good to know there are two awesome beaches—Winthrop and Revere Beach—located under an hour from Downtown. Visit Winthrop for a quieter experience or opt for Revere Beach for more coastline and options for eating and shopping.

One of the most fun spectacular things to do in Boston takes place outside. Visit the Coit Observatory at Boston University on Wednesday evenings for a free stargazing session. They offer up their telescopes and binoculars to the public for a truly incredible look at the night sky. However, space is limited so be sure to reserve your spot in advance.

According to the Boston Globe, the Skinny House holds the "uncontested distinction of being the narrowest house in Boston." Located at 44 Hull Street in the North End, this house is surprisingly spacious considering its only 10 feet wide and 30 feet deep. The Skinny House is also known as the Spite House due to its history. Lore has it the house was built as the result of a feud between two brothers during the Civil War era. When one brother returned from the war he found the other brother had built a large house on land they were meant to share. As a result, the built the skinny house to block his brother’s view. No matter the story, it’s definitely worth a look!

21) Visit a Museum or Gallery

It’s no secret Boston is home to many world-renowned museums. However, you might not know many of them offer free admission.

The Best Free Things to Do in Boston

There you have it—the best free things to do in Boston! And, it’s quite the list. As a result, it’s pretty easy to have fun in Boston all while keeping your budget intact.