30 Unbelievable Disneyland Facts You Should Know

Disneyland is the original source of magic for the Disney theme park empire, and we all know and love the classic rides like the Jungle Cruise and the Matterhorn.

With that being said, there are so many fun and strange facts about the park that we bet you don't know. In fact, we've included a few secrets as well.

Go behind the scenes with us as we unearth 30 lesser-known Disneyland facts. Whether you're amazed or weirded out, we can guarantee you'll find a new appreciation for the park's history.

According to CNBC, admission to the park cost $1 for adults and 50 cents for kids. Now, a one-day ticket to Disneyland Park costs at least $104 per adult guest.

2) Plants of the Future

You can actually eat the plants in Tomorrow Land, as the landscape was designed to double as a farm.

The Haunted Mansion ride's grounds house a pet cemetery on the side lawn, but don't worry! It's fake and the grave stones have funny inscriptions.

One of the most interesting and expensive Disneyland facts: the facade of the It's A Small World building is allegedly completely covered in gold leaf.

Walt Disney had his own 500-square-foot private apartment above the fire department on Main Street. Visitors who notice the apartment window will see a lit lamp, which signifies Disney's continual presence.

7) First Daily Monorail in the West

The monorail at Disneyland opened in 1959, and at the time, it was the Western Hemisphere's first daily operating monorail system, according to the park's social media director.

Visitors can throw coins down the Wishing Well in Snow White Grotto to the right of Sleeping Beauty Castle. You can hear her voice echoing in the well and throughout the peaceful garden area. Your wish will be donated to children's charities.

One of the best lesser known Disneyland facts regards the riverboat ride. Ask an employee to check out the captain's quarters of the Mark Twain Riverboat. You may be allowed to steer the ship and signal to other boats.

The fastest ride at Disneyland (excluding the Incredicoaster at Disneyland Adventure Park) is actually Splash Mountain. Passengers reach approximately 40 mph when taking the 47-degree fall into the briar patch.

One of the weirder Disneyland facts: The Haunted Mansion and Pirates of the Caribbean were both allegedly shut down for a short time after staff caught passengers dumping what turned about to be human ashes onto the grounds. Now, the park explicitly forbids cremated remains.

Feral cats have roamed the grounds since the park opened, which Disney originally discouraged. However, they have been embraced, as they are typically nocturnal anyway. Around 200 cats reportedly reside at the park.

13) Skeletons in the Treasure Cove

According to Imagineer Jason Surrell, human bones from the UCLA Medical Center were used as props for the Pirates of the Caribbean ride when it opened in 1967. Supposedly, passengers can spot a real human skull perched above the bed in the treasure room when the ride begins.

The King Arthur Carousel is older than anything else at Disneyland. The ride was originally built in 1922 for Toronto's Sunnyside Beach Park.

15) The Most Expensive Souvenir

Made with more than 28,000 Swarovski crystals, passengers can purchase a crystal replica of Cinderella's Castle to complete their magical dreams. Simply stroll into Crystal Arts on Main Street (or order it online) and drop $37,500 to make it yours.

16) Drawbridge to Your Dreams

The Sleeping Beauty Castle is the only Disney theme park castle with an operable drawbridge. However, staff has only lifted the drawbridge for two occasions throughout the years: the castle's opening day and after the remodeling of Fantasyland.

While waiting in line for the Indiana Jones ride, you can view real props from the movie franchise.

One of the best secret Disney facts includes an upscale club in the park. You may never get to see it, but Disney used to entertain at Club 33 in the center of New Orleans Square, and the restaurant continues to operate as a speakeasy. Visitors who receive an exclusive invite take a winding staircase to the five-star speakeasy. Further, it's the only place in Disneyland that serves alcohol.

Disneyland has only experienced three unscheduled closures: the national day of mourning after JFK's assassination, the 1994 Northridge earthquake, and 9/11.

As the first tubular steel roller coaster worldwide, the Matterhorn still reigns as a quality coaster. In addition, rumors surrounding a basketball court inside of the Matterhorn are true. However, the court is strictly for employees to blow off some steam.

Visitors are never more than 30 steps away from a trash can, so there is no excuse to litter. 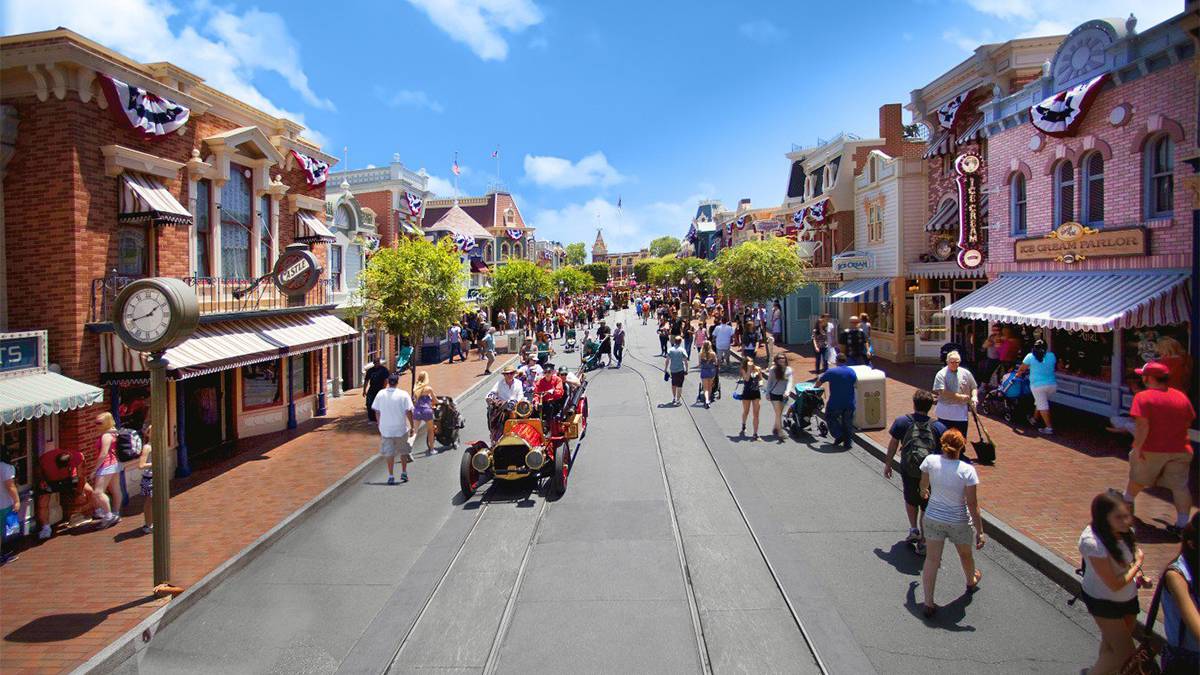 According to the LA Times, by 2017, about 400 million people had ridden Pirates of the Caribbean since it opened in 1967.

For the park's 40th anniversary on July 17, 1995, Disney buried a time capsule at the entrance of Sleeping Beauty's Castle. The capsule is set to be unearthed on July 17, 2035.

While waiting in line for the Star Tours ride, passengers can hear a page to a "Mr. Egroeg Sacul," which is George Lucas' name spelled backwards. Further, Lucas actually attended the opening day of Disneyland at age 11.

The voice of Frosted Flakes' Tony the Tiger and the famous "Mr. Grinch" song in the animated film voices many of the park's attractions. You can hear Thurl Ravenscroft's voice on rides such as the Mark Twain River Boat, the Haunted Mansion, and It's A Small World.

One of the craziest Disneyland facts: the park opened after only a year of construction, costing $17 million.

Built on an orange grove, park landscapers attempted to make up for the 12,000 displaced orange trees by planting dozens of flora species throughout the park that are frequently replanted. The Jungle Cruise alone boasts  700 exotic trees and over 40 species of flowers.

How Many of These Disneyland Facts Did You Know?

While this guide doesn't include all of Disneyland facts one can learn, we hope you've gained a deeper affection for the park's history. Naturally, there are plenty more secrets and lesser-known facts to uncover about Disneyland. What's the best way to discover them on your own? Head to the park with your loved ones! Purchase your Disneyland tickets from Tripster Los Angeles and start planning your vacation today.