When you visit Washington DC, you gain a first-hand look at America’s capitol.

Here, you’re surrounded by a wealth of things to do from historic attractions to educational museums. This city is defined by its governing seat—after all, the president lives here! As such, any visit requires an up-close look at Washington DC landmarks that are iconic to America’s history and heritage. During your trip, these are the must-see landmarks you don’t want to miss!

Obviously, the White House ranks high as one of the top Washington DC landmarks you’ve got to see during your trip. Touring the interior of the White House does take some advance planning. As such, public tour requests must be made through your member of Congress and submitted up to three months in advance and no less than 21 days prior to your visit. If you’re lucky enough to get a tour spot, you’ll fain access to the following:

If you’re unable to secure a tour spot, going to 1600 Pennsylvania Avenue is still worth your time. After all, you can’t visit Washington DC without seeing the White House in person! 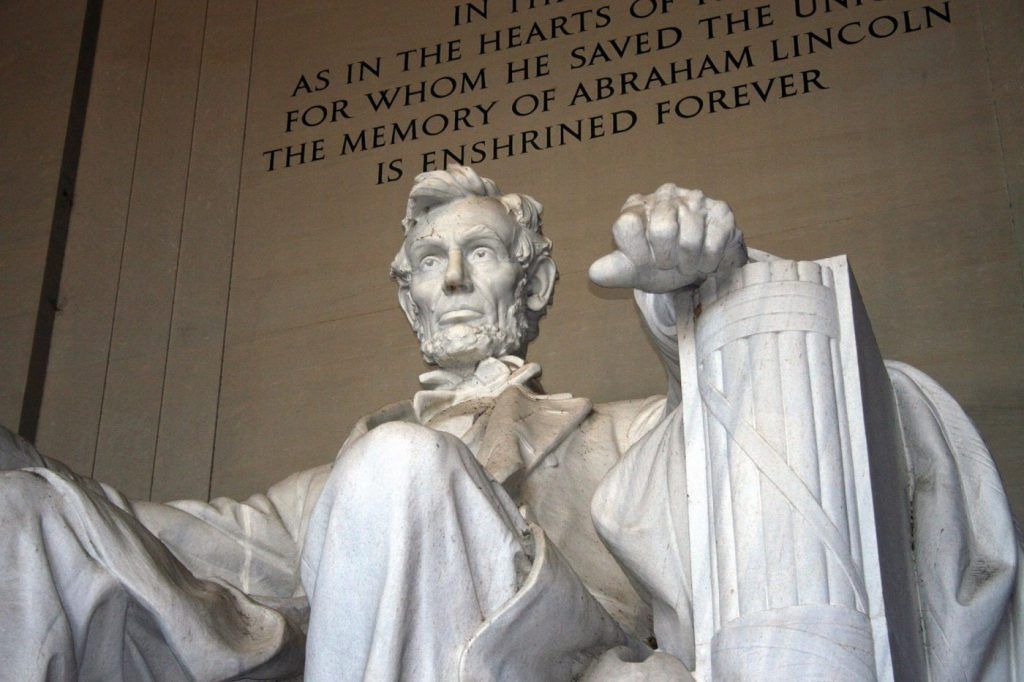 The Lincoln Memorial is one of the most popular attractions in Washington DC.

The Abraham Lincoln Memorial is the 5th most visited National Park Service site in the country. In fact, over 7 million people visit the memorial annually. And, for good reason! This neoclassical monument to America’s 16th president is an imposing sight to behold. With a 19-foot statue of Lincoln perched above the Reflecting Pool and Washington Monument, it’s as if this revolutionary president still presides over Washington DC. Moreover, the Lincoln Memorial has been the site of many historic moments. Among them was the delivery of Martin Luther King Jr.’s “I Have a Dream” speech in 1963.

Related:  Christmas in Washington DC: 17 Festive Ways to Have Fun

Pay tribute to our nation’s greatest generation with a visit to the World War II Memorial. This memorial, built in 2004, features 56 pillars. Each symbolizes every state and territory that participated in the war as well as one for Washington DC. 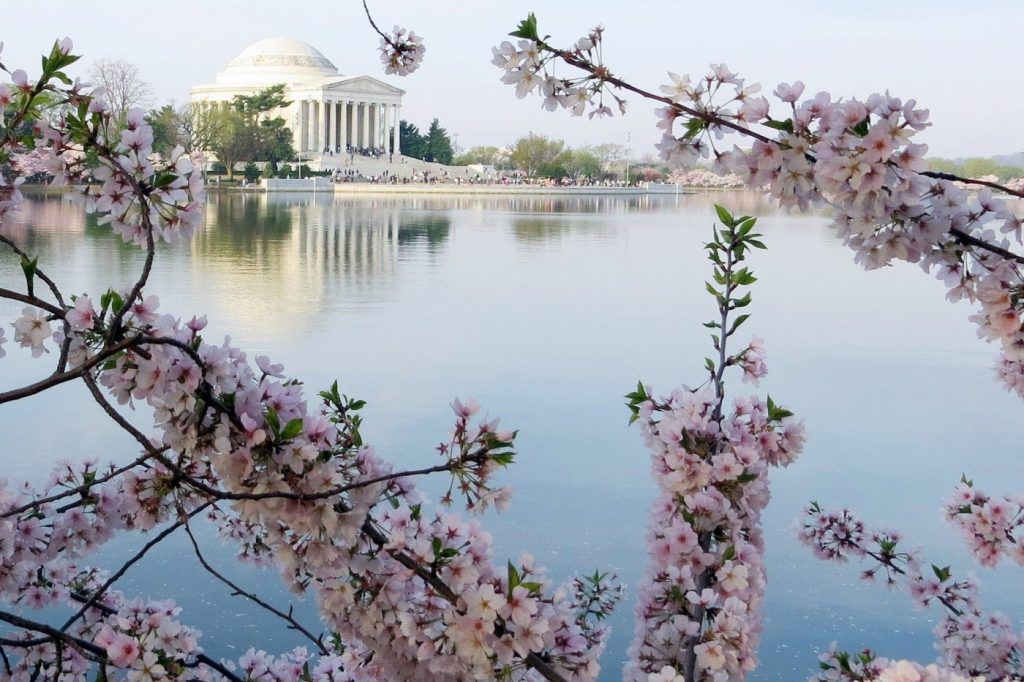 The Jefferson Memorial framed by cherry blossoms is a beautiful sight to behold.

The Thomas Jefferson Memorial is one of the most iconic Washington DC landmarks. Modeled after the Pantheon in Rom, this outstanding piece of architecture serves as a symbol of liberty. Its features include marble steps, Ionic columns, and a bronze statue of Jefferson. In addition, the interior walls are inlaid with excerpts from his famous letters and speeches as well as the Declaration of Independence. Of course, one cant' forget to mention the beautiful cherry blossoms that bloom near the memorial during the spring. During this time, the memorial becomes even more of a must-see site!

This unique Washington DC landmark pays tribute to the 32nd President of the United States. As Roosevelt served four terms in office, it’s only fitting that his memorial is divided into four outdoor rooms. Each represents a term in office, with statues and murals symbolizing issues FDR faced, from the Great Depression to WWII. In total, this sprawling 7-acre memorial is the largest presidential memorial on the National Mall.

One of the newer Washington DC Landmarks, the Martin Luther King Jr. Memorial has already become a popular site to visit for both locals and visitors. Sculpted by renowned artist Master Lei Yixin, the inspiration for the memorial design is a line from King's "I Have A Dream" speech: "Out of the mountain of despair, a stone of hope." 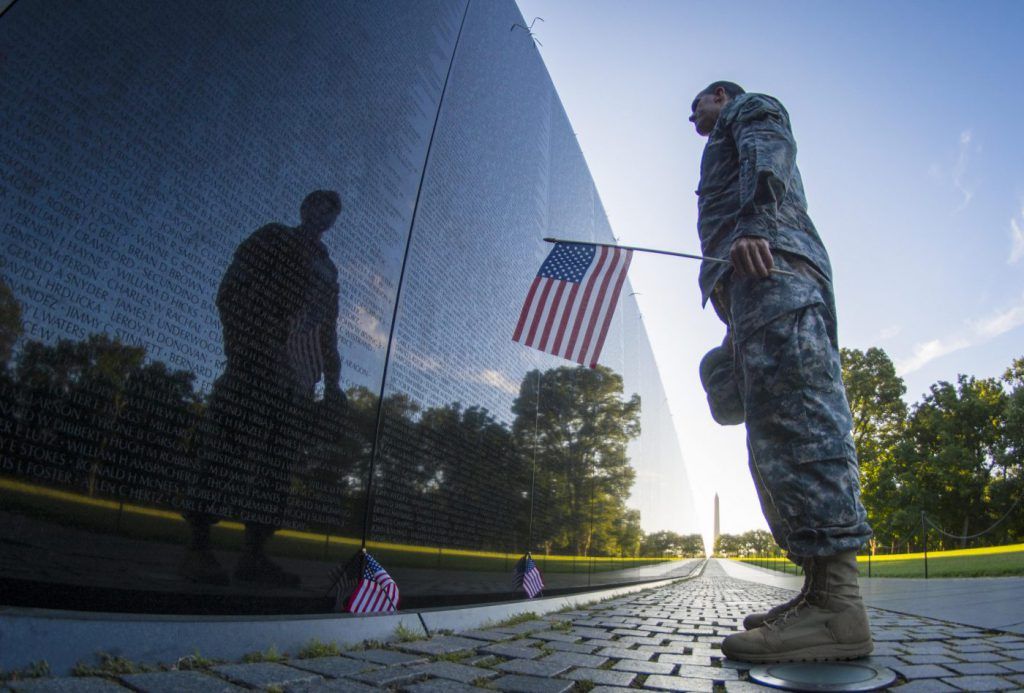 Members of the armed forces who fought, died in service or were listed MIA during the Vietnam War are honored at this memorial. Divided into three distinct sections—Three Soldiers statue, the Vietnam Women’s Memorial and the Vietnam Veterans Memorial Wall—this memorial attracts around 5 million visitors annually. The Memorial Wall, with its black walls and lack of decoration, has become a place to grieve, remember, and heal the wounds of the war.

Dedicated in 1995, on the 42nd anniversary of the armistice that ended the war, this memorial consists of 19 statues of soldiers. Each represents a squad on patrol and symbolizes each branch of the Armed Forces. Strikingly, the 19 solders create a reflection on the wall. This reflection represents the border between North and South Korea. Additionally, there is a Mural Wall with almost 2,500 photos of those who served in the Korean War.

Standing at 555-feet, the Washington Monument is the world’s tallest freestanding stone structure. This iconic stone obelisk is one of the nation’s most recognizable features. In fact, it defines the Washington DC skyline. Built to honor America’s first president, George Washington, visitors can’t miss this landmark as it’s located in the center of the National Mall.

Related:  12 of the Best Things to Do in NYC in the Summer

Speaking of the National Mall, many of the memorials mentioned here are located in and around the Mall. As such, it’s a Washington DC landmark in and of itself.

Across the river from Washington DC, in Arlington, Virginia, you’ll find Arlington House & Arlington National Cemetery. The former serves as the memorial to Robert E. Lee while the latter is a vast military cemetery featuring JFK’s eternal flame, Memorial Amphitheater & Tomb of the Unknowns.

Famous as being the location of Abraham Lincoln’s assassination, Ford’s Theater offers museum exhibits, live theatre, and immersive learning. During a visit here, you can learn more about the president’s assassination as well as get an inside look at the effect it had on our nation.

Serving as the home of the Senate and House of Representatives, the U.S. Capitol building is not only architecturally impressive but a symbol of American democracy the world over. This National Historic Landmark is open to the public and guided tours are held Monday-Saturday. Keep in mind, these guided tours explore the Crypt, the Rotunda, and National Statuary Hall. A separate pass is required to access the Senate and House chambers.

So Much to See in DC

Touring these incredible Washington DC landmarks is a vital part of any trip. However, you probably won't be able to see them all in one trip. As a result, you'll have to pick your favorites and go from there. Our recommendation: start at the National Mall and see as many of the landmarks that are nearby as possible. Then, spread out and try to tackle the rest!