26 of the Most Unique Things to Do in Chicago

When you visit Chicago, there’s no shortage of things to do. From the iconic Bean at Millennium Park to the shopping and museums found on The Magnificent Mile, this city can keep you busy.

However, after seeing the major tourist attractions, you may be curious about what else to do in the Windy City? If you're looking to explore some of Chicago's off-the-beaten-path gems, put our guide to use. We'll show you all of the unique things to do in Chicago you don't want to miss!

It's no secret Chicago has a thriving culinary scene. But, you might not know about the city's French Market. With over 30 vendors, including those featuring French ingredients and dining-in options. As well as food on the go, this market is an ideal place to indulge in French cuisine. Conveniently, Chicago's French Market is open Monday-Saturday.

The Garfield Park Conservatory is a favorite place for locals. However, many visitors tend to overlook this botanical museum. Big mistake! Huge. This enchanting conservatory is one of the largest in the nation. As such, it is filled with plants, flowers, and trees, creating a beautiful respite from the hustle and bustle of the city.

It's also a great place to escape the cold during the winter months. Of course, the Fern Room is a highlight any time of year. However, if you visit during the summer months, the 12-acre outdoor space is also a gorgeous retreat. Best of all, visiting Garfield Park Conservatory is free!

When it comes to unique things to do in Chicago, SafeHouse Chicago is one of the most engaging. This nightclub and restaurant duo is dedicated to the world of espionage. As a result, every aspect of visiting is steeped in secrecy, including the location of the front door. (Hint: Look for a red door.)

Once inside, the theming of the SafeHouse is over-the-top. So much so it's been deemed one of the most Instagrammable places in Chicago. Along with the spy-related theme comes a delicious food and craft cocktail menu. This element of the restaurant is hardly a secret, though!

Big Joe's hosts turtle racing every Friday night, an event that is more interesting than it may sound. People get into cheering on their turtle racers, and anyone can join the fun. Purchase a pitcher of beer, and you'll be assigned your turtle contestant.

Then, watch as the turtles race (slowly) towards the finish line. Strange? You bet. But, it's sure to be a memorable Chicago experience.

A visit to Chicago and a ride on the "L" train go hand in hand. However, on the "L" Tour, the focus isn't simply getting somewhere—it's the journey. This is an excellent way to tour the city as locals do. We recommend the Loop Tour as it offers the best views.

Names after L. Frank Baum, author of The Wonderful Wizard of Oz, this park is located in Chicago's Lincoln Park neighborhood. It ranks as one of the best unique things to do in Chicago thanks to its impressive statues of Oz characters such as Dorothy, Tin Man, Scarecrow, and Cowardly Lion.

Even though there's no yellow brick road, the park is still an excellent place to play around and act like a kid again.

Does having a few drinks and watching cult classic movies sound like a good time to you? If so, you'll want to visit the Vic. On select nights, this music venue turns into a movie house during which visitors are encouraged to drink, chat, and enjoy some movie magic. 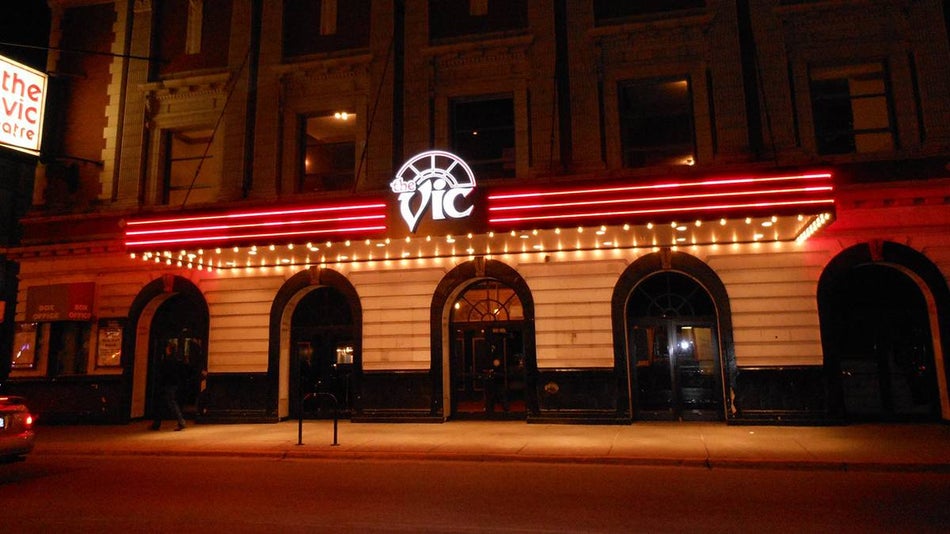 photo credit: Brew & View at The Vic via Facebook

This underground labyrinth of walkaways is deemed one of the unique things to do in Chicago—but also a necessary one. Winter in Chicago can be downright frigid. That's why this subterranean set of walkways even exists—to get walkers out of the cold.

The Pedway links 40 blocks of Chicago, connecting train stations skyscraper sand stores. It's a crucial transportation route for surviving a Chicago winter. And, an unusual site even a summer visitor can appreciate.

Chicago's world-renowned museums are no secret. However, if you've already seen the famous works at the Art Institute, you can continue your exploration of art at the Smart Museum. Home to pieces by Degas, Matisse, Rodin, and others, this Hyde Park museum is small yet charming.

This museum is unique for several reasons. The most notable is its location inside the Michigan Avenue Bridge. As a result of its location, many people have no idea it even exists.

Go inside, though, to view the Michigan Avenue Bridge from below. In addition, you can get an inside look at the Chicago River's bridge system.

This experimental theater group has the longest-running late-night show in Chicago, Too Much Light Makes the Baby Go Blind. If the name is weird, just wait for the concept.

The interactive show stages a dozen or so improvised comedy sketches in the span of an hour. As a result, the show is wildly chaotic, unpredictable, and entertaining.

As the oldest house in Chicago, built in 1833, this former farmhouse now resides on the National Register of Historic Places. During the home tour, which features a museum, you can read excerpts from the diary of one of the daughters that once lived here.

Any fan of photography should visit the Chicago Photography Center. Highlights include interesting exhibitions, photography boot camps, lecture series, and more. Oh, and did we mention wine is available?

On Devon Avenue, you'll find the Desi Corridor. This section of Chicago is known as "Little India" and is one of the biggest Indian, Pakistani, and Bangladeshi communities in North America. This is where you want to go to fill up on curry, saris, and other Indian specialties.

Related Post: A Weekend in Chicago: How to Make the Most of 2 Days

Tucked away in a quiet corner of Hyde Park is the quaint Osaka Japanese Garden. Reachable only by footbridges, this peaceful retreat features quiet pools, gardens, and a replica of Kyoto, Japan's Phoenix temple.

Just south of the Adler Planetarium is a 120-acre peninsula jutting into Lake Michigan. This island that's not quite an island is dedicated to all things nature, with gorgeous walkways and stunning views of the Chicago skyline among its most notable features.

Many people attend a Second City comedy show while in Chicago. However, while it's great for laughs, it's hardly an off-the-beaten path.

When it comes to comedy, unique things to do in Chicago include attending a Chicago Underground Comedy show. This alt-comedy club highlights stand-up acts as well as sketch comedy. And, it has no regrets about the punchlines it pulls.

Head to the Pilsen, a diverse Mexican-American community, to view the Pilsen Murals. The colorful, larger-than-life murals first attracted an audience In 1976. Since then, the murals have continued to transform. Depicting everything from politics to society.

Chicago once had a thriving printing industry. Although those days have long passed, visitors can still explore the section of the city once dedicated to this industry-South, Dearborn Street. While here, browse in bookstores, stop in for a coffee at a local café, and take time to view the murals on the Franklin Building.

This gothic-inspired chapel was donated to the University of Chicago by John D. Rockefeller. It boasts stunning architecture, a 72-bell carillon (the second largest in the world), more than 100 stone sculptures, and ornate stained-glass windows. 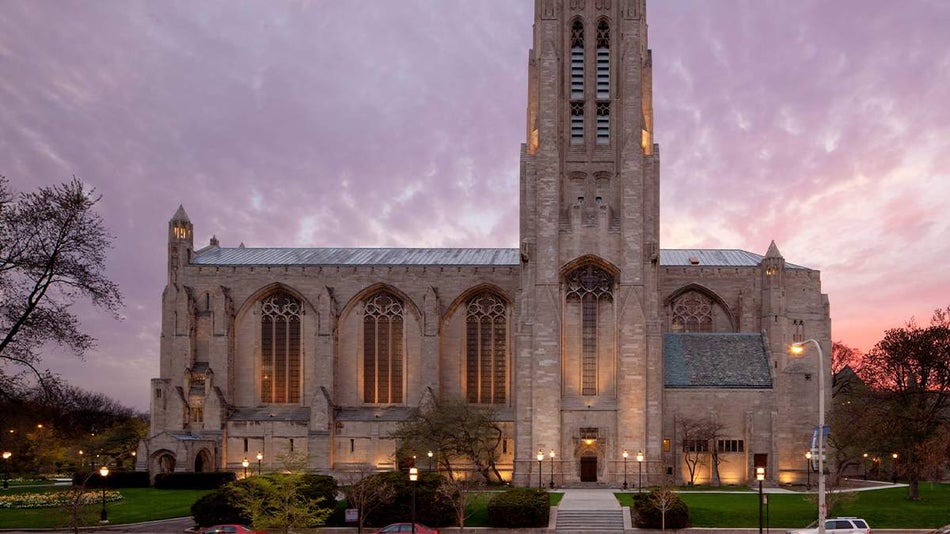 As far as unique things to do in Chicago, visiting its cemeteries is undoubtedly one that's not only unique but a bit atypical. But, visitors do find Chicago's cemeteries fascinating thanks to their impressive tombstones, landscaping, and historical significance. The two most famous cemeteries in Chicago include Graceland and Rosehill.

To experience marvelous views of the downtown Chicago skyline without the crowds, visit Promontory Point. This man-made peninsula juts out into Lake Michigan, providing the perfect perspective on the city. Designed by famous Chicago architect Daniel H. Burnham, it's a natural retreat ideal for leisure time. 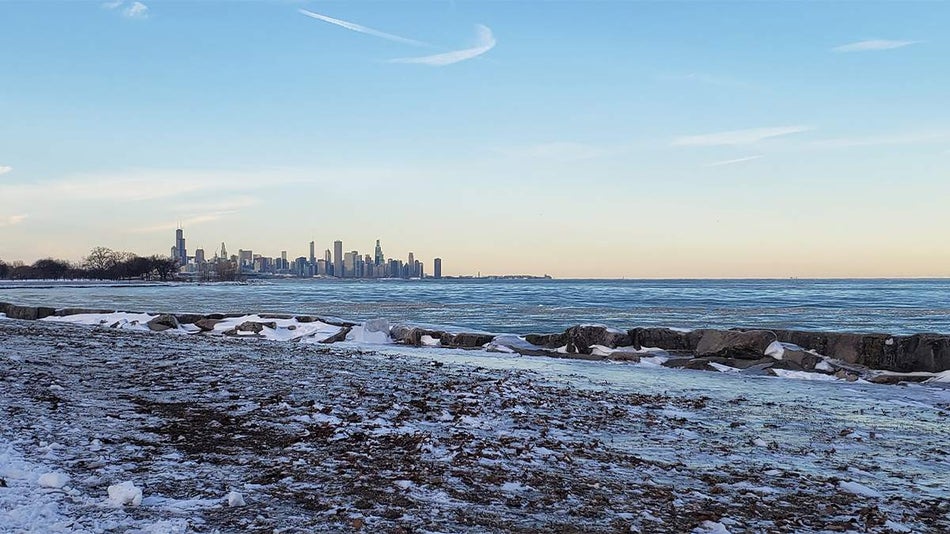 The Chicago culinary scene includes tasty food trucks serving everything from sandwiches to tacos to gourmet mac and cheese. Although far from conventional, Chicago's food trucks are a quick and easy way to dine on delicious food.

A few of the best include Gaztro-Wagon, La Cocinita, and The Southern Mac and Cheese Truck. As food trucks are mobile, there's even a handy website that tracks the trucks and tells you where they will be and when.

This entire neighborhood was built to house the many employees of the Pullman factory, famous for its "Pullman Sleeping Car." As such, it's pretty unique and has become an official Chicago landmark.

Visit to see the extravagant Hotel Florence, go on one of the many walking tours, and learn about the town's exciting history as America's first planned industrial community.

If you're the type of person who could celebrate Oktoberfest all year round, visiting Chicago's Germantown is a must. Officially known as Chicago's Lincoln Square neighborhood), this area of the city boasts cobblestone streets, an authentic German dining hall, old-fashioned shops, and much more.

There are many ways to see Chicago's downtown. However, a river cruise with the Chicago Architecture Foundation ranks among the best. This is especially true for first-time visitors.

During the 90-minute tour, you'll get the real history of Chicago as well as learn fascinating tidbits about its famous buildings. We recommend going at twilight for a truly mesmerizing experience.

Experience the Best Unique Things to Do in Chicago

Now you're ready to experience the best unique things to do in Chicago. From interesting neighborhoods to explore to engaging museums and quirky entertainment, the Windy City offers a little something for everyone.

Which Unusual Activity Will You Add to Your Chicago Itinerary?