Your First Time in San Diego: An Essential Guide

If it’s your first time in San Diego, you might be asking yourself one question: “Where do I begin?” This quandary is a serious one, as this gorgeous Southern California city is teeming with things to do.

As a result, choosing which activities, attractions and neighborhoods should be on our must-see list can be difficult. However, it’s a fun problem to have and one that I’m more than happy to help you solve.

If you think zoos aren’t worth your time you’ve clearly never been to zoo like this! The San Diego Zoo is one of the best zoos in all of America and is a true San Diego gem. More than 3,000 animals call this zoo home representing over 800 species. The zoo strives to replicate the natural habitat for these animals, too. As a result, the zoo grounds are impeccable. A few of the animal’s visitors can see during their day at the San Diego Zoo include elephants, giraffes, gorillas, tigers, polar bears and even giant pandas.

A sprawling cultural hotspot, Balboa Park spans 1,200 acres. In fact, visitors will find the San Diego Zoo here. However, there’s much more than just a Zoo at this park. During your first time in San Diego, be sure to tour the museums and gardens of Balboa Park. Highlights include:

Likewise, it’s always recommended to take in a performance at the Old Globe Theater, modeled after the London theater where Shakespeare’s works were performed.

Skyline in San Diego at Night

At the center of Downtown San Diego is the Gaslamp Quarter. This area is a notable neighborhood worth exploring but the downtown district offers a whole lot more for visitors experiencing their first time in San Diego.

Stroll along the Embarcadero to enjoy views of the Big Bay and to immerse yourself in San Diego’s maritime history.

As you surround yourself with San Diego’s maritime history, be sure to visit this museum to learn about the city’s maritime industry.

Tour the USS Midway to get a glimpse of what it’s like aboard the longest-serving Navy aircraft carrier of the 20th century.

This Bayfront shopping and dining center is an ideal location for lunch as you take in all that San Diego’s downtown waterfront district has to offer.

Vacationers looking for amusement need look no further than San Diego’s theme parks. Each is brimming with fun for families.

This aquatic park encourages guest to go below the surface and connect with ocean life on a whole new level. Guests can feel the rush with Manta®—a high-speed double-launch roller coaster; view real-life sharks up close at Shark Encounter; come face-to-face with playful bottlenose dolphins at Dolphin Point; and much more.

In nearby Carlsbad, visitors can build memories with their families at LEGOLAND®—a park dedicated to all things LEGO! This park is geared towards kids ages 2-12. As a result, it’s extremely popular for families with kids who are typically too small to enjoy theme park rides and attractions. Guests can explore creatively designed areas, including Dino Island, Castle Hill, Imagination Zone, Miniland USA, DUPLO® Village, and LEGOLAND® WATER PARK, as well as themed shopping and dining venues.

For a visitor who is experiencing their first time in San Diego, it’s imperative to know about the city’s unique neighborhoods. Each has a thriving culture and food scene worth checking out. Standouts include:

Coronado is a quaint seaside village that is the epitome of coastal living. During a first time in San Diego trip, vacationers will need to cross the San Diego-Coronado Bridge to access the neighborhoods. During the crossing, enjoy seriously stunning views of North and South Bay. Once in Coronado, though, be sure to unwind with some time at the beach. Afterward, I highly recommend strolling along the Coronado Beach Boardwalk and Orange Avenue. In addition, the historic Hotel Coronado is a can’t miss. Stop here to simply tour the grounds or to have lunch.

The heart of San Diego’s downtown district is found in the Gaslamp Quarter, a 16 ½ block stretch of restaurants, boutiques, art galleries and nightlife. This neighborhood emits a Victorian charm and has a storied history as “red light” district in the 1800s, during which the likes of Wyatt Earp famously gambled here. 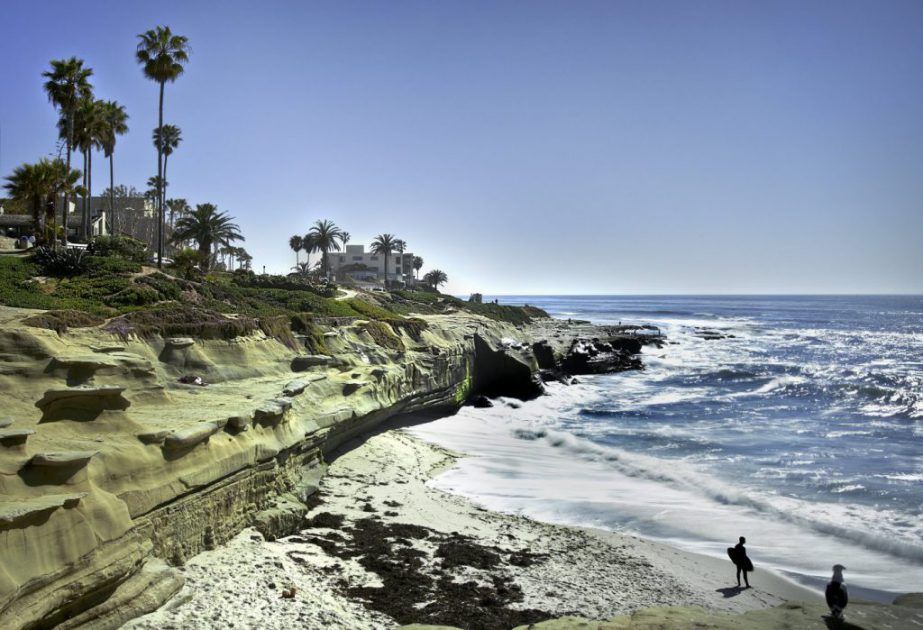 For your first time in San Diego, it’d be a travesty to miss out on the truly remarkable natural beauty this SoCal city has to offer.

Sandy coves, rugged cliffs, and clear, blue waters converge in La Jolla. As a result, encompasses the outdoor appeal of this area more than any other. In fact, its name translates from Spanish to “The Jewel.” One visit here and it’s easy to see why it was given this name. Recommended activities in La Jolla include:

Another idyllic natural attraction worth witnessing up-close is San Diego’s bay. There are several ways to do so.

Hornblower Cruises and Flagship Cruises both offer sightseeing excursions featuring the North Bay, South Bay or a combination of the two. Each cruise guides guests through and around Seaport Village, Point Loma, Cabrillo National Monument, and other points of interest.

A first time in San Diego visit can also include a whale watching tour on the Bay. Gray Whales can be seen December-March, while Blue Whales are typically seen June through September.

A fun way for families to see the best of San Diego by land and sea is on a SEAL Tour. On this tour, amphibious vehicles tour through the San Diego streets before splashing down in San Diego’s Bay.

Getting Around San Diego

If it’s your first time in San Diego, the idea of navigating the city may seem daunting. However, it doesn’t have to be. Many visitors can get around by car easily but if you’d rather leave the driving to someone else taxis, Uber, buses, and trolleys are an option. In addition, a lot if the city’s districts are walkable and bikeable.

San Diego really only has two seasons: summer and winter. Keep in mind, though, San Diego winters are rather mild compared to most of the country. As a result, a winter coast is never a wise packing choice. However, there are several items that will suit a San Diego vacation year-round.

Make the Most of Your First Time in San Diego

By using this guide you’ll be able to discover the best of San Diego. From sunny beaches to thrilling theme parks to historic districts, this SoCal city truly does have it all.