Secret Food Tours presents an inside look at the Dallas culinary scene. While the city is well known for its BBQ and beef, the city has since expanded it’s horizons offering flavors from all over the world. Highlights of the region include southern fare as all as specialty Tex-Mex cuisine. On this tour, a professional guide will lead you to the best food neighborhood, through the artsy streets of Deep Ellum, and, as always, offer a secret dish that will be revealed on the tour.

from Ashley, one of our Dallas Travel Experts
Read More

from Secret Food Tours Dallas
Dallas was just named Bon Appetit's 2019 Restaurant City of the Year, and it was certainly well deserved. Now the country knows what we've known all along — Dallas doesn't mess around when it comes to food. Welcome to "The Big D"!

In Dallas, we're known for our BBQ and our beef, dating back to the days when cattle was king and Cowboys roamed the land, but as you'll find on our Dallas food tour, since then we have expanded our culinary horizons with influences from all over the world, including the development of our speciality Tex-Mex cuisine. This infusion of southern fare with authentic Mexican dishes has people visiting from all over the country just to try our amazing culinary combinations.

Dallas' cuisine has always been a melting pot of cultures who have immigrated here, from Native American and Mexican flavors to Eastern European, South American, and everything in between. We may not know where every bite comes from or who created it but we're always willing to try something new and find our next favourite flavour. On our tour, we'll take you into our best food neighborhood, rarely explored by tourists but home to some of the best local food in the city.

Our guides will lead you through the art-filled streets of Deep Ellum where you’ll get to try our famous BBQ Brisket, a delicious Tex Mex queso - a local favorite, a modern take on the fried chicken biscuit, then we finish with an incredible Pecan Pie. As always, there's our Secret Dish, which will only be revealed on the tour!

Our tour begins in Deep Ellum, Dallas' most culturally significant neighborhood, filled with vibrant street murals and entertainment venues. We'll stop in several of its best restaurants for tastes of iconic Southern fare. Founded as a haven for freed slaves and Eastern European immigrants, the neighborhood developed into a cultural center best known as one of the birthplaces of the Blues. You'll walk past corners where blues legends like Lead Belly would busk between gigs, as well as a meat market that has been serving the community since 1895. In 1914, Henry Ford chose this area for his early automobile plant where the Model T was born, and has now become a music venue called The Bomb Factory. It's close proximity to both Uptown and Downtown make it easy to reach and it's connected to two DART Rail stations.
Read More 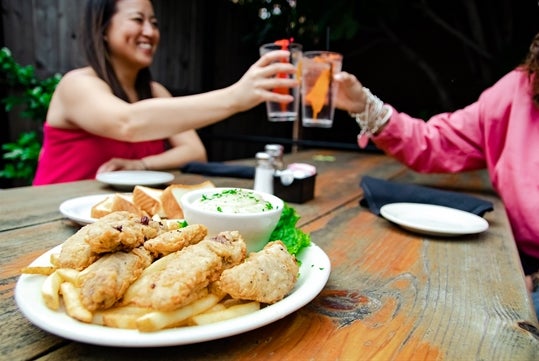 Have you been to Secret Food Tours Dallas? Share your knowledge and be the first to review this.
Write a Review
Back to Top

Is your food tour suitable for a vegetarian or someone with other dietary requirements?
Due to the nature of creating a well balanced and thoughtful gastronomy experience, many of our tours are unable to accommodate certain dietary restrictions.

What should I wear?
Please wear comfortable clothing appropraite for the weather.

Is there a lot of walking?
To join our food tour, you must wear comfortable shoes. There will be around 30 minutes of walking but it's not too difficult and there are no hills or stairs. If you walk slowly, then our guide will walk slowly as well.

Is there enough food during your tour?
Our tours provide our customers with a lot of food. Trust us, you will go home stuffed. No need to eat a meal after our food tour!

Is the tour appropriate for children?
Children are more than welcome to our tour if of an appropriate age to enjoy.

Can I bring my camera?
Yes, there will be plenty of photo opportunities!

What’s included in my experience?
All the delicious food and drinks, but if you want more alcohol (and who doesn't?) We offer a upgraded drinks package that gives you 2 or 3 drinks, tax and tip included.