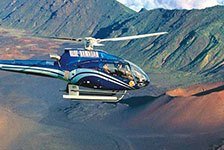 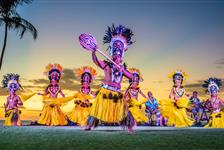 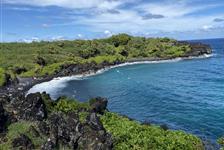 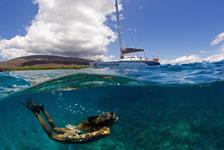 Maui Ocean Center - The Hawaiian Aquarium is not currently available.

Check out our other great Maui Things to Do.
View All Things to Do
Need Help? Contact Us!

A three-acre, state-of-the-art aquarium and marine park, Maui Ocean Center offers a family-friendly and educational experience for guests of all ages. The center is home to 60 self-guided, interactive exhibits with a variety of fish indigenous or endemic to Hawaii, such as Scarlet Cleaner Shrimp, Spotted Eagle Ray, Reef Triggerfish, Flowery Flounder, Red Hawaiian Reef Lobster, and more.

from Ashley, one of our Wailuku, Maui Travel Experts
Read More

from Maui Ocean Center - The Hawaiian Aquarium
Voted Hawaii's "Top Family Attraction"
From the smallest coral polyp to the seven-foot sandbar shark, the intricate wonders of Hawai'i's ocean are showcased in over 60 indoor and outdoor exhibits at Maui Ocean Center. Each exhibit features marine animals living in habitats closely resembling their own natural environment.

The Living Reef
Over 40 realistically-designed exhibits take you on a journey from the rocky surge zone to the edge of the deep reef. See rarely encountered marine creatures: moray eels, octopus, lobsters, sea horses, nocturnal fish and much more!

Turtle Lagoon
Get up close and personal with Hawaiian green sea turtles at this outdoor two-view exhibit. See the animals from above the water, as they surface to breathe, or from a below-viewing window for a unique view of these beloved creatures. Maui Ocean Center's sea turtles are part of a hatch-and-release program and will eventually be released in the wild.

The Tide Pool
Get a hands-on feel for Hawaii's invertebrates at the Tide Pool. Constructed in the form of an ocean rock pool, the Tide Pool holds a variety of harmless marine animals.

Marine Mammal Discovery Center
See the world from a whale's point of view! The new exhibit retains a few of the humpback whale displays, while several new features focus on the various species of dolphins and whales found in Hawaiian waters, plus the state's most endangered marine mammal, the monk seal. The 3,000 square-foot exhibit includes several interactive displays and graphic boards on marine mammals, life-size models of a monk seal mother and pup in a realistic beach setting, and the most dynamic new exhibit, the Bubble Net.

Sea Jelly Gallery
Watch moon jellies as they appear to dance before your eyes in a stunning floor-to-ceiling cylinder, perhaps the aquarium's most soothing exhibit. Their gentle pulsating and pumping prevents the jellies from sinking while increasing the likelihood of it capturing prey in its stinging tentacles.

The Open Ocean
A 54-foot-long clear acrylic tunnel transports you through this underwater realm, providing a 240-degree view of nearly 2,000 fishes, while stingrays slide overhead and sharks look visitors in the eye. This 750,000-gallon salt-water aquarium is the largest in the state. 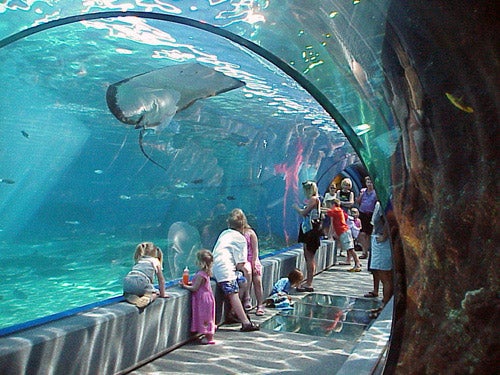 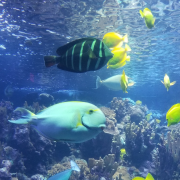 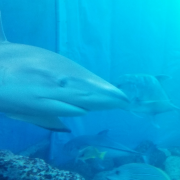 How much is parking?
Parking is complimentary and available in front of the Maui Ocean Center off Hwy 30.

What time is the last entry?
Maui Ocean Center allows entry until closing. However, please be aware that all buildings will close promptly at 5:00 pm (or 6:00 pm with extended summer hours in July and August). Please a lot yourself enough time to view exhibits and presentations at your own pace.

Is the aquarium outdoors or indoors?
Approximately 75% of the Aquarium exhibits are indoors and air conditioned, making it the perfect attraction for anyone, anytime! Located in Ma‘alaea Harbor, the Aquarium also provides spectacular ocean views.

Do you have any scheduled shows or feedings?
Maui Ocean Center displays the animals in our care in realistic, natural environments and the animals are fed according to their needs, therefore feedings and shows are not offered.

Do you have strollers or wheelchairs available?
Wheelchairs are available on a first come, first served basis. Maui Ocean Center is ADA compliant. Strollers are currently not available.

Can I get into the gift shop without paying admission?
Yes! For entrance to Maui Ocean Treasure gift shop, you may enter through the Front Gate.

Can I get into the restaurant without paying admission?
Yes! To enjoy a delicious lunch at Seascape Ma‘alaea Restaurant, you may enter through the side entrance adjacent to the Ma‘alaea Harbor Shops.

Do you have audio guides available?
Yes, they are available at the Front Gate. It’s like having your own personal tour guide with you and we highly recommend them. Audio guides are $3.00 for a single unit or $8.00 for 3-6 units and are available in English.

Do you have a dress code?
Yes, shirt and shoes are required at all times and all clothing appropriate for a family environment.

Do you have a smoking policy?
In accordance with Hawai‘i state law, Maui Ocean Center is a smoke-free facility. With your admission receipt, you can exit the Front Gate and smoke outside of the facility, at least 30ft from any windows or doors, and return to the Aquarium.

Are pets allowed?
No, only leashed service animals are allowed.

Can I bring drinks or outside food?
For your safety, absolutely no outside food or beverage (of any type) are allowed at Maui Ocean Center. No coolers allowed. Exceptions can be made for infants and school groups (with prior approval) and those with special medical needs; see a Front Gate attendant. Please, no chewing gum.

Can I take photos and video?
Photography and video are permitted throughout the park for personal enjoyment only.
Back to Top