On my last trip to the Neon Capital of the World, I was fortunate to receive tickets via Tripster to Madame Tussauds™ Wax Museum. Located on the Las Vegas strip at the Venetian® casino resort, the museum premiered in 1999 and was the first Madame Tussauds venue to open in the United States.

If you haven't checked out the five-star Venetian, it's one of my personal favorites and one of the more glamourous hotel/casinos on the strip, complete with indoor canals and singing gondoliers.

Modeled after the city of Venice, the hotel includes the famed Grand Canal Shoppes, 25-foot-high columns made of solid Botticino marble, and ceiling frescoes hand-painted by Italian artists. 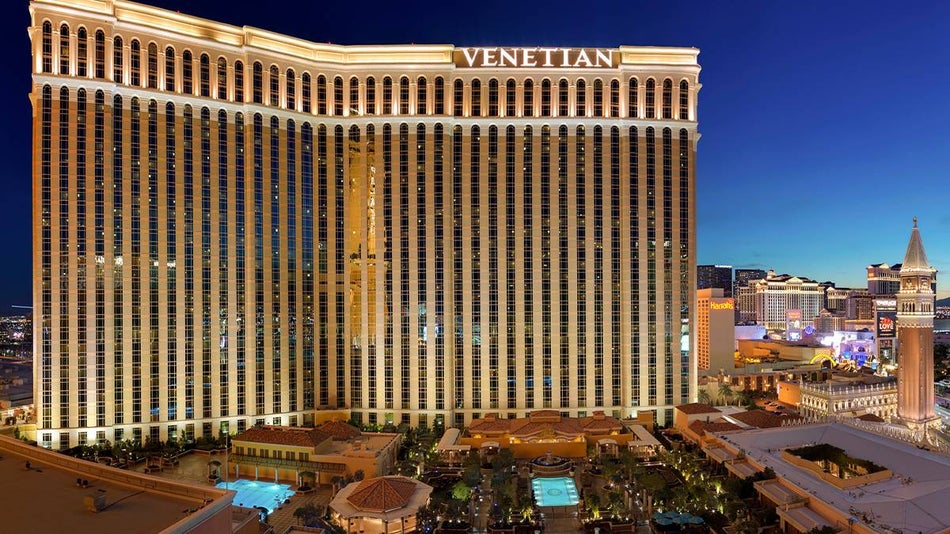 I enjoyed my first visit to the World's Greatest Wax Museum immensely. Not only was the Tussauds' team gracious enough to show me around, but I received a behind-the-scenes look at the inner workings of the wax-making process-and; let me say, I was blown away. The intricacies, the detail, the research, and the thought process are truly a form of artistry.

The Making of a Wax Figure

Over 250 measurements and 180 photos are taken of the head and body during an average celebrity sitting. The person's weight, height, and mannerisms are calculated, as are the skin tone, hair color, and eyebrows are matched perfectly with natural human tresses. I learned it takes 140 hours to insert the hair on an average wax head.

Fun Fact: Approximately 17 million flowers are needed to produce enough honey to make one pound of beeswax, the most environmentally friendly renewable source of wax.

Team members showed me the incredible wax-making procedure, which takes four to six months. After the celebrity is chosen through surveys and other means, researchers recreate the features and persona of the characters they are replicating. Sometimes, but not always, the celebrity is involved with the process and has a session scheduled with Madame Tussauds' stylists.

One Las Vegas team member compared the Tussaud honor to having your star on the Hollywood Walk of Fame. Celebs rarely refuse, and some are more interested in the method than others. For example, I learned the Kardashian family is very involved with their wax figures. 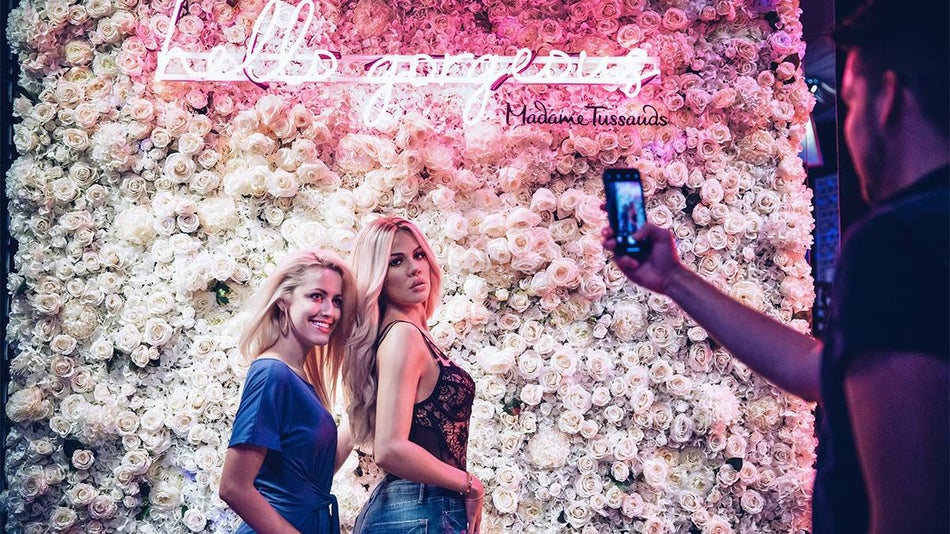 Khloe Kardashian did a photo session and helped the team choose her shoes, jeans, top, and hair color. Gwen Stefani also worked with wax figure designers. Some celebrities like Fergie of the Black-Eyed Peas donate their clothes to add authenticity.

Fun Fact: Those aren't authentic $2,595 Christian Louboutin shoes on Khloe Kardashian (though the replication is incredible). Unfortunately, theft is an issue for the museum, despite the numerous security monitors.

When I first entered the playground of celebrity fun, my eyes locked with the world's biggest heartthrob (insert heart eyes emoji), the one, the only Brad Pitt. His intense gaze immediately transported me back to my fan-girl days of him in Legends of the Fall and Oceans Eleven. 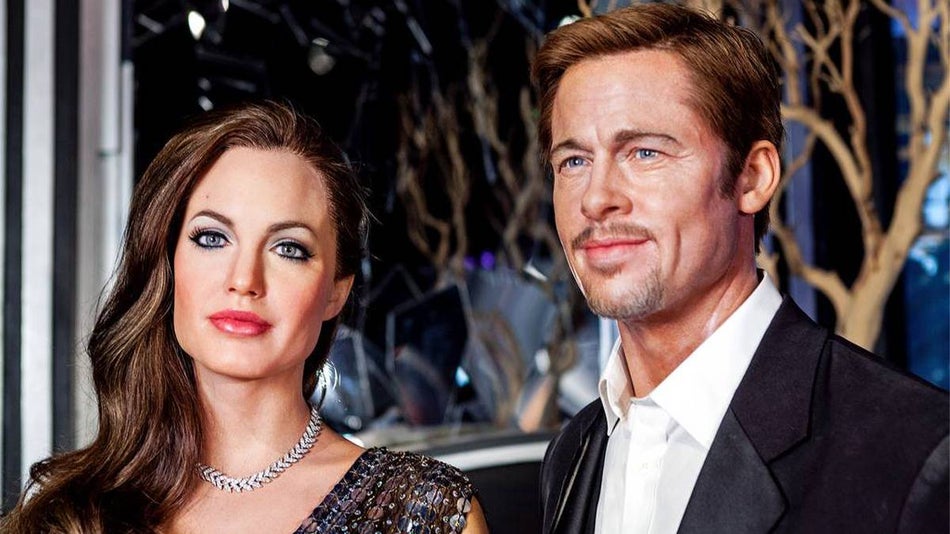 Photo Alert: You can "Come in Like a Wrecking Ball" and recreate your own music video on top of a wrecking ball beside songstress Miley Cyrus. Photos are encouraged throughout the museum, though staff members ask patrons to respect the wax figures.

Hairstyles, facial expressions, tattoos, and clothing preferences are all considered by stylists. Tussauds' artists use oil-based paint to create a realistic skin complexion. In addition to wax, the builders use clay and steel. 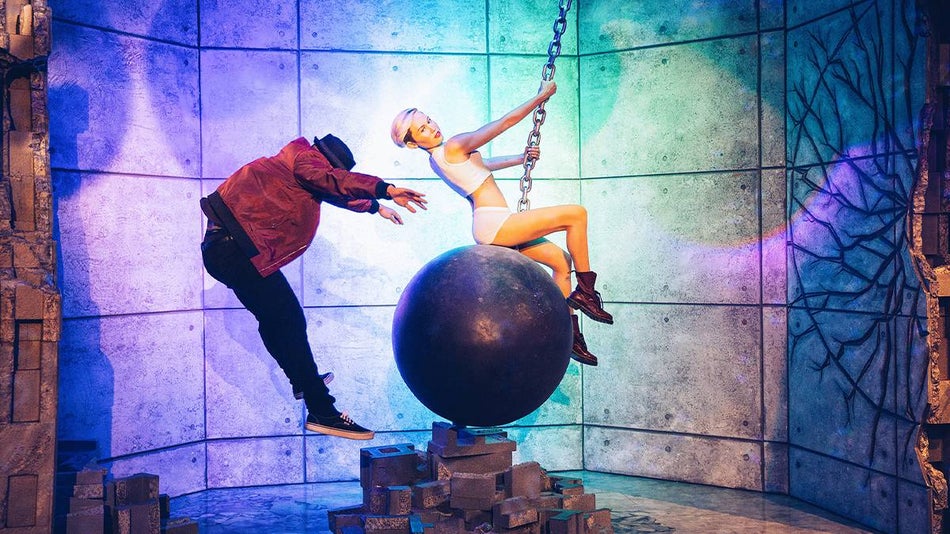 Next, I entered a unique exhibit exclusive to Madame Tussauds Las Vegas, the Hangover Bar Experience. The first Hangover film, a truly original cult classic, is one of my favorites, so this was a real treat.

Photo Alert: A Wolf Pack shot is a must for any true fan. ("This isn't the real Caesars Palace, is it?")

Related Post: 13 Best Vegas Bachelor Party Ideas: How to Plan and Where to Go

Pro Tip: Admission to Madame Tussauds is required to enter the bar, and beverages can be purchased a la carte or with a ticket combo package that includes either one cocktail or a half-hour of open bar service.

Next, I stepped into the iconic Hangover penthouse suite, a hilarious rendition from the notorious night-after movie scene. There I fist-bumped Mike Tyson and had one or two other surprises I won't spoil for you. (Hint: "What do tigers dream of when they take a little tiger snooze?") 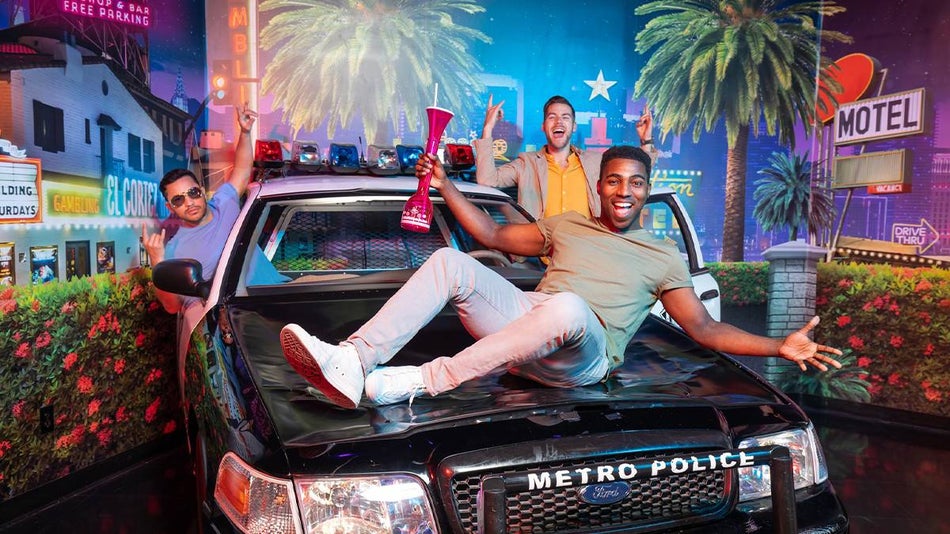 Photo Alert: Shock your friends with a snapshot in front of the Vegas wedding chapel with your main squeeze or Zach Galifianakis. Anything can happen in Vegas, baby!

The museum also has a 4D-experience movie theater showcasing the Marvel Super Heroes in action. Get ready for some interactive fun with the Marvel Hall of Heroes!

There's also the Wax Hands display exhibit where visitors can dip their hands into a vat of wax. Famous framed hands include the Rock, Janet Jackson, Stevie Wonder, Eric Clapton, and Lou Reed.

Fun Fact: Be on your toes; REAL celebs sometimes pose as themselves to trick patrons!

The Las Vegas tour wouldn't be complete without a recreation of the original rat pack-Frankie, Dean, and Sammy behind a white baby grand playing at the Sands. The tail end of the tour includes a Vegas Baby Gift Shop featuring magnets lunchboxes, shot glasses-everything from Yoda bobbleheads to Marvel Comics and Jurassic World t-shirts.

Fun Fact: The most notable U.S. Figure to sit with Madame Tussaud was Benjamin Franklin in 1783 when he served as the U.S. envoy to France. 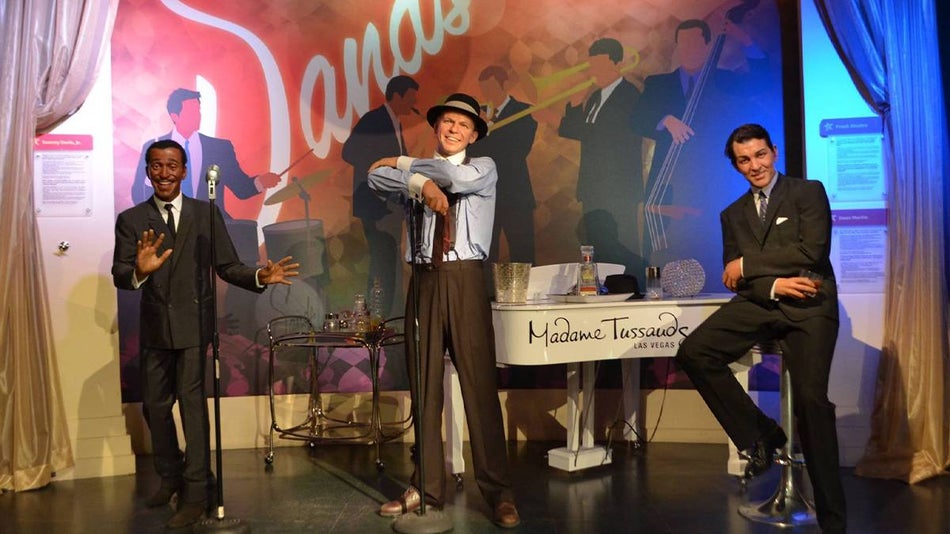 Unfortunately, some more popular figures (Bradley Cooper, Salma Hayek, and Whitney Houston) were under repair due to human recklessness. Though I was privy to learn (and sworn to secrecy) about some new wax figures, debuting in April 2022, and let me say, these will be impressive feats!!

Photo Alert: When you first enter Tussauds Las Vegas, you can get your picture taken by a museum staff member to immortalize your visit. Guests can scan the QR code at the Magic Kiosk if they decide to buy a photo later.

Tell Us, Which Wax Figure at Madame Tussauds Las Vegas are You Most Excited to See?