Insider’s Guide to the 9/11 Memorial & Museum

Those who lost their lives and loved ones in the tragic 9/11 attacks live on through a memorial and museum dedicated to their remembrance.

"No day shall erase you from the memory of time" are the words that echo through the chilling halls of the 9/11 Memorial Museum.

The quote is embedded in steel recovered from the original World Trade Center. It rests in the middle of 2,983 paper panels in every shade of blue, which form an art installation called Trying to Remember the Color of the Sky on That September Morning.

This haunting installation is situated in the 9/11 Museum, which rests below the 9/11 Memorial Plaza. Replacing the twin towers formerly taken down by terrorist attacks, both the memorial and museum exist to pay homage to those who suffered in the tragedy.

The aftermath of the attacks consisted of almost nine months of wreckage cleanup. Afterward, the decision was made to place a memorial in the footprints of the North and South towers rather than rebuild the World Trade Center exactly as it was.

Out of more than 5,000 design proposals entered in an international design competition held in 2003, architect Michael Arad and landscape architect Peter Walker decided the outcome of the World Trade Center with their design called "Reflecting Absence."

Interesting Fact: 9/11 memorial ceremonies are held throughout the country each year, often at various city halls, to honor the lives forever changed by this fateful event.

Guests enter the museum from aboveground on the 9/11 Memorial Plaza. Once belowground, the space designed by architect Davis Brody Bond consists of a labyrinth of poignant artifacts, images, and videos.

Interesting Fact: It typically takes at least 50 years to be deemed historically significant enough to be listed on the National Register of Historic Places. However, due to the significant weight of the 9/11 attacks, the World Trade Center qualified to be on the list in February 2004.

Why You Should Visit the 9/11 Memorial & Museum

Stationed in the exact footprints of the original twin towers, this memorial honors what once stood but is no more.

Before entering the museum, the approximately one-acre reflecting pools outside are fed by waterfalls which collectively make up the largest artificial waterfall in North America. The bronze parapets lining the pools have engravings of the victim's names.

Also outside the museum is the Survivor Tree and Memorial Glade. The Survivor Tree is a tree that survived the attacks and continues to live despite every effort to destroy it -- a sign of resilience.

The Memorial Glade was designed to honor those who were injured or lost their lives due to the aftermath of the attacks, such as responders who were harmed by toxins in the air.

The museum is a 110,000 square foot opportunity to re-walk the events of 9/11, from the day before, to the day of, to the day after the tragic event. The journey through these three sections of the museum is not easy. But, it brings the story to life so that we never forget.

The memorial exhibition, called In Memoriam, allows visitors to get to know those who lost their lives in the 1993 bombing and 2001 terrorist attacks.

Features in the museum include:

Interesting Fact: Cleanup of Ground Zero came to a close on May 30, 2002, when the Last Column was removed. This was the very last piece of World Trade Center steel to be taken out. Today, the Last Column stands in the museum and is covered with signatures and words added by rescue and recovery workers who aided in the aftermath of the calamity. 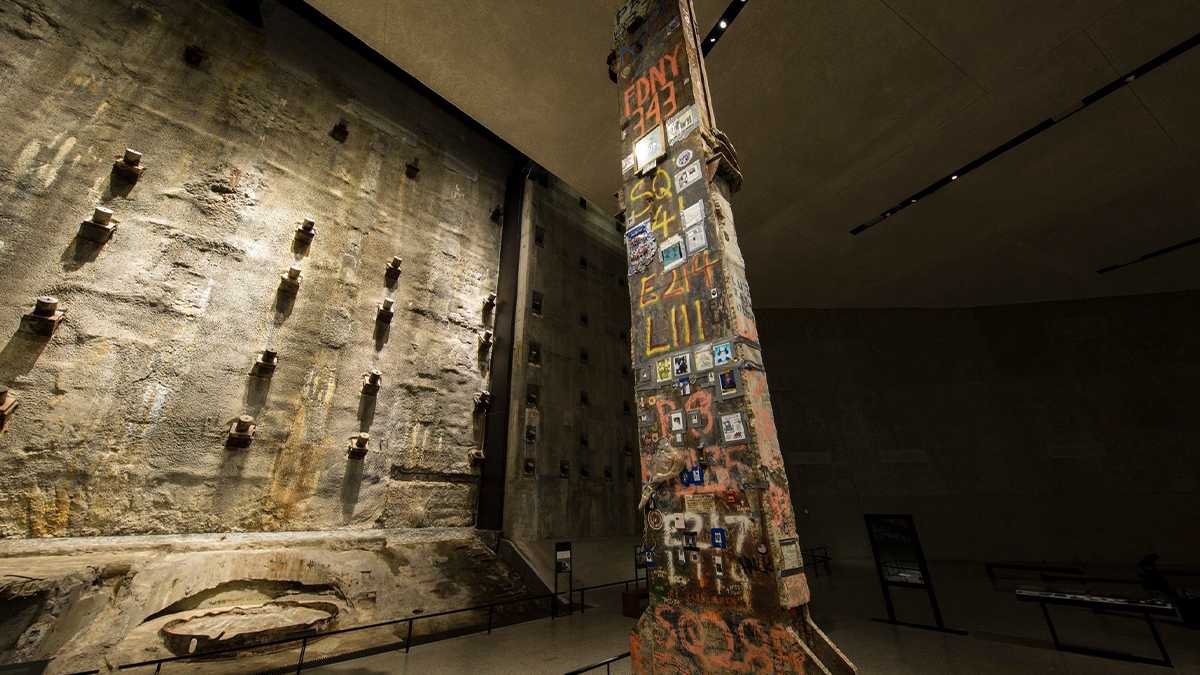 If you're looking to pay your respects at the Memorial Plaza, consisting of the reflecting pools, Survivor Tree, and Memorial Glade, you can do so for free.

If you want a more in-depth look at the 9/11 events, victims, and survivors, you'll need a ticket to visit the museum. You can grab a ticket for $26 to get access to the entire museum.

Pro Tip: Be sure to show up at the time specified on your ticket. Museum staff may not grant access to early or latecomers. Also, keep in mind you cannot re-enter after exiting the museum building.

Honoring those who lost loved ones or were involved in the tragedy, many individuals can get into the museum for free, such as:

Pro Tip: Due to COVID-19, keep in mind specific exhibits are closed at this time, such as the Atrium, the Auditorium, the Education Center, Reflecting on 9/11, Rebirth at Ground Zero, and some alcoves.

Feel free to stroll through the museum at your own pace to thoroughly soak in the moving exhibits. However, this experience is one you won't want to rush. On average, a visit takes about two hours.

Special live talks take place in the auditorium on the L-2 level.

Photo Alert: Photography is permitted at the 9/11 Memorial Museum. However, keep in mind this is a location deserving of utmost respect.

After getting a photo or two, put your phone away. The museum does not allow talking on the phone.

All guests must wear a mask. In addition, all guests 12 and older should come prepared to show proof of vaccination.

When planning your visit to the 9/11 Memorial & Museum, don't overlook adding a restaurant stop to your itinerary. We've scouted out some local places to check out before or after your museum visit.

While you're in New York City, there are a couple of other places you won't want to miss.

To take your experience to the next level, purchase your 9/11 Memorial & Museum tickets along with tickets for the Lower Manhattan Guided Tour. Then, explore Ground Zero and other sites throughout the city, such as Wall Street and Trinity Church. Your guide will give you insider information to bring historical events to life.

After your tour, One World Observatory offers unbeatable views of the Big Apple from a new perspective. This interactive experience is located at the top of the tallest building in the Western Hemisphere, One World Trade Center, on floors 100, 101, and 102.

There are many ways to get to the 9/11 Memorial & Museum. Here are some tips for navigating the bustling transportation paths of New York City. Click here to view a map.

Pro Tip: You can access the memorial and museum at three different places: the intersections of Liberty and Greenwich, Liberty and West, or West and Fulton.

Keep in mind there is no designated parking available at the 9/11 Memorial & Museum, and street parking can be hard to come by in this busy area.

The Battery Parking Garage at 70 Greenwich Street is nearby. SP+ parking facilities offer other parking options, as well. 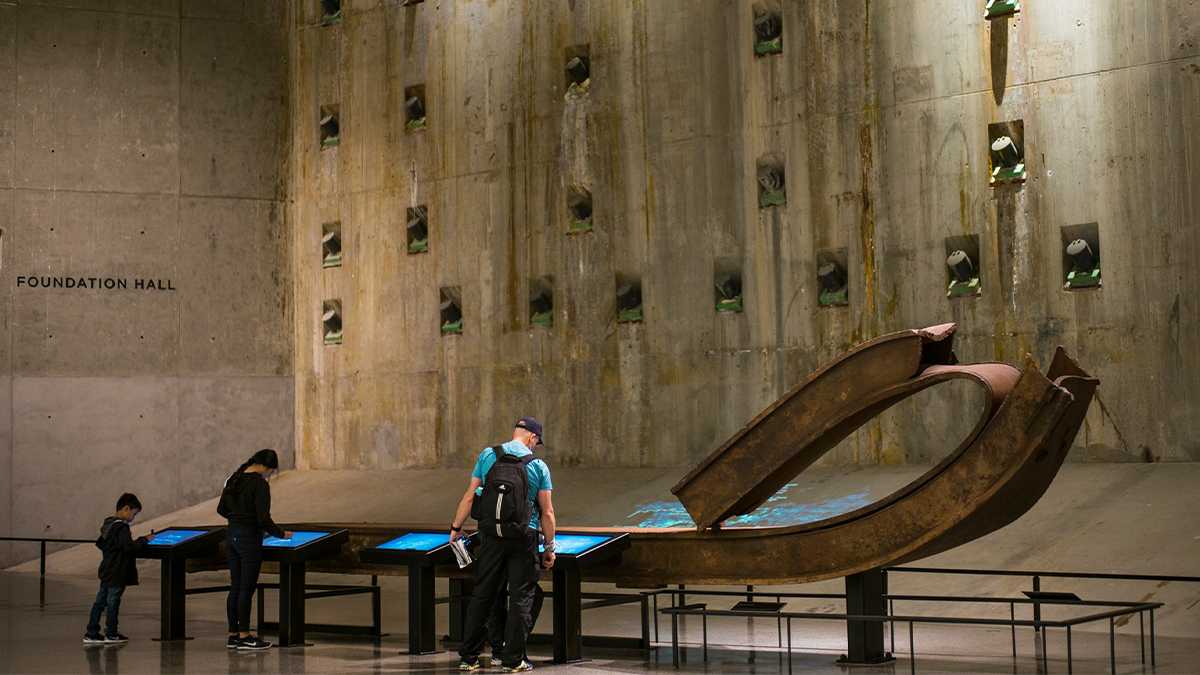 Honor Victims at the 9/11 Memorial & Museum

So many things will never be the same due to this tragic event. The lives of those who lost loved ones. The skyline itself. The entire country. Even so, the temptation to forget history always threatens us.

The 9/11 Memorial & Museum exists to thwart that temptation. Those who were directly and indirectly affected by the 2001 terrorist attacks and the 1993 bombing can find solace in the fact that the stories will live on.

We must always remember so that we can say in agreement, "No day shall erase you from the memory of time."