Experience the culinary scene of St. Augustine, Florida, a city with a rich heritage that has spanned hundreds of years. On this St. Augustine food tour, savor the best food and wine it has to offer as you visit iconic landmarks like the Old City Gates, Castillo de San Marcos, Plaza de la Constitución, and America’s oldest thoroughfare, Aviles Street.

from Ashley, one of our St. Augustine Travel Experts
Read More

Pass by Castillo de San Marcos National Monument at 1 S. Castillo Drive in St. Augustine. See this historic fortification built in the 17th century. The oldest masonry fort in the continental United States, the Castillo de San Marcos is a large Spanish stone fortress built to protect and defend Spain's claims in the New World. It's a National Monument and, at 325 years old, it's the oldest structure in St. Augustine.

Stop at Huguenot Cemetery for 5 minutes, A1A Orange Street, St. Augustine, FL. The Huguenot Cemetery in St. Augustine, Florida, located across from the historic City Gate, was a Protestant burial ground between 1821 and 1884. Prior to the American occupation, the Spanish city of St. Augustine was predominately Catholic, and the only burial ground in the town, the Tolomato cemetery, was reserved for Catholics. Recognizing a need for a formal Protestant burial ground, the new American administration in St. Augustine chose an area just outside the city gate. The first burials occurred in 1821, just before a yellow fever epidemic that claimed the lives of a large number of the city's inhabitants.

Stop at Plaza de la Constitucion for 10 minutes, 1 Cathedral Place, St. George Street, between King Street and Cathedral Place, in St. Augustine. A historic park in the center of downtown St. Augustine. The original city plan was built out from this location. It is bordered by The Government House, the Cathedral Basilica, the Bridge of Lions, and Matanzas Bay. Spain's 1573 Law of the Indies, Leyes de Los Indies, specified that colonial town plans set aside such a plaza for government, church, and public use. Plazas were to begin at the waterfront along coasts- to see and be seen.

Pass by Government House Museum at 48 King Street in St. Augustine. Government House dominates the west end of the Town Plaza, a unique Spanish land use component within a National Historic Landmark District. Plazas were to begin at the waterfront along coasts- to see and be seen. Since 1598, a government building has stood on this site with a view of the harbor landing, accommodating administrative headquarters and residences of colonial governors appointed by the Crowns of Spain, Britain, and Spain again. After Spain ceded Florida to the United States in 1821, this current Government House served as a courthouse and briefly as a Capitol of the new Territory of Florida. 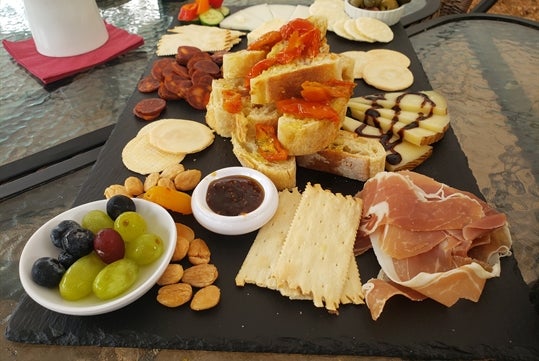 Have you been to The Perfect Pairing: St. Augustine's Wine, Cocktail and Food Experience? Share your knowledge and be the first to review this.
Write a Review
Back to Top

How much walking is on this tour?

This St Augustine food tour lasts approximately 3 hours and 30 minutes but will only cover about 0.7 miles of total walking distance at a relaxed pace.

Where is the meeting point?

The Perfect Pairing Experience meets right in the heart of the historic district on Treasury Street.

Can children come on this St Augustine Experiences tour?

Does the tour run rain or shine?

All tours are held rain or shine. Ponchos are provided if it rains. Please check the weather forecast to help you choose your shoes and garments and see if you need an umbrella.

What is included in the The Perfect Pairing Experience Tour?

This tour includes wine or cocktail tasting at 3 different stops, a charcuterie board, food pairings (vegetarian option available), water service, and an excellent local tour guide for the entirety of your food experience tour. Please note that they can accommodate any special request on the food samples (vegan, kosher, nut allergies, dairy-free, or gluten-free diets). Please note any special requests in the "special needs" section at time of booking, or call the number on your e-ticket prior to your tour.

Valid US ID or passport (for international guests), as they will be checked before the tour. You do not need any printed tickets.

Are there any physical limitations on this tour?

This tour is not recommended for pregnant travelers and guests with heart problems or other severe medical conditions.

Is this tour wheelchair accessible?

Yes, all of the stops on the tour are wheelchair accessible. If you have a wheelchair, please note that some of the streets you will be traveling are cobblestone.

Are there options for those who are hearing impaired?

St. Augustine Experiences has a guide that is a certified American Sign Language interpreter. If you would like to request a deaf-friendly tour, please make a note in the "special needs" section at time of booking, or call the number on your e-ticket.