Explore one of America’s oldest cities with your own private guide. This Boston Freedom Trail walking tour begins at the Boston Common and includes an inside tour of Paul Revere House, the colonial home of the famous American patriot. You’ll briefly step off the Freedom Trail to visit the Boston Public Market for some fresh cider snacks (included).

from Boston’s Freedom Trail: Private Tour including Paul Revere House
As the cultural capital of Massachusetts, Boston is one of the oldest municipalities in the USA, whose past recalls revolution and progression, and today the city remains powered by forward-thinking as a leader in arts, academia, literature, innovation, and entrepreneurship. To sightsee Boston is to visit a city that is one sprawling, historical outdoor museum, and playground.

On your private tour, you will:

In a few hours, on your private highlights tour, you will see the major sights and attractions of the city, including Boston Public Market and Paul Revere’s home (with tickets included).

First, begin your tour in Boston Common, the oldest green public space in America, dating from 1634.

Across the road, the Massachusetts State House, the grandiose structure that is the seat of government for the Commonwealth of Massachusetts, holds court over Beacon Hill where your tour continues. Enjoy the centuries-old cobblestone roads and federalist homes which make this neighborhood one of Boston’s most photographed.

Then, continue down the Freedom Trail to the home of the silversmith and the man who took America’s most famous horse ride. Visit Paul Revere’s home along the trail, and visit the Granary Burying Ground, where several founding fathers are laid to rest.

Your tour continues with a visit to Boston Public Market, where you will enjoy a true Bostonian treat, included in your tour. After, your guide will happily point you in the best direction of the best lobster rolls to try on your own. Your tour finishes in the North End, where your guide will tell you the story of the USS Constitution, before leaving you with ample knowledge on how to continue enjoying your day.

Inclusions:
- A friendly, professional English-speaking tour guide for your own private group
- Plenty of time to take photos of your favourite places
- Entrance tickets to Paul Revere House
- Small local snack (1 per person) 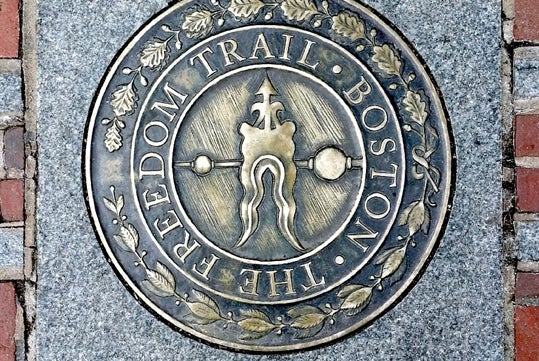 Have you been to Boston’s Freedom Trail: Private Tour including Paul Revere House? Share your knowledge and be the first to review this.
Write a Review
Back to Top

Where does the tour meet?

Your guide will meet you at the entrance to the "Boston Common Visitors Center" located at 139 Tremont St, Boston, MA 02111, United States. Please arrive at least 10 minutes prior to your tour's start time.

What does the tour include?

This tour includes an English speaking guide, entrance tickets to Paul Revere House, a small local snack and plenty of time to take photos of your favorite places.

Wear comfortable shoes as this tour involves a fair amount of walking.

How many people will be on this tour?

This is a private walking tour for just you, your group and your guide. The tour allows for a maximum of up to 12 guests.

Does the tour include transportation?

No, transportation is not included.

A camera, hat, sunscreen and plenty of water are recommended. Dress in warm clothing.