Set foot with your own personal guide on a private Philadelphia walking tour in the birthplace of the United States of America. See iconic sites like the Liberty Bell, the first post office in America and Christ Church Burial Ground where Benjamin Franklin is buried. This kid-friendly tour wraps up with tickets to visit Independence Hall at your own pace.

from Ashley, one of our Philadelphia Travel Experts
Read More

from Private Family Walking Tour: In the Footsteps of the Founders
As the Birthplace of the United States of America and the iconic Stars & Stripes flag, Philadelphia boasts monuments to some of the nation’s earliest significant moments. On this private walking tour, your family will have the classroom brought to life while seeing the places where history was made. On your private tour, you will:


During the American Revolution, Philadelphia was the site of the First and the Second Continental Congresses. After the Revolution, the city was chosen to be the temporary capital of the United States from 1790 to 1800. Though federal and state governments left Philadelphia at the beginning of the 19th century, the city continued for some years to be the nation’s cultural and financial hub. This tour will take you to the Independence Mall, the National Constitution Center, and Liberty Bell on a stroll to the presidential home of George Washington and John Adams.

On this walking tour of the storied Historic District, you and your family will explore Philadelphia’s historic district and learn not only its oft-told narrative but also the complexities of the nation. Learn about Philadelphia’s role in the slave trade, its colonial past, and the development of trade links to claim its rightful place as one of the nation’s most important centers of trade. Your tour ends at the entrance to Independence Hall, the site of the signing of the Declaration of Independence and the U.S. Constitution, in which you will participate in a tour run by park ranger Independence Hall guides.

Please note: The Christ Church Burial Grounds are closed in the winter months and cannot be accessed. Your guide will substitute this for another site on the day of your tour. This tour still runs in winter, though it will be canceled for fresh snow. Recommended year round; great walking shoes, layers, and water. 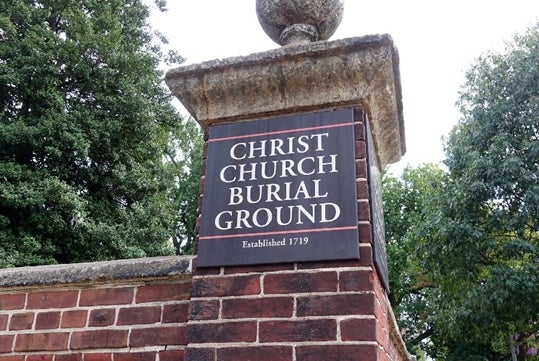 Private Family Walking Tour: In the Footsteps of the Founders Reviews

Have you been to Private Family Walking Tour: In the Footsteps of the Founders? Share your knowledge and be the first to review this.
Write a Review
Back to Top

Private Family Walking Tour: In the Footsteps of the Founders is located at Travel Curious • Outside the Wyndham Philadelphia Historic District hotel, 400 Arch St. • Philadelphia, PA 19106

Frequently Asked Questions about Private Family Walking Tour: In the Footsteps of the Founders

It is recommended to bring a refillable water bottle.

Where does the tour meet?

Can I bring my camera?

How long is this private walking tour?

What’s included in the tour?

This tour includes tickets to Independence Hall, entrance to Christ Church Burial Ground to see Benjamin Franklin's tomb (except Dec-Feb when closed), and a private two-hour guided walking tour with a professional guide.