This scenic boat tour departs from San Francisco’s historic fisherman’s wharf. Snap photos of the energetic waterfront, magnificent skyline and as you sail under the Golden Gate Bridge! The ship circles Alcatraz Island, cruises by the wildlife reserves of the Marin Headlands and many other fascinating sights. The history of the city is explained by award-winning narration the whole family will enjoy.

from Ashley, one of our San Francisco Travel Experts
Read More

Departing from the heart of historic Fisherman’s Wharf at Pier 43½, cruise alongside the San Francisco’s remarkable cityscape and view the lively neighborhood of North Beach, the famous swimming clubs of Aquatic Park, the historic vessels moored at Hyde Street Pier, the San Francisco Maritime National Park, and numerous other exciting sights along the way.

As you head west towards the Golden Gate Bridge, you’ll view Fort Mason and the Marina District, which was damaged in the 1989 Loma Prieta earthquake. Next, take in views of Crissy Field and the lush hillsides of the Presidio – both former Army installations – that are now part of the Golden Gate National Recreation Area. Don’t miss incredible photo opportunities while cruising directly under the massive 4,200-foot long, 746-foot high span of the Golden Gate Bridge.

As you head back into the Bay, travel past the wildlife reserves of the Marin Headlands and the legendary town of Sausalito, which was once home to the late-1960’s Flower Generation. With Angel Island State Park to your left, you’ll slowly cruise around (and up-close to) the infamous Alcatraz Island. On your way back to Fisherman’s Wharf, you’ll see the San Francisco-Oakland Bay Bridge and Coit Tower in the distance.

After a full hour of exciting sights on Red and White Fleet’s Golden Gate Bay Cruise, the barking sea lions over at nearby Pier 39 will welcome you back as you approach Pier 43½. Here, you can visit two National Historic Landmarks, the WWII submarine USS Pampanito and merchant marine vessel SS Jeremiah O’Brien.
Read More 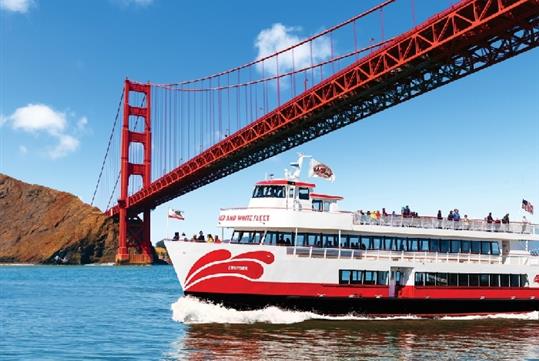 Have you been to Golden Gate Bay Cruise ? Share your knowledge and be the first to review this.
Write a Review
Back to Top

What should I wear?
San Francisco has many microclimates with frequent weather changes. It can be windy and cold on San Francisco Bay one moment, and hot and sunny the next. So we recommend that you dress in layers and bring a jacket to make sure you are comfortable throughout your tour. In case it rains, don’t worry as all of our boats have heated interiors with big viewing windows.

Where is it located?
Our San Francisco cruises depart from Pier 43½, located in the heart of Fisherman’s Wharf at the end of Taylor Street. You can find us on most GPS devices by entering “Red and White Fleet” as the destination.

Is the tour appropriate for children?
Yes.

When should I be at the departure location?
Please arrive at least 20-30 minutes before the scheduled departure time, as we otherwise can’t guarantee available space and are unable to hold the vessel.

Do your rates include tips and gratuities?
Yes. Red and White Fleet’s® rates for San Francisco Bay cruises include all taxes, gratuities, fees, and personal audio tour. Of course, you are certainly welcome to tip staff members for excellent service.

Can I bring my own food/beverages?
Coolers permitted? Yes. Red and White Fleet’s® vessels are equipped with cafes, offering hot & cold non-alcoholic and alcoholic beverages, snacks, and merchandise for sale. Bar purchases can be made with credit or debit cards. We are unable to accept cash at this time. You may also bring your own boxed luncheons.

What is your policy on smoking?
California Law prohibits smoking in vehicles, public buildings, bars, and restaurants. Smoking is not permitted on Red and White Fleet’s® tours or while waiting in the boarding line. We kindly request that all passengers comply.

Do you go to Alcatraz?
Red and White Fleet® does not land at Alcatraz. We do, however, offer cruises that travel very closely around Alcatraz Island. Do you offer ferry service to Sausalito, Tiburon, or Angel Island? No.
Back to Top