Titanic Museum announced both vaccinated and unvaccinated guests will be required to wear a face mask or covering when entering the Pigeon Forge Museum. Titanic Museum Attraction in Pigeon Forge, Tennessee features over 400 artifacts throughout 20 different galleries. You'll see the first-class suite, music gallery, bridge, try to shovel coal into the furnace, get into a lifeboat, and see the world's largest Titanic LEGO Ship built by a 10-year-old with autism. Only place in the world you can walk the actual Grand Staircase built from the Titanic blueprints. You'll enter as a guest and leave as a Titanic passenger. A phenomenal look into the personal experiences aboard the Titanic. The interactive exhibits help guests understand what transpired that fateful night. Don’t rush through the museum — every part of the self-guided tour is worth your time. Finding out the fate of your assigned passenger is an experience beyond words.

Facts about the Titanic Museum Attraction:
The Grand Staircase was built actual size from the blueprints. It cost over a million dollars to build the Grand Staircase. You'll be able to walk the Grand Staircase. Over 400 REAL Artifacts are on display. Guests can play the Titanic Baby Grand Piano. You can touch the 28-degree water. And touch a growing iceberg. KIDS enjoy the Titanic and the many interactive areas available to them. They are our Future Titanic Storytellers! They receive their own Boarding Pass of a real child passenger. You will enter as our guest and leave as a Titanic Passenger. 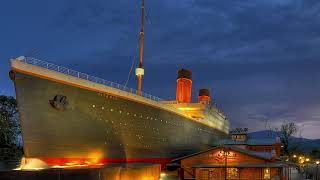 359 Reviews sorted by:
Write a Review

Christeen Root
Alto, MI
1 Review
Verified Traveler
"Such a great experience"
January 2022 NEW
It was so well done and such a great tribute to all those who built or were a part of the building of the Titanic as well as those who were it's only passengers. Well worth the visit.
Read More

Megan C.
Crawford, GA
4 Reviews
Verified Traveler
"COVID put a real damper on the museum"
January 2022 NEW
Wish we could have spent more time looking through everything and hearing the stories but people were steadily coming in and the devices telling the stories wasn't very loud to be able to hear well. But we loved what we were able to learn and see. The scavenger hunt for kids was great.
Read More
Tip: Definitely plan to go when times are slow so you can spend time looking at everything. Teressa Reavis
Graham, NC
2 Reviews
Verified Traveler
"Family Fun"
December 2021
My family of 10 went and we had an amazing time looking and learning. The game was a blast to see who lived and who died and to see who you were playing for the day and see the things about them throughout the tour
Read More
Tip: They have great gifts to buy at the end at good prices! Listen to instructions on working audio thing they give you.

Bonnie Gibson
Hendersonville, NC
4 Reviews
Verified Traveler
"Teen Girl trip"
November 2021
We had a great time at the Titanic. The girls were most touched by a crew member named Josh. He played the grand piano, told the story of the Jewish passengers onboard. They cried when they found out he was blind, they thought he played the piano beautifully.
Read More
Tip: There is an elevator for anyone who can't climb the Grand Staircase.

Angela C.
Greensburg , KY
2 Reviews
Verified Traveler
"Curious tourist & history lover!"
October 2021
Curious tourist! My son came home from school last year and was excited to of learned about the Titanic. I have done my research as well (I learned A LOT more) though. We were on Fall break we should check it out. The boarding passes give you insight on the people who were on board the ship. Also just to put your hand in the water that showed you how cold it was tonight that’s a Titanic sank. Makes it a lot different than what you read in books! I think it in a sense makes you travel back into the era or decade. I recommend it. It’s depressing but also a good lesson on how quickly life can change no matter “what class you belong too”!
Read More
Tip: It was a little bit depressing. At the end you see if your person on your boarding pass got to live or perished. Perished. Tonya R.
Morgantown, WV
1 Review
Verified Traveler
"Obviously not the real Titanic;however, FABULOUS!!!"
October 2021
A must see attraction!!! We shall do this tour again in the Spring!!! The Captain ?? at the end of tour, MADE THE EXPERIENCE EVEN BETTER!!!
Read More
Tip: Comfortable shoes!!! Is there a restaurant or cafe at the Titanic Museum Attraction?
No, there isn’t but there are many restaurants in the surrounding Parkway area.

How big is the Titanic Museum Attraction?
Titanic Pigeon Forge is a 30,000 square-foot, ship-shaped structure situated on 5.69 acres that overlook the Gateway to the Great Smoky Mountain National Park. The forward half of the ship is re-created and will be half-the-size of the original Titanic. It holds 20 galleries with hundred of artifacts on two decks. The primary objective in creating Titanic Pigeon Forge was to build a permanent monument to the 2,208 men, women and children who sailed on her.

I hear the museum attraction has re-created Titanic’s Grand Staircase and that visitors can actually climb the stairs. Is that true?
Yes. The section of the First Class staircase between A-Deck and B-Deck has been re-created using original plans from Harland and Wolff, the Titanic builders. It is centered under a wrought iron and glass dome that duplicates what was installed on Titanic. Additionally, there is an accurate re-creation of both a First Class suite and Third Class cabin.

Are there interactive opportunities for my kids to enjoy?
Yes, the interactive areas of Titanic Pigeon Forge provide many hands-on experiences that are designed to give children and adults alike a sense of what it might have been like to actually be on board the Titanic. Families will be able to learn how to send a wireless SOS signal and see how difficult communication was in 1912; they’ll feel what it was like to stand in the icy night air while touching a soaring wall of ice that simulates the iceberg that sliced through the ship. Guests will be able to experience water chilled to 28 degrees which delivers a stark reminder of what two-thirds of the Titanic’s passengers and crew had to endure.

How long does the tour take?
The Titanic Pigeon Forge Museum Attraction is a self-guided tour. Because there is so much to see and do in the museum the average length of time a guest will spend is two hours.

I’ve seen one of those Titanic traveling exhibits and wondered why I should care about seeing this one?
Titanic Pigeon Forge and Titanic Branson are unlike anything you’ve seen before. They’re permanent, Titanic-size museum attractions that are unequaled in the world. From the moment you board the ship, you’ll begin to see, experience, and feel the difference. Costumed crew members will introduce you to some of the 2,208 passengers and crew that were on board the ship and you’ll have an opportunity to pay your respect to all of them before you leave.