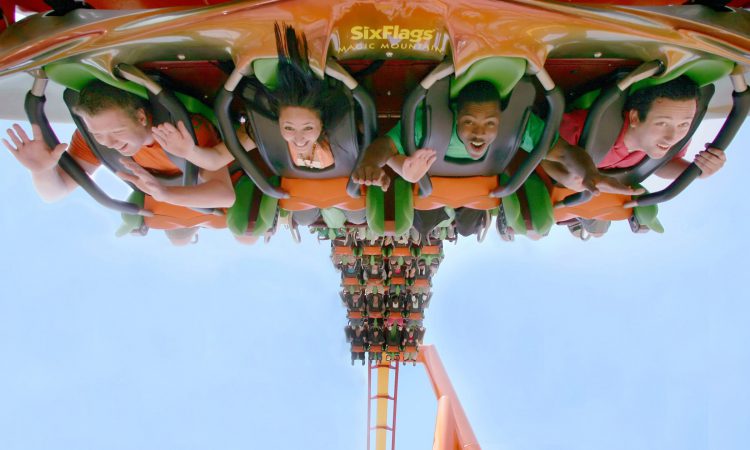 Plus, the ride has an interactive and immersive “pit stop.” This part of the ride was conceptualized and produced by the renowned West Coast Customs themselves! This pit stop gives riders an inside look at the West Coast Customs shop before the race speeds back up again. Of course, the roller coaster cars feature a sleek design only fitting of a West Coast Customs car.

Look out for final updates and the grand opening in 2020. West Coast Racers is expected to open in the fall along with the newly renovated Apocalypse wooden coaster.

The roller coaster is set to live in a brand new area of the park, too. This Los Angeles themed area will be where popular rides, Apocalypse and Cyclone 500 Go Karts are currently located. This section of the park is scheduled to be remodeled and will also include new dining, retail, and game locations for guests!

Six Flags is also expanding its Fright Fest and Holiday in the Park seasonal events. The new Underground area of the park will be transformed for each of park’s popular events. In addition, guests can expect the special event lineup to rise to a whole new level of thrills and entertainment.

Moreover, Fright Fest will unveil a new scare zone, more scare actors, live entertainment, and unique seasonal events to the Underground area in 2020. Holiday in the Park will present even more over-the-top seasonal lighting and themed entertainment. Currently, the new Underground area of the park is under construction, but guests can anticipate an urban street environment showcasing the upcoming West Coast Racers ride.

Six Flags Magic Mountain 2020 will be a record-breaking and thrill-seeking year for guests of the Los Angeles area amusement park. Are you pumped to ride the new West Coast Racers roller coaster? Let us know!

And don’t forget to read our Six Flags Magic Mountain tips before you go to the park. Trust us, they’ll come in handy!