For a truly unique vibe only the City of Angels can provide, check out Los Angeles’ Grand Park, a 12-acre urban oasis in the city’s Civic Center.

Located in downtown Los Angeles, Grand Park stretches from the Music Center on the west to City Hall on the east. The Park provides incredible views of the iconic city and surrounding areas. The Park is also considered part of the larger redevelopment plan known as the Grand Avenue Project.

The much anticipated Grand Park opened in 2012 to meet the needs of a central civic green space for one of the world's cultural meccas. Surrounded by L.A.’s City Hall, Music Center, numerous courthouses and administrative buildings, the Park has been widely celebrated with special events, including the 4th of July Block Party and the city’s largest New Year’s Eve gathering.

The Park thrives on the community’s diverse culture and interests. Grand Park, known as the “Park for Everyone,” commits to inclusion for all ethnicities. The community’s goal is to strengthen its relationship with the Black communities. In addition, the main sign at the Park’s entrance welcomes visitors in numerous languages. 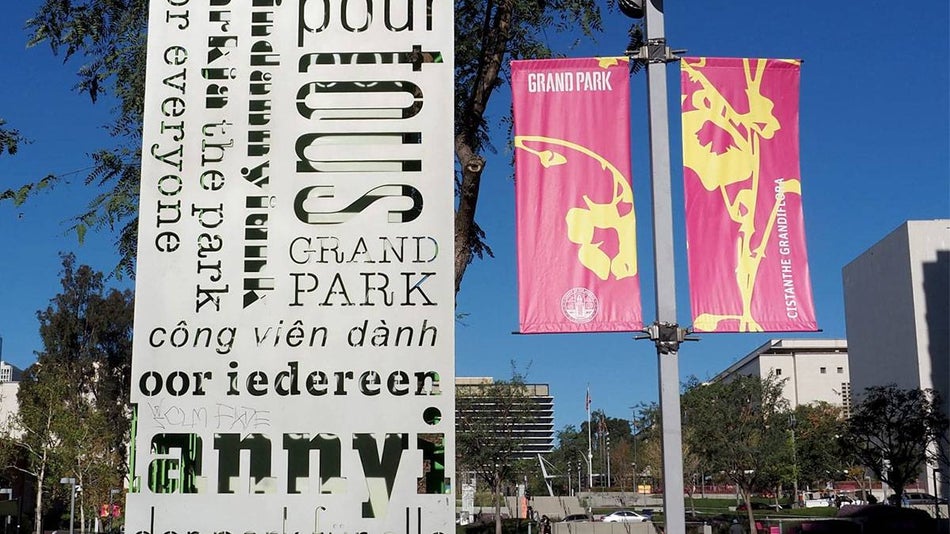 Since the Park’s opening, both kids and parents can play in the central fountain’s splash pad, bike ride, picnic, or hike through the Park's walking path gardens. The Park also features bright pink movable furniture throughout the grassy areas.

Dogs are not only welcomed at Grand Park but encouraged! Take your pet to the gated dog run on the lower terrace for ample experience and sunshine. Located between Spring Street and Broadway, the dog park has several benches and shady spots for visitors.

One of the Park’s biggest draws is the larger-than-life centerpiece fountain, named the Arthur J. Will Memorial Fountain, after chief administrative officer Arthur J. Will. The fountain memorializes Will’s dedicated service to the community for over 25 years. Restored to its greater glory in 2012, it cost $54 million to renovate.

The legendary memorial features a stunning evening light show with changing illuminations. By day, children can play in the shallow pond and splash pad with shooting sprinklers that stream water up to 60 feet in the air. 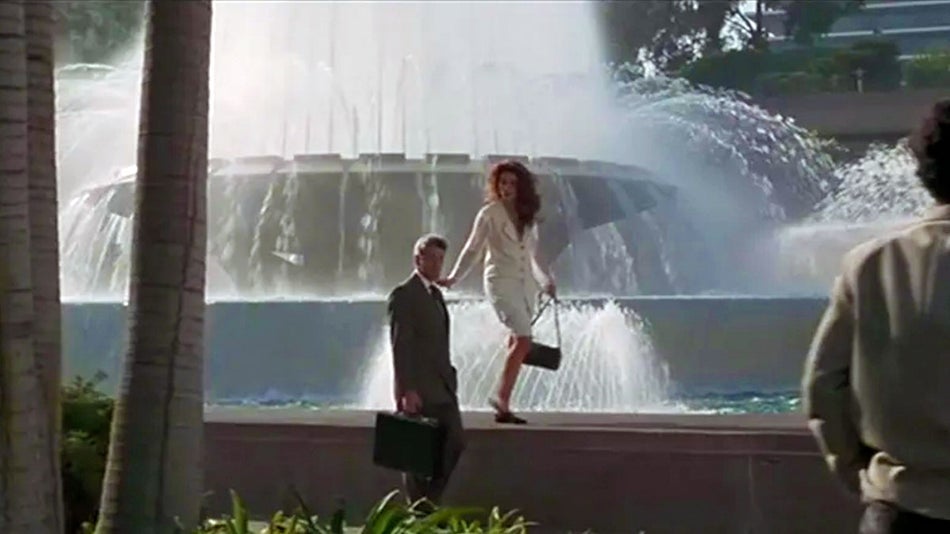 Kids can also explore the colorful playground on the Park’s lower terrace. The recreational area, designed for kids aged two to 12, includes a 12-foot slide, thrilling tunnels and mounds, and an entertaining treehouse tower.

In 1966, developers built the Civic Center Mall and incorporated quaint fountains and the prominent Court of Historic American Flags. Just east of Hill Street, the flags represent historic moments in American history, such as the Bennington flag from the Revolutionary War and a 1777 United States flag, the oldest in existence that depicts the first stars and stripes.

Other flags include the Taunton Flag, symbolic of the widening gulf between the U.S. and Great Britain, and a Besty Ross American flag. The Park also displays a memorial for the victims who died during the 1930 Ukrainian famine that killed over two million people and a  statue that pays tribute to the veterans who served in Vietnam. With a great view of the nearby City Hall stands a grand statue of Abraham Lincoln with a plaque displaying the Gettysburg Address.

Fun Fact: Looking to picnic in the Park but have an unusually large group of friends? No problem! Grand Park has a 75-foot long picnic table on the lower terrace, just off Broadway.

With a great view of the nearby City Hall stands a grand statue of Abraham Lincoln with a plaque displaying the Gettysburg Address.

Related Post: Where are the Hidden Gems in Los Angeles?

With tons of open green space, Park planners saw it fitting to design an upper Performance Lawn. At this gathering area, guests can attend one of the Park’s many outdoor events, including free movie nights and music concerts. The lower Event Lawn can host up to 15,000 people. The Park’s Performance Lawn and community terrace are comprised of drought-tolerant plants.

Pro Tip: Stop by the on-site Starbucks to refuel and grab a delicious snack.

Located at the end of the Grand Park Promenade on Spring Street, City Hall has a free observation deck with incredible vistas of Grand Park and L.A. The Art Deco City Hall building, constructed in 1928, is worth visiting all by itself! Stop by this amazing building and check out the spectacular sights from the 27th-floor deck.

In addition to the series of levels and stairs, the Park provides accessible ADA-approved ramps, sloped walkways, and a new elevator that leads to a vibrant garden.

Related Post: New Year’s Eve in Los Angeles: Things to Do and Where to Celebrate

The Park’s operating hours are from 5:30 a.m. to 10:00 p.m., and parking for Grand Park is available in Lot 10 (weekends only) on N. Broadway between First Street and Temple Street. The Lot 10 rate is $3.50 per 15 minutes or $20 per day and $10 per day for the weekends, evenings, and special events. Visitors can sometimes find free street parking on the weekends and a Red Line Metro stop.

Related Post: Unforgettable Romantic Things to Do in Los Angeles for Couples

In addition to the Park’s Starbucks, check the Grand Park website for the weekly list of food trucks.

For a truly unique vibe only the City of Angels can provide, check out Los Angeles’ Grand…