With over 24 million visitors annually, it’s easy to see why San Francisco's iconic Golden Gate Park is one of the country’s most incredible coastal destinations. The park features more than 1,000 acres of lakes, trails, and vibrant gardens to explore.

If you happen to visit the city by the bay, make sure to check out this renowned historic “Park for the People.” Golden Gate Park is the third most visited city park in the United States after NYC’s Central Park and the Lincoln Memorial.

In addition to the park’s gorgeous, rustic lakes and green grasslands, Golden Gate Park supports 19 distinct ecosystems and has more than 2,000 plant and animal species.

Fun Fact: A 25-year-old civil engineer, William Hammond Hall, designed the famous park, achieving what many believed to be an impossible feat for such a barren location.

The San Francisco Recreation & Parks Department began overseeing the development of the Golden Gate Park in 1871.

The park was initially carved out of barren sand dunes, and many doubted the park’s inception. This manufactured ‘artificial park’ was built with the help of fertilizer and water (street cleaners dumped the city’s horse manure, and builders filtered in the water for planting).

From west to east, the park is more than three miles long and about half a mile north to south.

Fun Fact: Did you know that Golden Gate Park was the birthplace of the Summer of Love movement when over 30,000 people gathered to celebrate the wave of writer Gary Synder’s call for collective expansion of consciousness.

Related Post: Wine Tours in Napa Valley & Sonoma: Where to Go & Why

Through the years the enigmatic Golden Gate Park has played host to the California Midwinter International Exposition of 1894.

Millions of visitors flock to the city’s largest park each year, and in 2020 the park celebrated its 150th anniversary. It would take guests of the park days to discover the numerous paths, botanical gardens, and museums.

Easily the park’s top-rated attraction, this 25-foot Philippine Coral Reef Tank is filled with 212,000 gallons of water and represents one of the largest displays of a living coral reef in the world. 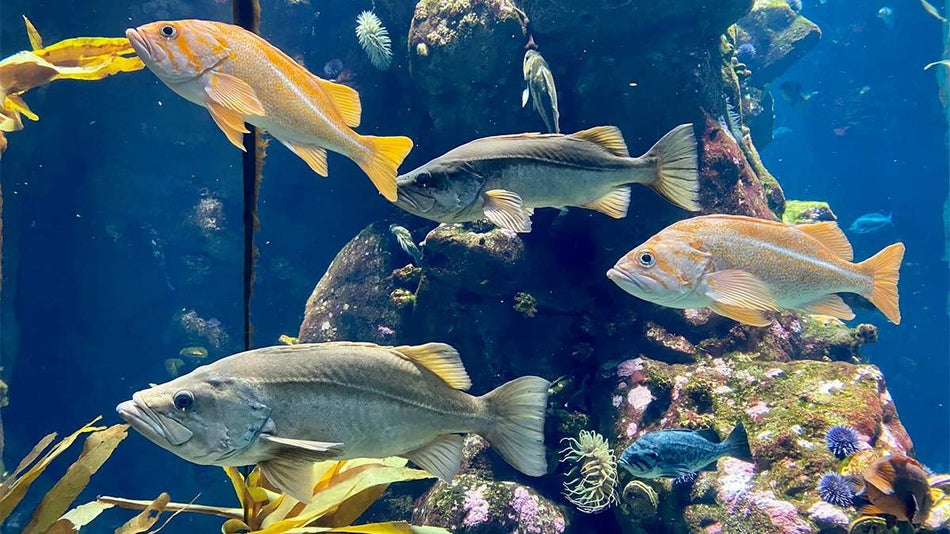 Synonymous with the Summer of Love movement, this cultural sloping hill helped create the flower children of the 1960s. The hill is close to the infamous Haight-Asbury neighborhood.

Photo Alert: Snapchat a picture of you and your friends at this Hippie Hill location draped in beads, flowers, and John Lennon sunglasses.

De Young purchased many of the art paintings and sculptures and grew his collection to over one million items. The west wing of the museum features the artistic history of San Francisco. Though the park doesn’t charge admission, certain attractions such as the DeYoung Museum do.

The two-story chalet located at the western end of the park faces the Great Highway and Ocean Beach. It holds numerous restaurants and murals from the 1930s.

This 60-feet tall Celtic-style cross commemorates Sir Francis Drake’s arrival on the West Coast in 1579. The cross was meant to be visible to ships at sea but has since been overgrown with trees. 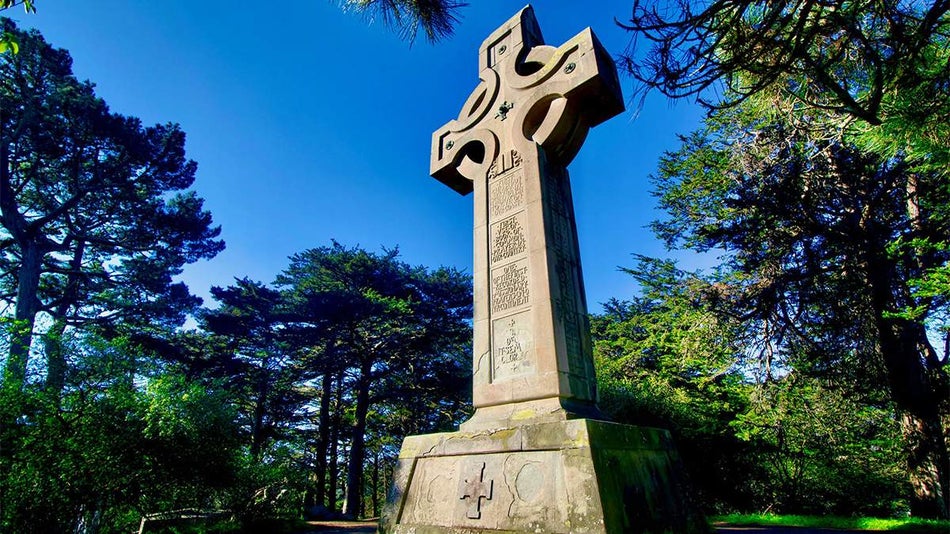 Built in 1914 and located near the Koret Playground, this ride displays 62 animals, a German Band Organ, and painted landscapes of the bay area.

The California Academy of Sciences

Founded in 1853, this institute is the oldest scientific academy in the western United States. The building withstood severe damage during the 1989 earthquake and includes natural history and rainforest exhibits.

The Music Concourse plaza, also called the “Bandshell,” is home to numerous musical performances throughout the year. During the fall, spring, and summer months, food trucks provide lunch and dinner options for the musicians and fans.

Built in 1891 to honor the Wild West,  this area supported a herd of American bison and recently received five baby bison calves.

Related Post: 13 of the Most Entertaining Things to Do in San Francisco with Teenagers

Fun Fact: Bison are not the only incredible beasts to call Golden Gate Park their home. Moose, caribou, zebras, and antelope have roamed the park plains, and over 100 coyotes live in the bay area.

Golden Gate State Park claims to have the oldest public Japanese Tea Garden in the United States, as well as two Dutch windmills that add a touch of Swiss charm. The windmills, situated at the furthest western, pumped water throughout the park. 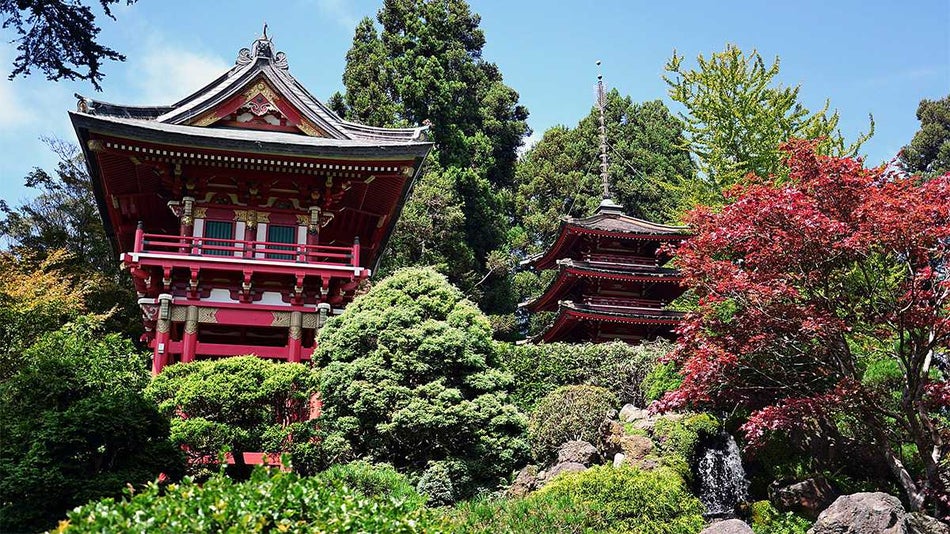 Early engineers planted over 700 trees to stabilize the dunes. The types of trees ranged from Eucalyptus, Monterey pine, and Monterey cypress. They also created an open walking space along the Pacific shoreline on the park's western side.

Designer George Turner Marsh initially created the garden as a Japanese Village. The garden soon transitioned from an exhibit to a permanent installation and features dwarf trees, bamboo, and azaleas.

Related Post: 21 Fun Things to Do with Kids in San Francisco

The garden itself brings more than one million visitors annually to the city and park. The garden also has its own souvenir shop and food court.

Fun Fact:  In 1953, in an attempt to make amends after World War II, the Japanese government gifted the park a bronzed Lantern of Peace, which weighed in at over 9,000 pounds.

This conservatory is one of Golden Gate’s oldest buildings.  In addition, it is one of the biggest in the country. The conservatory hosts 1,700 species of tropical, rare aquatic plants and has one of the largest Victorian greenhouses in the U.S.

This 55 acres arboretum contains more than 7,500 plant species and the Helen Crocker Russell Library, with books specific to horticultural.

Golden Gate Park showcases ten premier lakes and two waterfalls. Both are man-made and can be turned off for cleaning.

This dedicated space of healing and hope pays tribute to the millions of Americans affected by AIDS.

Filled with flowers and plants found in the words of William Shakespeare’s memorable plays, these gardens have over 200 varieties of poppies, daisies, roses, violets, and lilies that jump from the bard’s pages and spring into life before your very eyes.

Related Post: How to Plan Your Perfect San Francisco Honeymoon

This gift from Queen Wilhelmina of the Netherlands is one of the most beautiful bright spots in the park.

Photo Alert: If tulips are your fave, you must plan a trip in early spring to behold the extravaganza of blooming color and snap the best postcard-worthy pics.

Related Post: When is the Best Time to Visit San Francisco?

Rentals can be obtained behind the bandshell and at Haight and Stanyan on the east side of the Golden Gate Park.

The popular Japanese Izakaya Sorai is just a block away from the Golden Gate Park and services small tapas plates.

Related Post: Where are the Best Cheap Eats in San Francisco?

Visitors can park in the Millberry Union garage, the Kezar Stadium parking lot, the Ocean Beach Parking lot, or underneath the de Young Museum. One of the underground parking garages has spots for 800 cars. Many of the nearby public streets provide parking options as well.

With over 24 million visitors annually, it’s easy to see why San Francisco's iconic…