The spot overlooks incredible views of Oahu's legendary beaches and the daring escapades of world-class surfers below. The nearby Kuilei Cliffs Beach Park, best known for surfing, snorkeling, and fishing, is an 11-acres area backed by sea cliffs. Some say the sand glitters in the sun.

The American aviator Amelia Earhart championed women’s advancement in aviator by breaking and setting numerous flying records. Earhart took her first plane ride at age 23 and soon became the 16th woman to get her pilot’s license. On June 17, 1928, she flew from Canada to Wales with a few male pilots. Not long after, Earhart flew solo nonstop across the Atlantic Ocean. At the time, Charles Lindbergh was the only pilot who had flown across the mid-Atlantic Sea. The flight lasted 14 hours and 56 minutes.

Next, Earhart flew solo halfway across the Pacific, breaking another record. Earhart became the first pilot to fly alone from Honolulu, Hawaii, to Oakland, California.

Unfortunately, in 1937, Earhart attempted to fly around the globe but only completed a distance of 22,000 miles. She had just 7,000 to go. Earhart lost communication over the Pacific in 1937 when her plane disappeared. Officials declared the famous aviator and her co-pilot legally dead in 1939, creating one of the greatest unsolved mysteries of the twentieth century.

Fun Fact: When Earhart was just 16, she built a wooden roller coaster with her uncle’s help. Her invention sparked her love for flying.

In 1935, the cliff gained global notoriety as the departure spot of famed female pilot Amelia Earhart's historic solo flight from Hawaii to California. Amelia Earhart Lookout is the highest point on Diamon Head Crater, near Diamond Head State Monument. Diamond Head is estimated to be about 400,000 to 500,000 years old.

Related Post: Oahu on a Budget: How to Save BIG With a Go City Pass

Earhart's groundbreaking historic flight across the Pacific took 18 hours and gained the pilot international acclaim. Some called it a publicity stunt for Earhart and Hawaiian sugar plantation promoters since the dangerous 2,408-mile flight had already claimed several lives. Earhart departed from Wheeler Field in Honolulu and landed in Oakland, California. 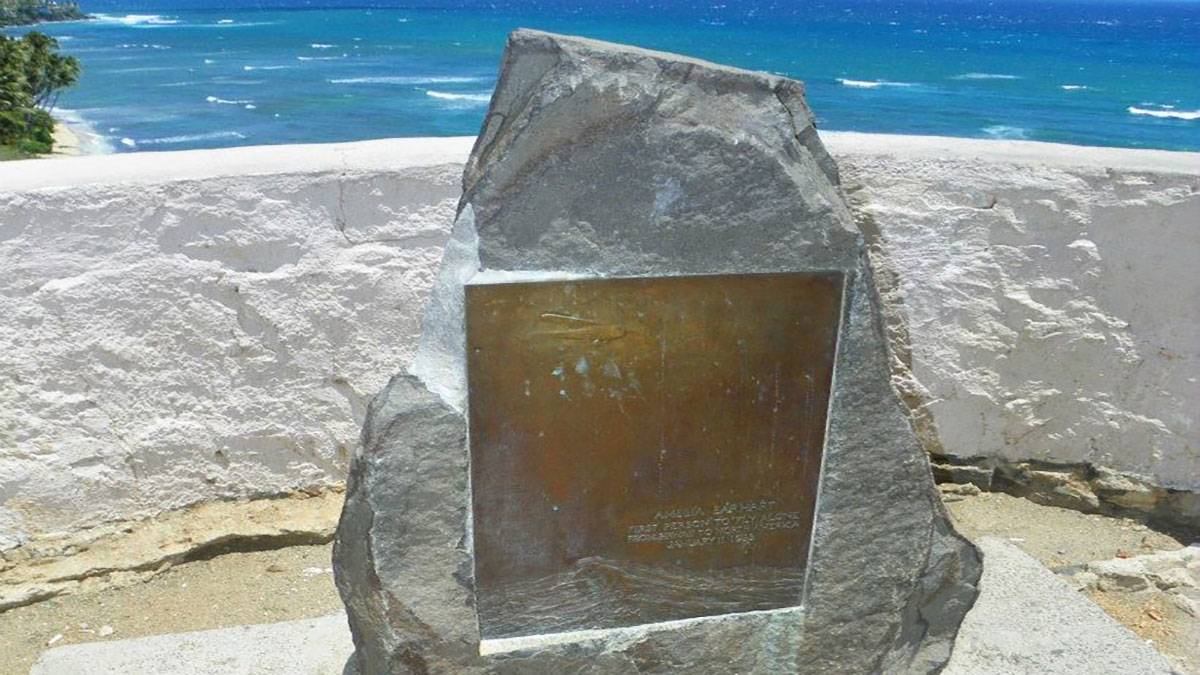 The Amelia Earhart Marker is a bronze statue that pays tribute to Earhart. The plaque reads, "Amelia Earhart, the first person to fly alone from Hawaii to North America, January 11, 1935."

The area holds eight more historical markers within two miles of the Earhart Marker. Others include the Diamond Head Lighthouse, the Millennium Peace Garden, and the Stones of Life, which represents the spiritual history of the Waikiki people.

The Diamond Head State Monument, a three-minute drive from Earhart's Lookout, is Hawaii's most recognized landmark. The 475-acre park (including the interior and outer slopes) is known for its hiking trails, military history, and panoramic coastal views.