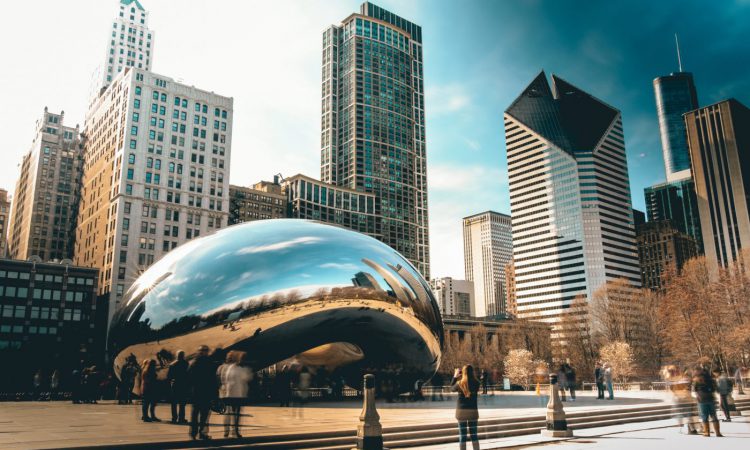 When the temperatures drop and the wind picks up, that’s when the fun in Chicago heats up! Grab your winter jacket and check out these 13 things to do in Chicago during December.

With glowing city lights and an abundance of holiday decor, Chicago becomes a winter wonderland each December. To celebrate the holidays, the city hosts a multitude of events and activities including:

Pick up a cup of coffee or hot cocoa and experience the magic of the holidays in Chicago.

2. Go to a Chicago Blackhawks Game

Although I’m a diehard Nashville Predators fan, you can’t visit Chicago in December and not go to a hockey game. Between the competitive fans (and players) and the atmosphere of the arena, attending an NHL game is one of the most exciting things to do in Chicago during December. If you’re a fan of another team, see if they have an away game in Chicago during your trip.

If you’re not a fan of hockey, the iconic Chicago Bulls NBA team also has several home games in December.

3. Finish Your Holiday Shopping along the Magnificent Mile

The Magnificent Mile on Michigan Avenue is lined with top brands and stores—perfect for finishing that holiday shopping you’ve been putting off until the last minute. Plus, in December, the stores boast wonderful window decorations and holiday lights making for a whimsical winter ambiance throughout the street. A visit to this Chicago staple during the holidays is a must.

Think of every Christmas movie you’ve ever seen. How many of them have a scene where the characters go ice skating on a gigantic outdoor rink illuminated by city lights? Quite a few, right? Transport yourself into a Christmas movie by ice skating at Millennium Park in the center of Chicago!

Since you likely won’t be bringing ice skates with you on a vacation, you can rent ice skates at the park for $13-15. Of the affordable things to do in Chicago during December, ice skating at Millennium Park is one of the most exciting!

Are you visiting Chicago with kids? If so, go for a ride on the Polar Express!

Each winter, the Amtrak train at Chicago’s Union Station transforms into a marvelous holiday experience for families. When you buy a ticket to ride the Polar Express, you receive festive entertainment, delectable hot chocolate, Christmas cookies, and your own sleigh bell similar to the one in the classic children’s book. Plus, kids and adults alike are encouraged to wear their pajamas on the train ride!

The Polar Express is a sure-fire way to make lifelong holiday memories with your family.

This year, visitors can enjoy numerous activities, including but not limited to:

With plenty of activities for children and adults alike, it’s easy to see why Winter Wonderfest made our list of the best things to do in Chicago during December. Note that the event takes place December 6th through January 12th, and tickets are available November 6th.

To celebrate the anniversary of the repeal of the prohibition, the Chicago History Museum hosts The Last Speakeasy in December. At this exclusive, adults-only event, guests can enjoy dancing, games, and various types of liquid luck throughout the night while also touring the museum exhibits. Be sure to come dressed to impress! You might just win the 1920s costume contest.

Starting at the end of November, the Lincoln Park Conservatory becomes blanketed in a sea of Christmas decor for the annual Holiday Flower Show. From poinsettias to towering trees decorated with twinkling lights, the conservatory is an awe-inspiring holiday destination. This year, the show will feature photographs from the 1940s and 1960s to celebrate past holiday memories. Plus, the winter-long event is free to attend! Who said the best things to do in Chicago during December had to be expensive?

Make your December trip to Chicago absolutely brick-tastic with a trip to the LEGOLAND Discovery Center. This winter, the attraction comes alive with festive fun for their Holiday Bricktacular event. Families can snap photos with Santa Claus, embark on an awesome themed scavenger hunt, and put their building skills to the test for holiday challenges. Guests can build a gingerbread house, Christmas ornaments, and more!

10. Get Tickets to a Christmas Show

While New York City and Los Angeles are known for world-class performances, some of the best Christmas shows around are right in Chicago! Plus, what December trip to the Windy City is complete without tickets to a festive show? Get your tickets to top holiday productions, including:

Of the best things to do in Chicago during December, strolling around the city is my absolute favorite. This free activity puts you in the holiday spirit, gives you a glimpse into life in ChiTown, and maximizes your time in the city. While exploring Chicago, make sure you see these top landmarks:

If you plan to visit Chicago at the end of December, why not stay and celebrate New Year’s Eve? The biggest and brightest fireworks display in Chicago happens each year at Navy Pier. For the best seats, reserve a spot on one of the many New Year’s Eve dinner cruises. You’ll enjoy an unobstructed view of the fireworks show while sipping on champagne and dining on Chicago’s finest cuisine.

No matter when you visit Chicago this winter, seeing the city’s skyline must be on your itinerary. Purchase your tickets for 360 Chicago and Skydeck Chicago for unparalleled views of the city. Plus, if you time your trip just right, you may be able to see the skyline covered in snow!

Enjoy The Greatest Things to Do in Chicago During December

Chicago in December is a special time of year. Between the lights, the festivities, and the fun, there is something for everyone in Chicago during the holidays.

What are your favorite things to do in Chicago during December?