Are you ready to live your own adventure in a galaxy far, far away?

So, raise a glass of Blue Milk and set your coordinates for planet Batuu. Then, prepare to live your very own Star Wars story at Walt Disney World Resort!

When you visit Star Wars: Galaxy's Edge, you’re entering planet Batuu. This remote planet is a brand-new world, one that’s never been explored on film before. As a result, Walt Disney World Resort can explore all the best parts of the Star Wars films. In addition, this Batuu can create its own unique place in Star Wars history.

As a remote outpost and thriving port, Batuu is an infamous stop for traders, adventurers, and smugglers traveling around the Outer Rim and Wild Space. Its design is one that encourages exploration; signs are limited so one truly feels like you’re on a discovery mission. Of course, there is no Star Wars without the war so visitors will see the presence of the First Order as the Resistance who is fighting to oppose them.

There are two main attractions at Star Wars: Galaxy's Edge but they’re massive, fan-serving rides that do not disappoint.

Climb aboard the Millennium Falcon, designed as an interactive motion simulator ride, for a daring flight on the fastest ship in the galaxy. Guests are grouped together in crews of six, and whether you’re designated as the pilot, engineer, or gunner, your role is crucial to the mission’s success. As the engines roar to life, you’ll blast off into the galaxy. Then, jump into hyperspace towards a danger-filled adventure. Watch out, though! The First Order is hot on your heels and trying to wreak havoc on your mission at every turn.

Star Wars: Rise of the Resistance

Join the Resistance in an epic battle against the First Order and Kylo Ren on this impressive new ride. Part walk-through, part trackless dark ride, there’s a mix of multimedia elements used, such as projections, audio, animatronics, and physical effects, that places you right in the middle of the action. Along the way, favorite Star Wars characters—including Rey, Finn, Poe Dameron and BB-8—will join the action to help you!

Please note Star Wars: Rise of the Resistance will not open until December 5, 2019. 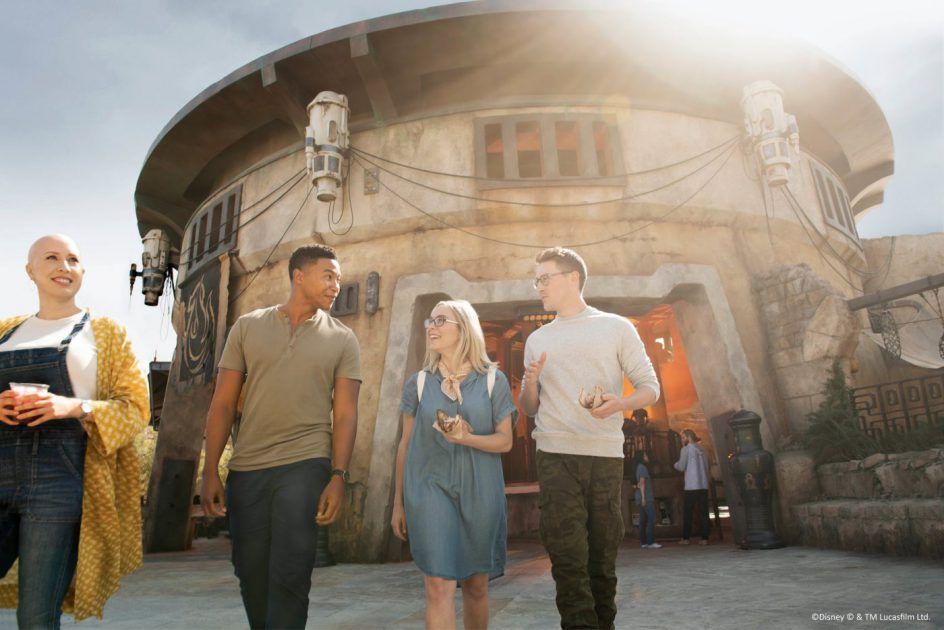 Oga’s Cantina – If you’ve always wanted to step inside one of the Star Wars galaxy’s infamous cantina’s, a visit here is a must. This local watering hole is where bounty hunters, smugglers, rogue traders and weary travelers coming to refuel, conduct meetings and enjoy the musical entertainment of droid DJ R-3X. Alcoholic drinks, mocktails, and other specialty items, like Blue Milk, are served here.

Docking Bay 7 Food and Cargo – As the main dining option, Docking Bay 7 is where the majority of Star Wars: Galaxy's Edge visitors will eat. Food options are healthier here than they are at other sections of the park. And, maybe a bit more far-out too. Meal options include sticky pork ribs with a blueberry muffin and cabbage slaw; yobshrimp noodle salad with chilled shrimp, marinated noodles, vegetables, and cilantro; and braised shaak roast with pot roast, cavatelli pasta, kale, and mushrooms.

Ronto Roasters – Inside a hanging podracer, visitors will find a droid serving as pitmaster at this market dining stall. Featuring a mix of exotic meats, this food stall serves a delicious Ronto Wrap filled with grilled pork sausage, peppercorn sauce, and tangy slaw, all wrapped in a pita.

Milk Stand – Stop by the milk stand for a cold drink of blue or green milk, that’s both refreshing and delicious. 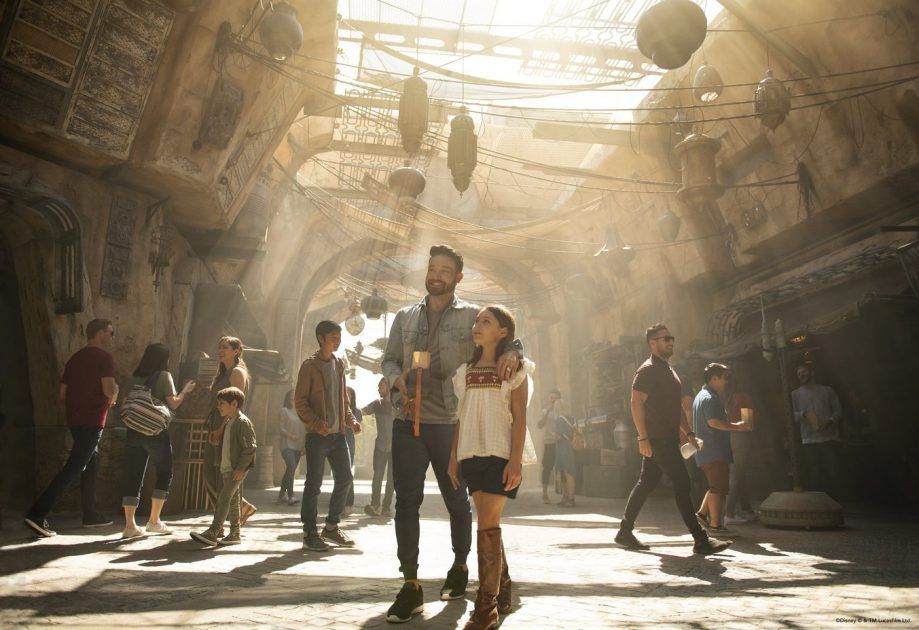 Any Walt Disney World Resort themed area needs a section dedicated to shopping. With that in mind, Disney Imagineers went above and beyond in creating Black Spire Outpost’s marketplace. This collection of shops and merchant stalls takes its inspiration from those in Marrakesh, Morocco. In addition, they feature custom merchandise and unique experiences that can only be found at Star Wars: Galaxy’s Edge.

Savi’s Workshop: Handbuilt Lightsabers – Construct one-of-a-kind lightsabers* with the help of “Gathers,” a skilled group who will bring it to life through the power of kyber crystals. (*Purchase required. Reservations may be required.)

Black Spire Outfitters – Need some new duds for your galactic adventure? Stop here for an eclectic selection of stylish yet functional clothing.

Droid Depot – Build your own droid* at Black Spire Outpost’s industrial depot. It is stocked with parts, chips, manuals and other tech items useful for constructing your very own droid, one of the galaxy’s most indispensable sidekicks. (Purchase required. Reservations may be required.)

First Order Cargo – Proclaim your allegiance to the mighty First Order and shop for recruitment gear and supplies.

Resistance Supply – Rendezvous with other Resistance allies in a forested area near the ancient ruins. There, members of the Resistance have set up a secret makeshift post where you can join the cause to defeat the First Order.

The Jewels of Bith – This street stall is teeming with trinkets, treasures, and other must-have accessories.

Toydarian Toymaker – Here in this humble, jumbled shop you’ll find all manner of artisanal playthings and collectibles. Handmade by Zabaka the Toydarian, her fantastical storefront is cluttered with crates of toymaking supplies and other unique works in progress. 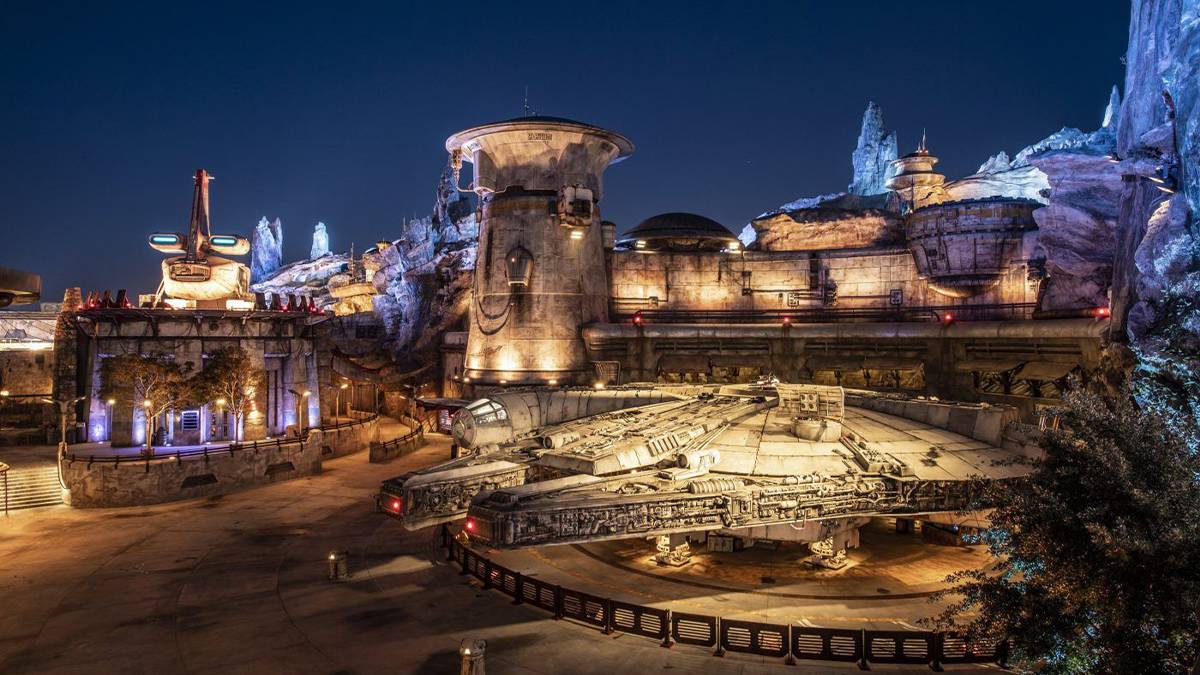 If you’re planning on visiting this new land at Walt Disney World Resort, follow our tips to make the most of your time there.

For guests of Disney Resort Hotels, be sure to take advantage of Extra, Extra Magic Hours to enhance your time at Star Wars: Galaxy’s Edge. From September 1 – November 2, Extra, Extra Magic Hours will be offered every morning at Disney’s Hollywood Studios from 6 am – 9 am. Do keep in mind, capacity is limited and will be available on a first-come, first-served basis.

It’s always a good idea to reserve a hotel close to Disney World. (It’s an even better idea to book a Disney Resort Hotel considering the perks!) However, this is especially true when the park is opening a new land or attraction as crowds can peak and traffic can be atrocious. When you opt for a hotel close to the park, your access to Walt Disney World Resort will be streamlined.

The time has come for you to live your own adventure at Star Wars: Galaxy’s Edge. When will you visit? Let us know all about your trip in the comments!