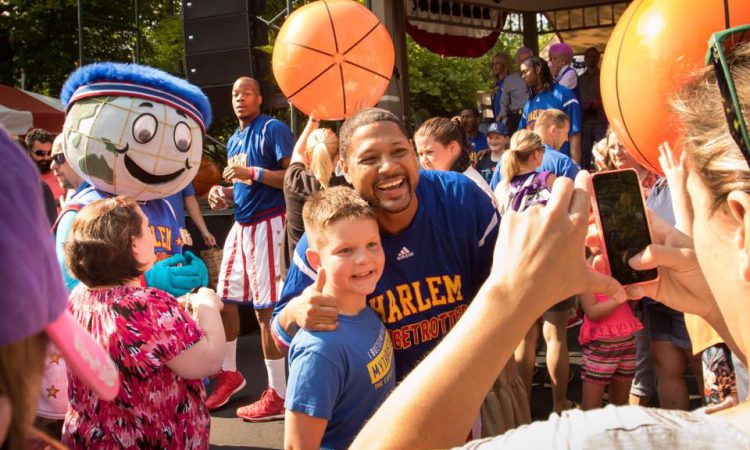 For the first time ever, the Harlem Globetrotters are performing in Branson, MO. Visitors will have the chance to watch these basketball superstars perform this summer at Silver Dollar City during a six-week run. It’s all part of a Star-Spangled Summer at Branson’s premier theme park.

The legendary team has been entertaining families for almost 90 years. Before, families might get one chance to see them perform at a nearby arena. Now, though, with a permanent showcase at Silver Dollar City it’s easy to watch these talented athletes perform. Their skills are put on display during a 30-minute set, during which high-flying dunks, ball handling, aerial jumps and classic Globetrotter comedy are featured.

This is the first time the Harlem Globetrotters have performed a production show, and the first time they’ll headline the same venue for this length of time. Utilizing a four-story video screen, effects and a specially-designed half basketball court, The Globetrotters Experience is a unique addition to the family-friendly summer festival at Silver Dollar City. Catch the show now through July 19, 2015.

During a Star-Spangled Summer, Silver Dollar City Branson has extended hours, educational entertainment, cartoon character meet and greets with SpongeBob Squarepants, Scooby-Doo, Dora and others, as well as live music.

Purchase Silver Dollar City tickets to be a part of the summer fun! Branson vacation packages are available too, so you can add tickets to White Water, Dixie Stampede, Jonah and more to your itinerary.