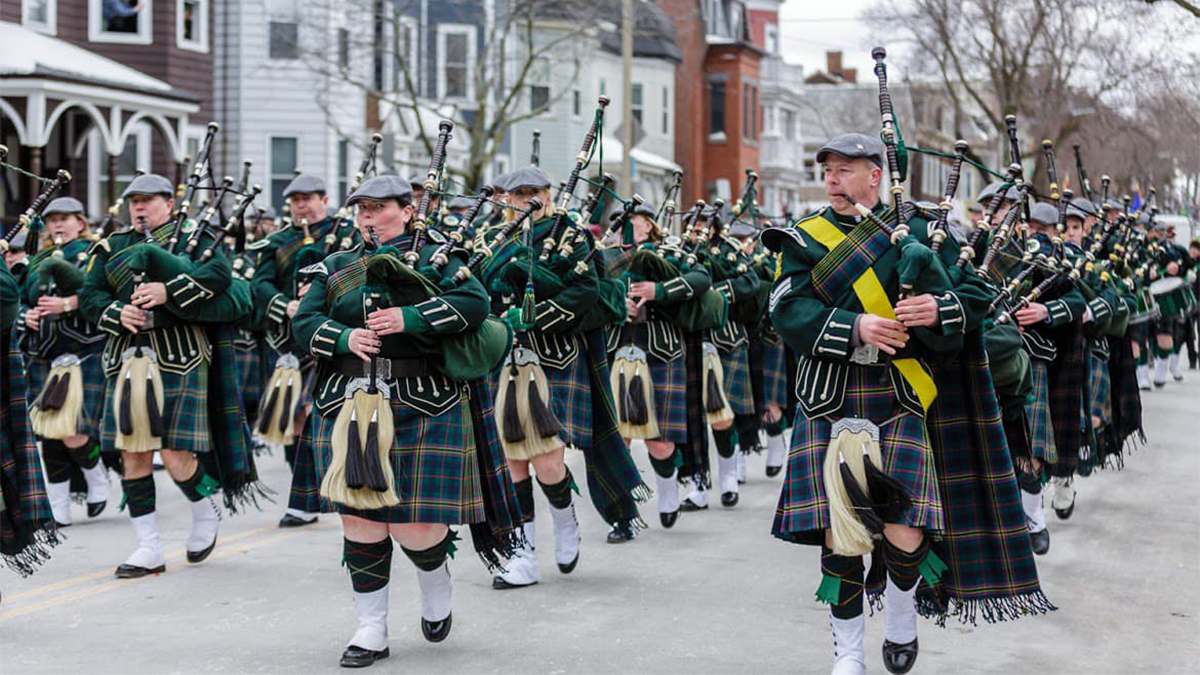 What to Do in Boston for St. Patrick's Day

For almost 300 years, the St. Patrick's Day Parade (also known as the Evacuation Day Parade) has delighted the sprightly shamrocks and lucky leprechauns of Beantown. Presented by the South Boston Allied War Veterans Council, this massive fette of floats, costumes, bagpipes, and more is a spectacular homage to the city's Irish.

Get ready for loads of beer and merriment as the festivities kick off at 1 pm on March 20th, 2022.

The parade lasts for approximately 2 miles and begins at the Broadway' T' Station and ends at Farragut Road, South Boston.

Pro Tip: Optimal viewing for the parade can be found anywhere along Broadway.

Trade your beer for some walking shoes as you step back in time to honor the history and heritage of Boston's Irish. The Irish Heritage Trail is a self-guided three-mile walking tour that illustrates the contributions of the city's Eire immigrants.

The route begins at the stunning Rose Kennedy Rose Garden in the North End, traverses Downtown Boston and Back Bay, and concludes at Fenway Park.

Photo Alert: Witness amazing public art, statues, and memorials such as the monument to Irish politician James Michael Curley and the Boston Irish Famine Memorial, and the Massachusetts State House.

Calling all film buffs! Cozy up with some popcorn, and leave the rabble-rousing to the beer-soaked crowds when you enjoy a quiet evening at the Irish Film Festival.

A testament to Irish filmmakers' artistic prowess and creativity, this yearly festival screens anywhere from 30-40 films, all of which explore themes endemic to the Isle.

Toast to a long life and a merry one when you spend the day celebrating your Irish pride in a Boston Pub.

Participate in the most Irish of pastimes when you hole up for a week's worth of St. Patrick's Day-themed fun at the Lansdowne Pub. Heralded as Fenway Park's favorite Irish pub, an afternoon here means plenty of cold pints, live music, and more.

Need some stick to your ribs fare to mop up all that Guinness and Jameson? Head on over to the famed Mr. Dooley's Boston Tavern for a proper boiled Irish dinner or a hearty helping of Shepherd's pie and beef stew.

The merriment begins on March 16th, 2022, and you can expect a whole week of bagpipes and lilting Celtic-style tunes.

A Boston institution, the Black Rose has been pouring pints and slinging corned beef for over 40 years. Prime yourself for plenty of Craic and authentic Gaelic ballads, as they regularly feature live Irish performers**.

Settle in for a full Irish breakfast, complete with black and white pudding, and let the imbibing begin!

**Reservations and tickets will be required for St. Patrick's Day this year.

Beer, bagpipes, and plenty of brewery eats make the Harpoon St. Patricks Festival a must-stop for any March Boston visit.

Enjoy ceremonial keg tapping, dueling pianos, DJs, and more as you sip on the finest Harpoon ales and brews.

Is it even St. Patrick's Day in Boston if you aren't blasting the Dropkick Murphys? Ship off for an evening of Craic at the Dropkick concert, which has now been extended with extra dates for March 17th, 18th, and 19th, at House of Blues, as well as added performances at Roadrunner in Brighton.

Where to Stay in Boston for St. Patrick's Day

Not lucky enough to be a resident of the City on a Hill? If you are solely stopping by Boston to party it up in honor of the Emerald Isle, here are our top picks for St. Patrick's Day accommodations:

Modern, sophisticated, and sporting a 1908 Gothic Revival façade, the Godfrey Hotel is a popular choice for travelers seeking lodgings in the trendy Downtown Crossing. Conveniently located close to Boston Common and the Park Street Station, a stay here puts you within spitting distance of public transit and a wealth of restaurants, bars, and premier shopping.

A four-star Kimpton property located just one block from the Park Station metro, the Nine Zero hotel boasts searing views of the Boston Common, Beacon Hill, and the golden dome of the Massachusetts State House.

Sneak in some fitness in between rounds of whiskey when you take advantage of their 24-hour gym and courtesy hotel bikes which can be used all over the city.

Lavish boutique accommodations in South Boston? Yes, please! Stay in Boston's most Irish neighborhood, and get first dibs on parade viewing when you make reservations at the Cambria Hotel. Spacious, elegantly appointed rooms boast the latest modern amenities and ensure you'll achieve plenty of shut-eye in between bar hopping.

Every March 17th, the City on a Hill explodes with Irish pride and pomp as people take to the streets to commemorate this festive day. Irish immigrants are largely credited with bringing this historic holiday to America, and Boston's resident Eire population has been turning out for the infamous St. Patrick's Day Parade since 1737.

From authentic Irish pubs to film festivals to scenic walks along the heritage trail, there are so many ways to let the luck of the Irish rub off on you this St. Patrick's Day.

Whether you are chugging green beer, marveling at the Boston Massacre Memorial, or getting your jig on at a Dropkick Murphys concert, there's no better place to lean into the luck, spirit, and laughter of the Emerald Isle than Boston.