Charlotte’s Billy Graham Library Goes All Out For Christmas 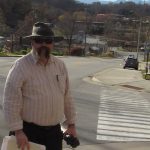 When C.S. Lewis wanted to contrast joy and sadness, he used the phrase "... always winter, but never Christmas."

The Christmas Season has come to symbolize the epitome of joy and celebration. Every year we seek places to experience this, and last week I found one. The Billy Graham Library’s Christmas celebrations certainly check all the boxes for the Christmas Spirit.

My parents and I had been to the Billy Graham Library in Charlotte several years ago, but it wasn't during Christmas.

At Christmas, they go all in, with carriage rides, caroling, and lots of lights. This year we finally visited the Library at Christmas, and it was so wonderful. I have to tell, well ... everybody.

The toughest part of getting to the Billy Graham Library was the traffic. Traffic in Charlotte was, well, traffic in Charlotte. But everybody behaved, and we got to Exit 33 off I-85 safely. Mom used the GPS on her phone to get there, but it's not hard to find since the Library is a major attraction in Charlotte. (Dr. Graham may be Charlotte's most well-known son, so the city has gone out of its way to make his Library welcome.)

It was already dark when we arrived, but the Library entrance was easy to find because of all the Christmas lights. (They have lots of lights --- but I'll get to that later.)

We were directed to the parking lot at the gatehouse, where shuttle buses drove us to the Library itself.

Arriving At the Library

Personally, I thought the buses were the most impressive part of the Library's Christmas effort. There were enough buses, so they weren't crowded --- there were plenty of open seats in both of the ones we rode in---, and they were equipped with seatbelts. (We had actually been a little concerned about this on our way there.)

Related Post: 12 of the Best Things to Do in Charlotte NC at Night

The drivers were very friendly, with the first one chatting with my mother about his wife's work for the Association and growing up in Alabama. The driver who took us back to the parking lot quietly sang as we drove through the Library Campus.

At the Library itself, there was no line. We were greeted at several tents --- there was a light drizzle --- with volunteers who gave us cheery directions to what we wanted to see.

We wanted to tour the Library itself, but this was where we would’ve been directed to the carriage rides if we'd wanted to enjoy one.

Later, Mom mentioned she'd expected one or two carriages but was surprised by how many there were. Between three and ten horse-drawn carriages taking small groups around the Library's campus, which had been decorated with far too many lights to count.

Mom mentioned the lights to the driver on the way from the parking lot, asking if he had helped put up the lights. He said the Library brought in a separate crew to put them up over the space of several days in what had to be a gargantuan task.

Related Post: 12 of the Most Fun Things to Do in Charlotte

Every tree and bush had lights. There were little wireframe deer in places. It truly was a Winter Wonderland, and a carriage ride through the lanes of the campus would have been a magical experience. (I'm sure parents who took their children on these rides were tickled pink as they watched the little one’s reactions.)

The Association has moved the childhood home of Dr. Graham from its original location to a spot right in front of the Library.

It’s a lovely two-story brick that looks perfect this time of year. When we arrived, there were carolers out front, although they'd gone by the time we left. (The rain had started back up.)

The Library facade looks like a large barn with a Cross as the front entrance, complete with a concrete silo to one side.

Combined with the landscape and the house, it had been decorated for something straight off the front of a Christmas card. Behind the house was a live nativity.

Related Post: 23 Unique Things to Do in Charlotte NC You Don't Want to Miss

Earlier in the night, there had been more live animals there, but they had passed us on the way out. (All the shuttle buses had to pause momentarily as the cattle trailer rolled by us.)

However, there were still sheep and goats beside Mary, Joseph, and the Manger. Both the sheep and the goats were happily nibbling away on the straw they provided.

Most likely, they were providing untold joy to the small children who came by with their parents.

Related Post: 12 of the Best Totally Free Things to Do in Charlotte

The Library is an amazing tribute not just to Doctor Graham but the times he lived in. It's a must-see, but that's for another article.

The Library Lobby houses a Welcome Center, a Bookshop, and a Snack Bar. There was also a huge tree that everyone was getting photos of in front of.  It was so big they had regular size lanterns hanging on it as ornaments.

Ruth’s Attic bookstore feels magical, with glass-covered shelves of books rising to the very high ceiling. The decor is all wood. However, there is a giant bronze statue of a Sower Sowing Seed is in the center of the bookstore.

We couldn't spend as much time there as we would have liked to, but even the hour or two we enjoyed were worth the time on the road and the traffic around Charlotte.

The Billy Graham Library is an amazing place to visit any day of the year, but Christmas is very special.

Whether or not you enjoy the carriage rides or take selfies in front of the tree, it's worth a visit. And the price can't be beaten --- it's free.

So, if you are in the Charlotte area, consider the Billy Graham Library for a visit. Even an hour spent there will make it feel like Christmas, not just winter.

What Was Your Favorite?

Have you visited the Billy Graham Library at Christmas time? If so, what was your favorite memory of this Christmas wonderland? Share with us in the comments below!

D. Lanier Shook lives in Upstate South Carolina, which is right in between the most amazing travel destinations. He was homeschooled without tv, but finds hi ...